Planetrise as seen from closest two-planet system yet found

When the two worlds are closest, say the astronomers, the co-orbiting gas giant planet Kepler-36c would span three times more sky than a full moon does from Earth.

In this artist’s illustration, an extrasolar gas giant planet – known to earthly astronomers as Kepler-36c – looms in the sky of its close neighbor, a rocky volcanic world called Kepler-36b. Astronomers at the Harvard-Smithsonian Center for Astrophysics (CfA) published a study about these two worlds on June 21, 2012. They say these worlds constitute closest two-planet system yet found. When the two worlds are closet, say the astronomers, the co-orbiting gas giant planet Kepler-36c would span three times more sky than a full moon does from Earth. 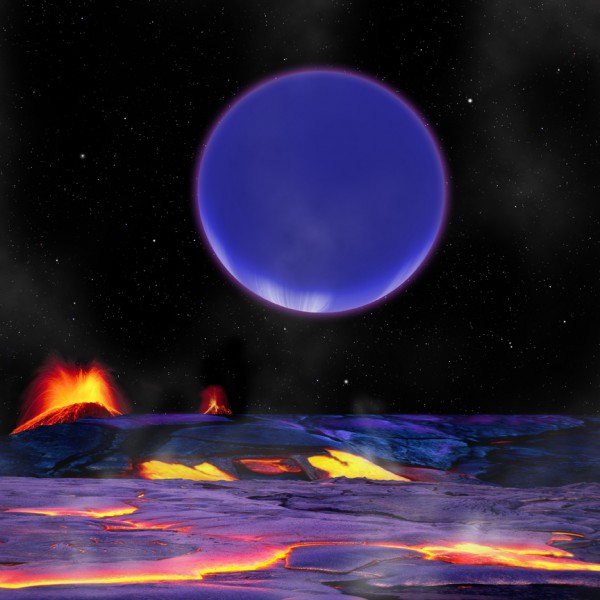 The gas giant planet Kepler_36c looms in the sky of its brother world, a rocky volcanic planet called Kepler-36b, in this artist’s concept. Astronomers say these two worlds are the closest two-planet system yet found. Image Credit: CfA

The astronomers say these two planets in the Kepler-36 system have repeated close encounters, experiencing a conjunction every 97 days on average. At that time, they are separated by less than five Earth-Moon distances. If so, these close approaches would stir up tremendous gravitational tides that squeeze and stretch both planets. These forces could promote active volcanism on Kepler-36b.

These two worlds are having close encounters.

Co-author of the study – Eric Agol of the University of Washington – added:

They are the closest to each other of any planetary system we’ve found.

Read more about this story from CfA