Planet circus in May, with explanation

A beautiful spatial view of our solar system from Guy Ottewell, showing the planets’ paths along their orbits in approximately mid-May, 2017, with sightlines to them from the Earth. 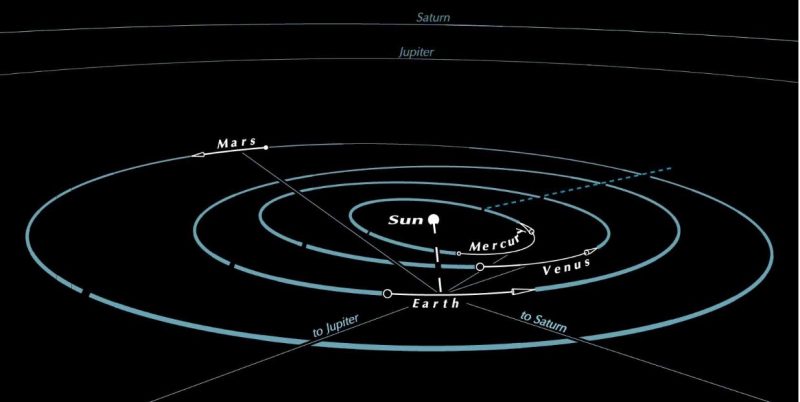 A view of our solar system, as seen from earthly north, for May 2017. The planets are exaggerated 300 times in size, the sun 5 times. A dashed line shows the vernal equinox direction. Via Guy Ottewell. Used with permission.

The five bright planets are scattered widely around the circle, so that we are in an arid period for conjunctions between them. The last was when Venus passed Mars on February 2; the next will be when Mercury comes around in front of Mars on June 28. At present, Mars is the only planet in the sunset scene. Jupiter is higher, not long past its opposition. Saturn is in the high morning sky, rising before midnight. Venus and Mercury – to the “right” (west) of the sun – are in the morning twilight.

Bottom line: A view of our solar system, as seen from earthly north, for May 2017. Illustration by Guy Ottewell.