Planet 9 not affecting Cassini at Saturn

“Although we’d love it if Cassini could help detect a new planet, we don’t see any perturbations in our orbit that we cannot explain with our current models,” said Cassini project manager Earl Maize. 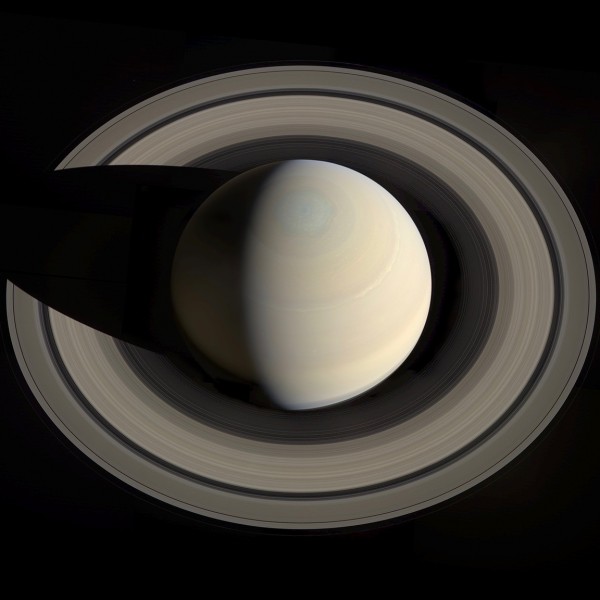 In October 2013, Cassini flew high above Saturn, looking down toward its north pole. It took a series of shots that were then assembled into this amazing mosaic by software engineer Gordan Ugarkovic.

NASA said late in the day on Friday (April 8, 2016) that the hypothetical object known as Planet 9 – which so far has not been discovered – is not affecting the Cassini spacecraft in orbit around Saturn. Contrary to recent reports in the media, Cassini is not experiencing:

… unexplained deviations in its orbit around Saturn.

That’s a lot of “nots” but some people apparently need to hear them. According to recent reports online:

… a mysterious anomaly in Cassini’s orbit could potentially be explained by the gravitational tug of a theorized massive new planet in our solar system, lurking far beyond the orbit of Neptune.

While the proposed planet’s existence may eventually be confirmed by other means, mission navigators have observed no unexplained deviations in the spacecraft’s orbit since its arrival there in 2004.

At this point, Planet 9 is still hypothetical, although astronomers at CalTech said in January that there’s solid evidence for this unseen planet, lurking in the outer solar system.

An undiscovered planet outside the orbit of Neptune, 10 times the mass of Earth, would affect the orbit of Saturn, not Cassini.

This could produce a signature in the measurements of Cassini while in orbit about Saturn if the planet was close enough to the sun. But we do not see any unexplained signature above the level of the measurement noise in Cassini data taken from 2004 to 2016.

Although we’d love it if Cassini could help detect a new planet in the solar system, we do not see any perturbations in our orbit that we cannot explain with our current models.

Read more from NASA about this story

Botton line: Hypothetical Planet 9 is not affecting the Cassini spacecraft, which has been orbiting Saturn since 2004.