No, not Nibiru. Theoretical astronomers describe how a hypothetical Planet 9 could hurtle Jupiter into interstellar space when the sun dies, billions of years from now. 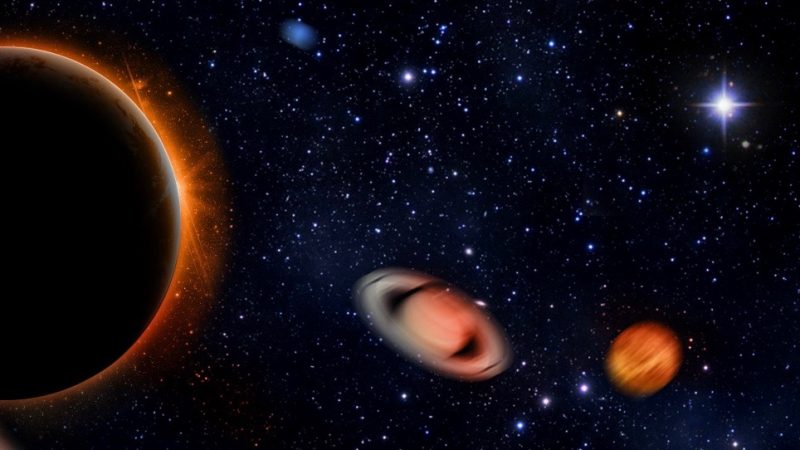 We frequently get messages from an anxious people asking about Nibiru, which doesn’t exist, by the way, but which zealous or uninformed or unscrupulous websites and YouTube videos say is a large planet due for a disastrous encounter with Earth very soon. Actually, it’s supposed to have happened years ago, but who’s counting? Nibiru is one of many internet hoaxes. Meanwhile – confusingly – in scientific circles, there is a hypothetical Planet 9, announced by astronomers in early 2016. Thus astrophysicists at University of Warwick were likely having fun with their famous deadpan British humor, and also perhaps looking for media attention, when they used the words “doom for solar system” in their August 30, 2016 statement about the hypothetical Planet 9 ejecting Jupiter from our solar system after our sun dies, billions of years from now:

The solar system could be thrown into disaster when the sun dies if the mysterious ‘Planet Nine’ exists, according to research from the University of Warwick.

Yes, these are real theoretical astrophysicists – bound by the laws of physics and the power of their computers – not internet hoaxers. It can be hard to tell the difference sometimes, right? One way to tell is to look for publication in peer-reviewed journals like the Monthly Notices of the Royal Astronomical Society , where this work has been accepted.

The work is led by Dimitri Veras of University of Warwick. His group says that the presence of Planet 9 – the hypothetical planet which may exist on the outskirts of our solar system – could cause the elimination of at least one of the giant planets after the sun dies, probably Jupiter, hurling it or them into interstellar space through a sort of ‘pinball’ effect. Veras’ statement explains:

When the sun starts to die in around seven billion years, it will blow away half of its own mass and inflate itself — swallowing the Earth — before fading into an ember known as a white dwarf. This mass ejection will push Jupiter, Saturn, Uranus and Neptune out to what was assumed a safe distance.

However, Dr. Veras has discovered that the existence of Planet 9 could rewrite this happy ending. He found that Planet 9 might not be pushed out in the same way, and in fact might instead be thrust inward into a death dance with the solar system’s four known giant planets — most notably Uranus and Neptune. The most likely result is ejection from the solar system, forever.

Using a unique code that can simulate the death of planetary systems, Dr. Veras has mapped numerous different positions where a ‘Planet 9’ could change the fate of the solar system. The further away and the more massive the planet is, the higher the chance that the solar system will experience a violent future.

Veras and his group point out that their work sheds light not just on the fate of our solar system, but also on:

… planetary architectures in different solar systems. Almost half of existing white dwarfs contain rock, a potential signature of the debris generated from a similarly calamitous fate in other systems with distant ‘Planet 9s’ of their own.

In effect, the future death of our sun could explain the evolution of other planetary systems.

By the way, the soon-to-be-published paper of these astronomers will be given the less provocative title of ‘The fates of solar system analogues with one additional distant planet.’ Look for it soon in the Monthly Notices of the Royal Astronomical Society.

Want to know more about hypothetical Planet 9 at our solar system’s outskirts? Remember, it hasn’t been discovered. So far, it’s just a very, very educated and high tech conjecture. The video below explains more:

And back to Nibiru, just for a moment. It’s supposedly “revealed near the sun” in photos. The photos I’ve seen all actually show either the brightest planet Venus (now low in the west after sunset) or, more often, lens flares. Lens flares often appear on photos as globes of light near bright objects such as the sun or moon. We see a lot of them here at EarthSky, on photos submitted by our community. They’re not really objects in the sky. They’re internal reflections from peoples’ cameras. Read more about lens flares. 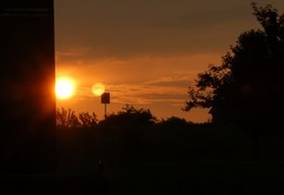 I found this photo on a website about Nibiru, but it’s really a lens flare, an internal reflection from the photographer’s camera.

Bottom line: Theoretical astrophysicists at University of Warwick announced on August 30, 2016 that a hypothetical Planet 9 could hurtle Jupiter into interstellar space when the sun dies, billions of years from now.