This candy-pink lagoon in Spain is providing valuable clues about how extremophile microorganisms might exist on Mars despite the planet’s harsh conditions.

This lagoon in central Spain – called Laguna de Peña Hueca – has pink-colored water, derived from the red cells of an extremophile microorganism. Scientists say it can provide clues to Mars life. Image via Europlanet/F. Gómez/R. Thombre.

Is there – or has there – been life on Mars? We still don’t conclusively know the answer to that question, but scientists keep finding new clues suggesting that maybe life on the planet did, or even still does, exist. For example, the Curiosity Mars rover has found evidence for an ancient lake and preserved organic material in Gale crater, although direct evidence of life itself is still elusive. Now, a new study describes a remarkable microorganism in a candy-pink lagoon in central Spain, about 60 miles (100 km) south of Madrid. The study suggests that similar kinds of life could survive in highly salty conditions on Mars.

Scientists presented the findings last week (September 16-21) at the European Planetary Science Congress 2018. They also reported them via Europlanet, which is the Congress’s parent organization.

Because of its salt and sulphur deposits, this lagoon in Spain is considered a good analog for chloride deposits found in the southern highlands of Mars and the briny ocean water beneath Europa’s icy crust. 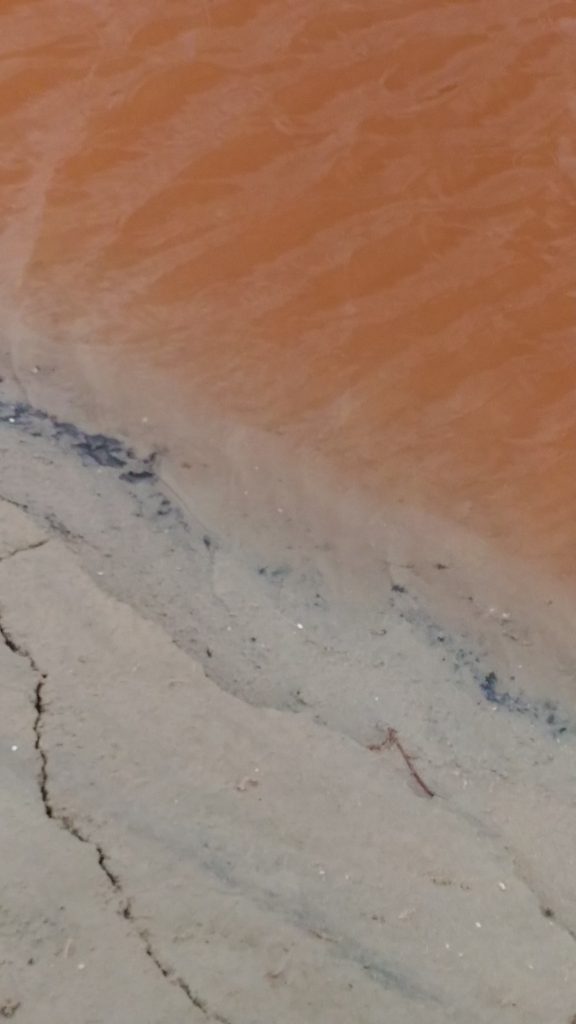 Closer view of the pinkish water in the lagoon. Image via Europlanet/F. Gómez/R. Thombre.

The researchers wanted to know what gives the lagoon its distinctive pink color. Biochemist Felipe Gómez of the Centro de Astrobiologia in Spain and Rebecca Thombre of Modern College in Pune, India collected samples of lagoon water for the study. After isolating the microbes, they studied their physical characteristics and genetic sequences. They found that the red cells of a sub-genus of the salt-loving algae Dunaliella were responsible for the pinkish color of the water. Dunaliella is an algal strain found in the lagoon and has been named Dunaliella salina EP-1 after the Europlanet 2020 Research Infrastructure. As explained by Dr. Thombre:

Dunaliella salina EP-1 is one of the most salt-tolerant extremophiles that we’ve found. Microbes find it difficult to tolerate hypersaline environments because water needed for the cell to function tends to flow out through the cell-membrane into the salty surroundings. The algae survive the conditions at Peña Hueca by producing molecules like glycerol that mimic the external salt concentrations within the cell and counteract water-loss.

The results add to previous studies showing how such extremophiles could survive on Mars even today, when conditions are much harsher than they used to be billions of years ago. The martian surface is considered extremely hostile even to extremophiles, but many researchers think that such organisms could easily still exist below the surface, especially given the recent discovery of a salty subsurface lake deep below ice near the south pole, the first time that liquid water has been confirmed to currently exist on Mars. As Dr. Gómez noted:

The resilience of extremophiles to the conditions of Mars analogs on Earth demonstrate their potential to thrive in martian soils. This has implications for planetary protection, as well as how algae might be used to terraform Mars. 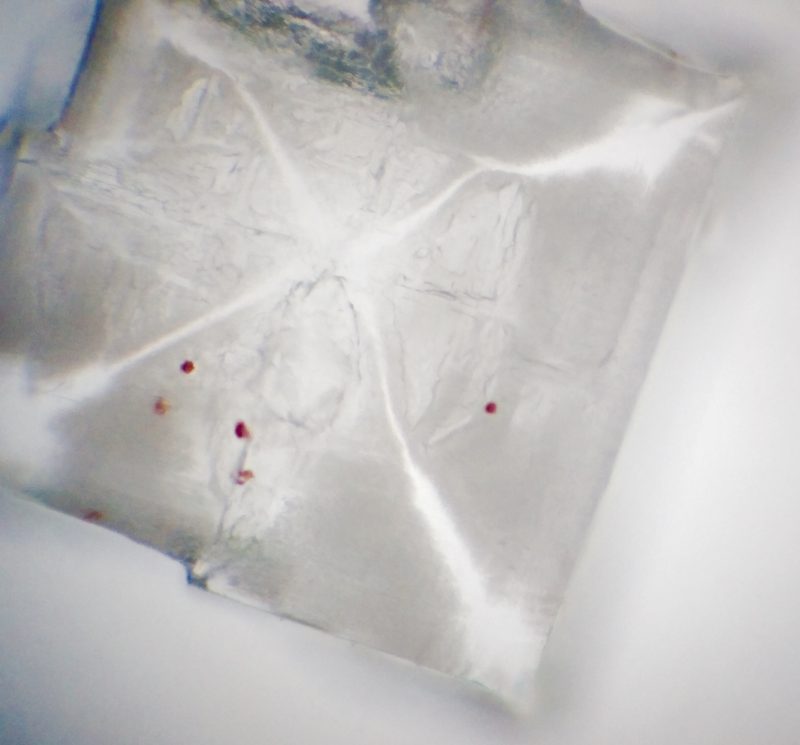 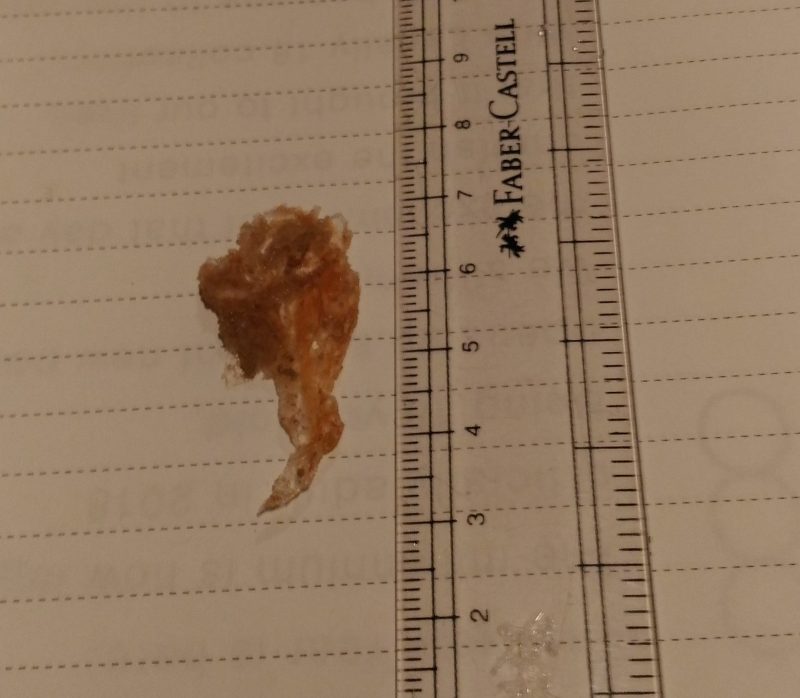 A closer view of a sample of the extremophilic algal strain from Laguna de Peña Hueca, which has been named Dunaliella salina EP-1. Image via Europlanet/F. Gomez/R. Thombre.

The discovery of this microbe also has applications beyond the search for life on other planets or moons. The cells of Dunaliella algae are used in many countries for the industrial production of carotenoids – ß-carotene, glycerol, bioactives, biofuel and antioxidants – so the strain EP-1 could be used for a wide range of biotechnologies. According to Dr. Thombre:

Considering the commercial and economic significance of this organism, future studies are warranted to gain a complete picture of its physiology, ecology and biotechnological potential. 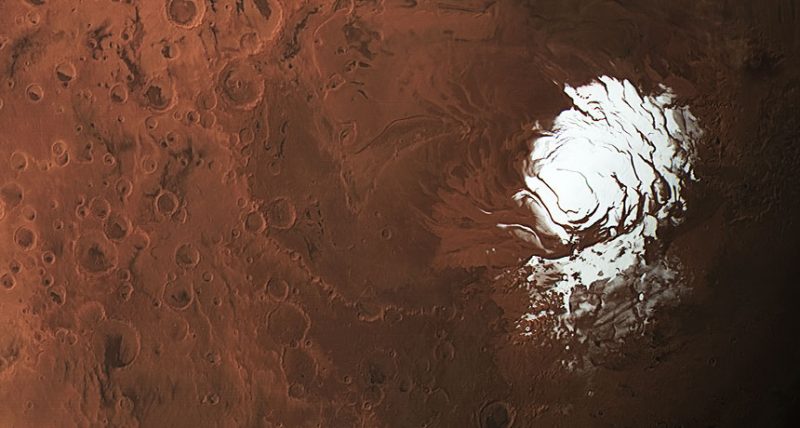 A salty subsurface lake has been found deep under the ice near the martian south pole. Such an environment could be ideal for microorganisms similar to the ones discovered in the lagoon in Spain. Image via ESA/DLR/FU BERLIN (CC BY-SA 3.0 IGO).

Besides Dunaliella salina EP-1, the researchers also found another halophilic bacteria, Halomonas gomseomensis PLR-1, in a pink rock embedded in the sulphate-rich brine of the lagoon. The scientists say that it will help them understand the role of sulphates in microbial growth and lithopanspermia – the theory that organisms can be transferred in rocks from one planet to another. 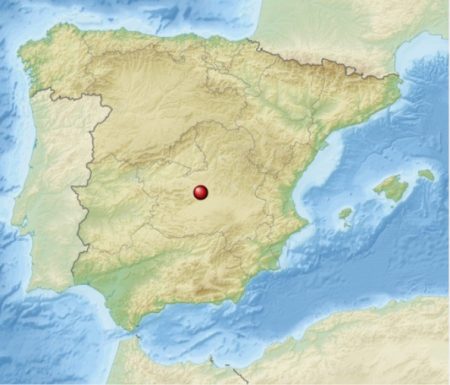 Bottom line: Extremophiles such as Dunaliella salina EP-1 are providing valuable clues as to what kind of microorganisms could have existed on Mars or could still thrive there today. Underground pockets or lakes of water, even if highly salty, may be the best places to look, if their analogs on Earth are any indication.

Source: Extremophiles from Tirez and Peña Hueca: Implications for exploring habitability of Mars and Europa