Piecing together a color map of Saturn’s largest moon

Scientists piece together six years of images from the Cassini mission to create a mosaic of the surface of Titan — Saturn’s largest moon.

An international team of scientists led by the University of Nantes (France) has pieced together images gathered over six years by the Cassini mission – which has been orbiting Saturn since 2004 – to create a global mosaic of the surface of Saturn’s largest moon Titan.

We cannot see Titan’s surface directly, because it is veiled by a thick, opaque atmosphere.

The team compiled all the infrared images acquired by the Visual and Infrared Mapping Spectrometer (VIMS) during Cassini’s first 70 flybys of Titan. The images were corrected for differences in illuminating conditions, and each image was filtered on a pixel-by-pixel basis to screen out atmospheric distortions. 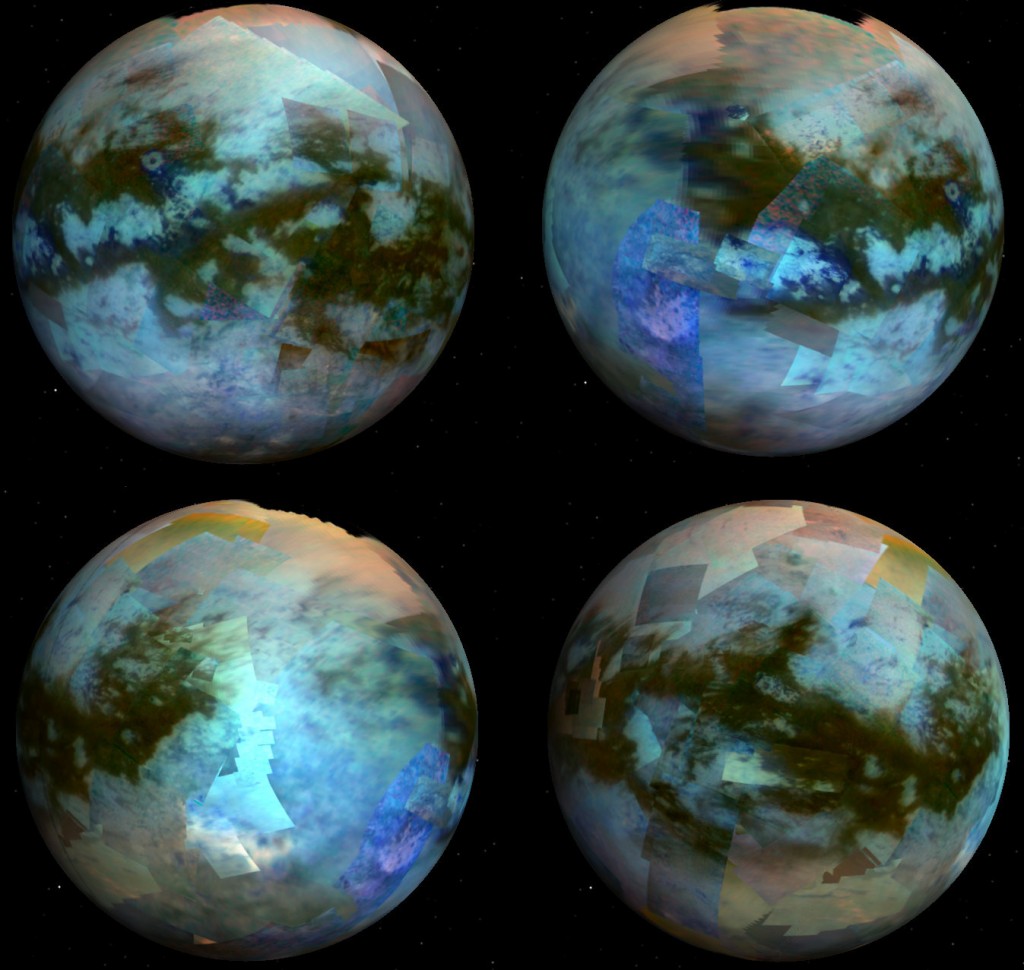 Subtle colors in this mosaic reveal the diversity of terrains on Titan, such as the brownish equatorial dune fields and the bright elevated regions. Image Credit: JPL/NASA/UA/CNRS/LPGNantes

Titan is the only natural satellite known to have a dense atmosphere, and it is the only object other than Earth for which clear evidence of stable bodies of surface liquid has been found. It is sometimes described as a planet-like moon. It’s atmosphere consists mainly of nitrogen, with clouds of methane and ethane, and there is increasing evidence for methane rain. Only a few specific infrared wavelengths can penetrate the cloud and haze to provide a window down to Titan’s surface.

An exotic frozen world with many Earth-like geological features has gradually emerged from darkness.

The global maps and animations of Saturn’s largest moon shown on this page were presented in Nantes on October 4, 2011, at a joint meeting of the European Planetary Science Congress (EPSC) and the Division for Planetary Sciences (DPS) of the American Astronomical Society (AAS).

As Cassini is orbiting Saturn and not Titan, we can observe Titan only once a month on average. The surface of Titan is therefore revealed year after year, as pieces of the puzzle are progressively put together. Deriving a final map with no seams is challenging due to the effects of the atmosphere – clouds, mist etc. – and due to the changing geometries of observation between each flyby.

Cassini has made 78 flybys of Titan since it arrived in orbit around Saturn in July 2004. On flybys to date, VIMS has had only a few opportunities to observe Titan with a high spatial resolution. This means that the global map currently shows some regions of Titan in more detail than others. 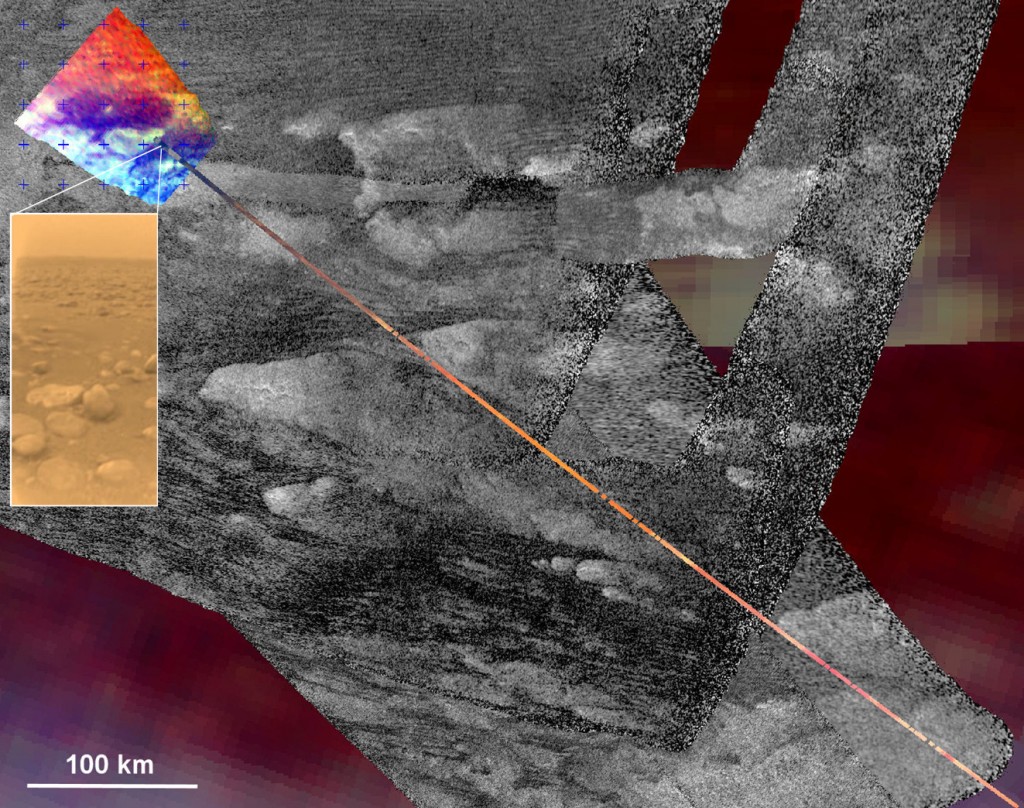 VIMS observations of the Huygens landing site, plotted over a radar background. The surface seen by Huygens is shown in the inset. Image Credit: JPL/NASA/UA et al

In addition to improving the spatial coverage, future mapping will allow the observation of seasonal changes in both the atmosphere and the surface. As spring comes to the northern hemispheres of Saturn and its moons, some areas are only now coming into view.

Observations of the northern seas of Titan by VIMS (left and center) and by Radar (right). Image Credit: JPL/NASA/UA et al

Lakes in Titan’s northern hemisphere were first discovered by the RADAR instrument in 2006, appearing as completely smooth areas. However, we had to wait up to June 2010 to obtain the first infrared images of the northern lakes, emerging progressively from the northern winter darkness. The infrared observations provide the additional opportunity to investigate the composition of the liquids within the lakes area. Liquid ethane has already been identified by this means.

Bottom line: University of Nantes (France) researchers and their international colleagues have pieced together a color map of Titan’s surface using images acquired by the Visual and Infrared Mapping Spectrometer (VIMS) during Cassini’s first seventy flybys of Titan. They presented their work at a joint meeting of the European Planetary Science Congress (EPSC) and the Division for Planetary Sciences (DPS) of the American Astronomical Society (AAS), October 4, 2011.