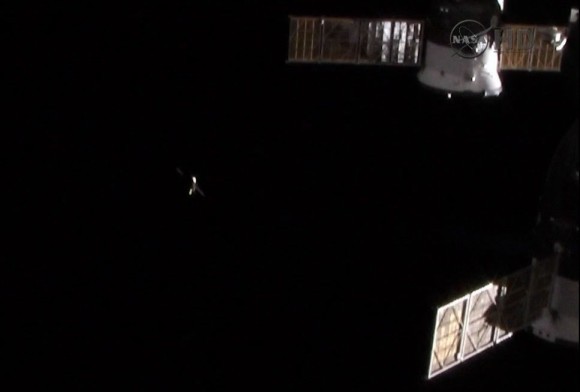 View larger. | The ISS Progress 53 cargo ship can be seen in the distance following its undocking from the International Space Station. Another Progress and a Soyuz spacecraft, both docked to the station, can be seen on the right. Image credit: NASA TV

An unpiloted Russian Progress cargo spacecraft undocked from the International Space Station (ISS) Monday, completing its second and final undocking from the station since arriving in late November 2013.

The ISS Progress 53 resupply craft undocked from the aft port of the Zvezda service module at 9:29 a.m. EDT as the station orbited over Mongolia.

From a window in the Russian segment of the station, Expedition 40 Flight Engineer Alexander Skvortsov photographed the departing Progress cargo ship as it began a 15-second separation burn to move a safe distance away from the orbiting complex (above.) 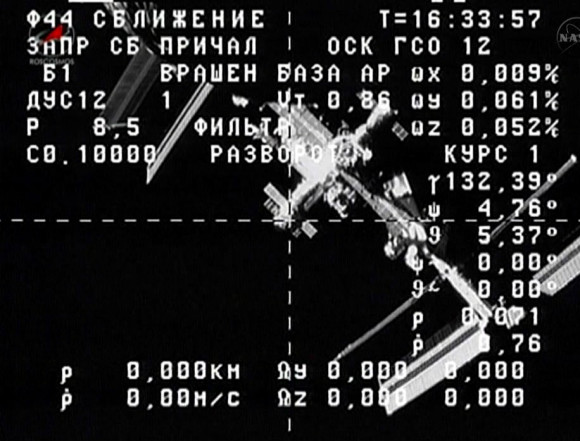 A 3-minute, 16-second deorbit burn beginning at 12:34 p.m. will slow the progress for its destructive re-entry in the Earth’s atmosphere over the Pacific Ocean less than an hour later. Progress resupply ships are not designed to be recovered, so, like its predecessors, Progress 53 was refilled with trash and station discards after its original cargo was unloaded by the station crew.