Yay, several of you did take our challenge and spot the October 14, 2012 very old moon! Thank you, Peter Rodney Breaux, Lakshmi Ravishankar and Julie Gartman!

On Saturday, we challenged you all to look for the October 14, 2012 old moon in the east before dawn. Thank you so much for accomplishing it, and thank you for sharing these images. The first two are from our Facebook friend Peter Rodney Breaux in Los Angeles. His photos of this morning’s moon are particularly striking for several reasons. First, as dawn broke around the world over the past day, the moon was waning and becoming slimmer and slimmer, moving closer to the sunrise glare. Peter, on the west coast of the U.S., spotted this moon when it was around 22 hours from the new phase. It’s quite an accomplishment! Congratulations, Peter! 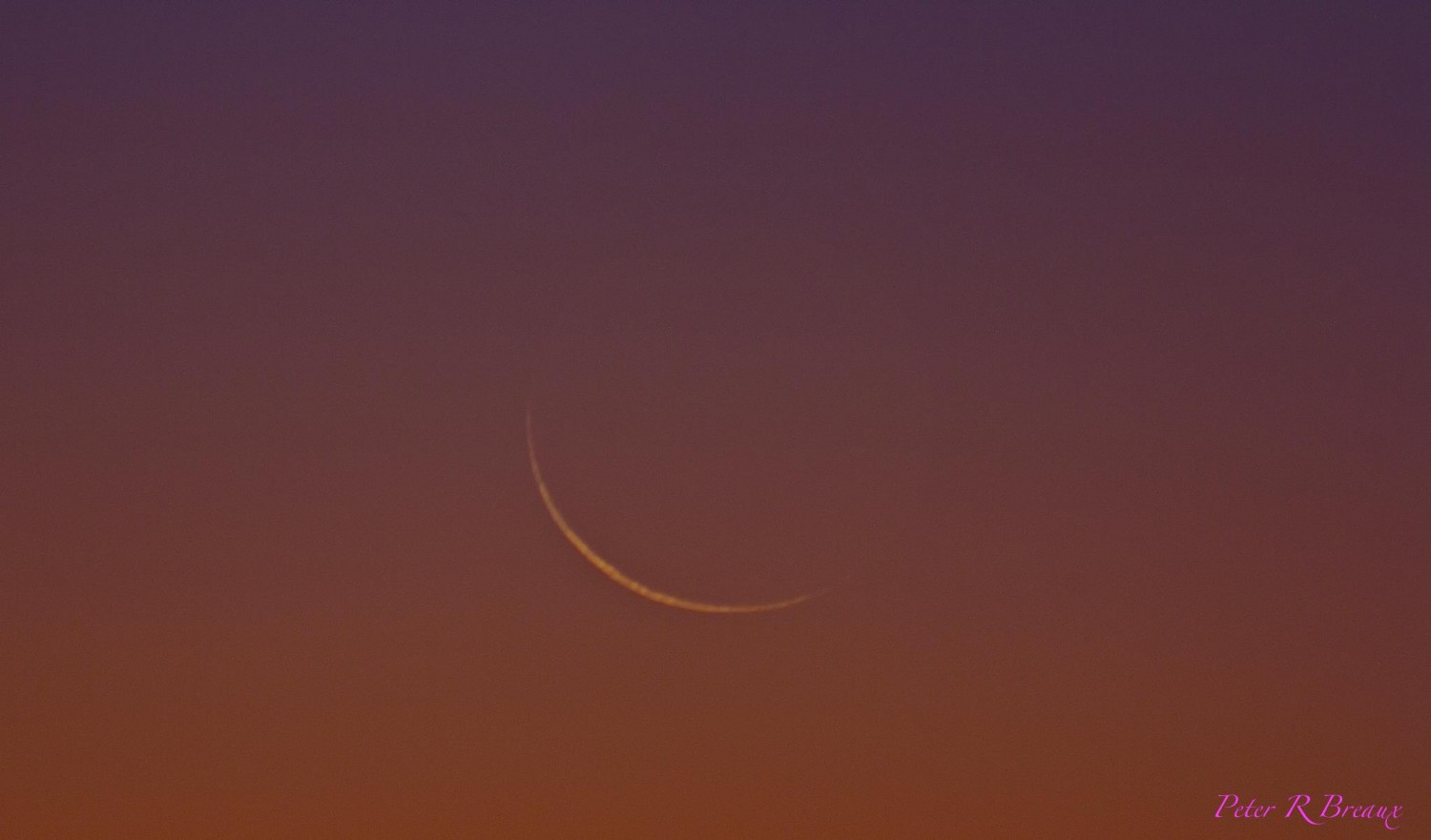 Old moon on morning of October 14, 2012 as seen by our friend Peter Rodney Breaux in Los Angeles. This moon is around 22 hours from the new phase. It was visible only shortly before dawn and must have been an amazing sight to the eye! Thank you, Peter. Click here to expand image. 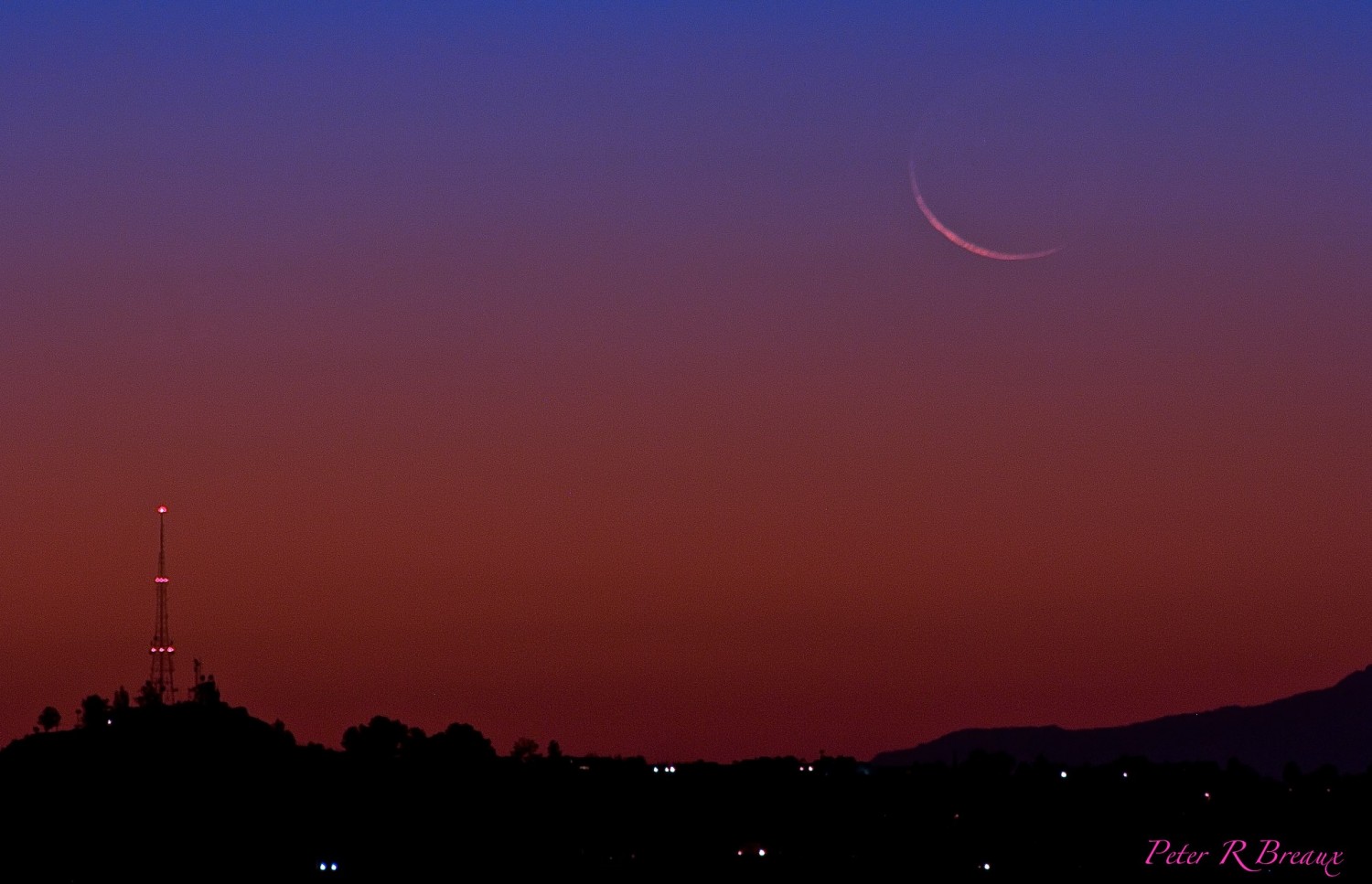 EarthSky, thanks for encouraging me to look for her this morning. Yesterday I though for sure we wouldn’t see her today. But with favorable weather conditions, there she was. Los Angeles. 10-14-12. 06:14 a.m.

Why is the month of October – or, more generally, the autumn months – a great time for seeing an old moon? The old moon is an informal name for the waning crescent moon seen in the east before dawn. From the Northern Hemisphere, autumn is a great time for spotting planets in our solar system – or the moon – in the early morning eastern sky, because the ecliptic – or path of the sun, moon and planets – is nearly perpendicular to the eastern horizon before dawn at this time. That means the distance of solar system objects from the sunrise is nearly all straight up above the horizon, not sideways along the horizon as at other times of years (for example, in the evening around now). So objects like old moons, or planets near the sunrise, are easier to spot.

Peter wasn’t the only one who posted on our Facebook page today with October 14 old moon images. Lakshmi Ravishankar in Pune, India caught a time-lapse video of the moon rising in the east. Isn’t it cool? The moon Lakshmi saw was a few hours further from new than the one Peter saw. Still, it’s an accomplishment to spot a moon so close to the sunrise, and we very much appreciate this video.

The moon was slightly more than 24 hours from the new phase when Julie Gartman in Kitty Hawk, North Carolina spotted the very slim crescent ascending above the Atlantic Ocean. Her photo is below. 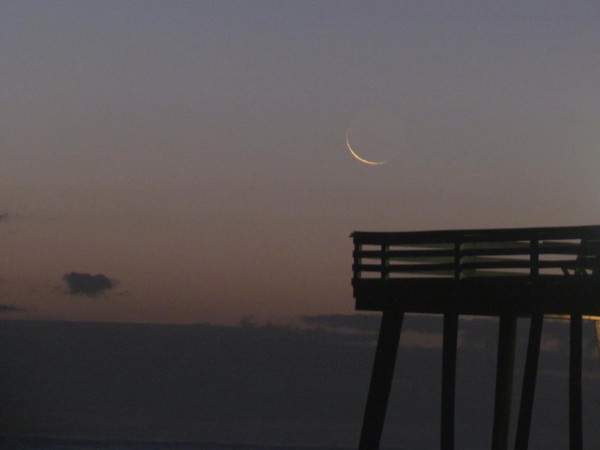 Old moon of October 14, 2012 ascending in the east, over the Atlantic Ocean, with Kitty Hawk Pier in the foreground. EarthSky Facebook friend Julie Gartman captured this photo. Thank you, Julie.

Bottom line: Yay, several of you did take on our challenge and spot the October 14, 2012 very old moon! Thank you, Peter Rodney Breaux, Lakshmi Ravishankar and Julie Gartman! Your photos and video of the very slim waning moon – visible only shortly before the October 14 sunrise – are beautiful.

Read the original challenge: Will you see your oldest moon yet before sunrise October 14?

What is the youngest moon you can see?