Cassini ended its 13-year mission at Saturn a year ago, when it plunged into the giant planet’s atmosphere. Now the Hubble Space Telescope is keeping an eye on the planet. 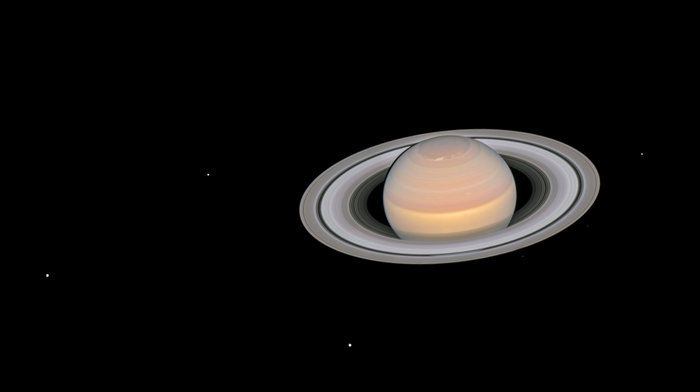 View larger. | June 6, 2018, composite image of Saturn and its moons via ESA/Hubble.

The Hubble Space Telescope captured this composite image of Saturn on June 6, 2018, shortly before the ringed planet reached its opposition for this year. In other words, it caught Saturn around the time Earth and Saturn were closest for 2018. The European Space Agency (ESA), which released this image on September 10, said:

The image shows Saturn with six of its 62 known moons. From left to right, the moons visible in this image are Dione, Enceladus, Tethys, Janus, Epimetheus, and Mimas. The moons seen here are all icy and cratered. Enceladus is considered a candidate for the existence of primitive life because it is outgassing water vapor from a subsurface ocean. Based on data from the Cassini mission to Saturn, scientists hypothesize that a small, wayward moon like one of these disintegrated 200 million years ago to form Saturn’s ring system.

The image is a composite because the moons move during the Saturn exposures, and individual frames must be realigned to make a color portrait.

Read more: It’s been a year since Cassini plunged into Saturn