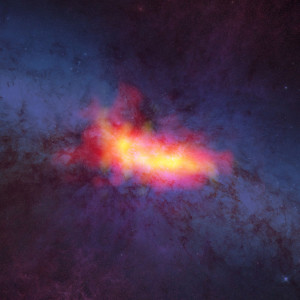 This composite image of starburst galaxy M82 shows the distribution of dense molecular gas as seen by the GBT (yellow and red) and the background stars and dust as seen by Hubble (blue). The yellow areas correspond to regions of intense star formation. The red areas trace outflows of gas from the disk of the galaxy.

Thank you! Your submission has been received!
Oops! Something went wrong while submitting the form.
END_OF_DOCUMENT_TOKEN_TO_BE_REPLACED