What the Philae comet lander found 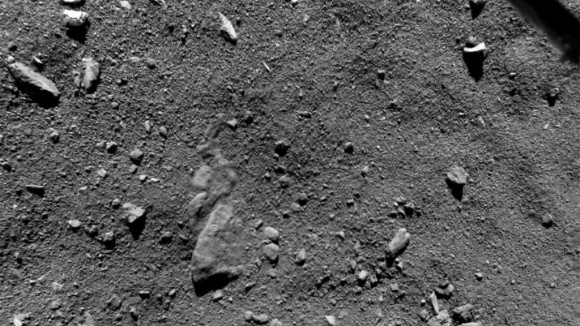 A photograph of the surface of Comet 67P at Agilkia, Philae’s intended landing site, from a height of just nine meters, taken with the ROLIS camera. Image credit: ESA/Rosetta/Philae/ROLIS/DLR

Though Rosetta’s little lander Philae made an unexpected bounce across the surface of Comet 67P/Churyumov-Gerasimenko, and is now playing a game of hide-and-seek with mission controllers, it has already provided a wealth of information about its strange new home.

In particular, it has identified complex molecules dating from the early Solar System that could have been ingredients in the recipe that delivered life to our planet. Those results, and findings from other experiments were published last week in the journal Science.

Philae was pre-programmed to carry out a number of experiments as soon as it landed at its designated site, Agilkia, on November 12, 2014 following a seven hour descent from the mothership. One was to “sniff the air” so that experiments COSAC (Cometary Sampling and Composition) and Ptolemy could determine the chemical make-up of the gas and dust being given off by the comet.

Unexpectedly, the probe did its sniffing while it was in flight again above the comet, because the harpoons had failed to fire to anchor it to the surface. However, both experiments successfully took samples. COSAC was able to analyze material that was kicked off the surface on first touchdown and entered tubes at the base of the lander. At the same time, Ptolemy got a taste of gas entering tubes at the top of Philae.

COSAC collected ice-poor dust grains that contained 16 organic compounds, including many rich in carbon and nitrogen compounds. But it also detected four that had never been seen in a comet before—methyl isocyanate, acetone, propionaldehyde and acetamide.

Ptolemy’s samples were of gases making up the “atmosphere”, or coma, of the comet, and included water vapor, carbon monoxide and carbon dioxide, plus smaller amounts of carbon-bearing organic compounds, including formaldehyde.

What excites the scientists is that some of these compounds are important for the production of the buildings blocks of life, including amino acids, sugars and nucleobases. Because comets are leftover debris from the formation of the Solar System, more than four billion years ago, the presence of the compounds suggests that life’s ingredients were coming together in chemical processes even at that early stage. 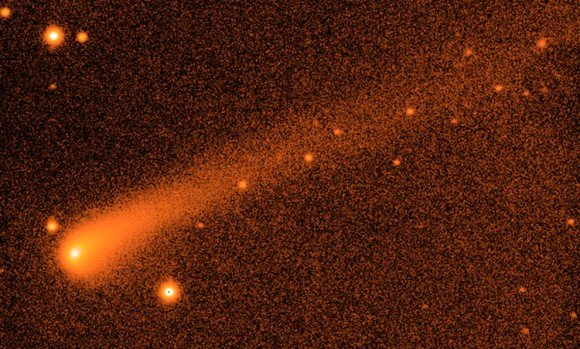 Writing for academic news site The Conversation, UK comet expert Professor Monica Grady gave her view on the discovery. She is married to Professor Ian Wright, who works with the Ptolemy results at the Open University. Grady said:

While this is a long, long way from finding life itself, the data shows that the organic compounds that eventually translated into organisms here on Earth existed in the early solar system.

One of the declared goals of the Rosetta mission when it was approved in 1993 was to determine the composition of volatile compounds in the cometary nucleus. And now we have the answer, or at least, an answer: the compounds are a mixture of many different molecules. Water, carbon monoxide (CO) and carbon dioxide (CO2)—this is not too surprising, given that these molecules have been detected many times before around comets. But both COSAC and Ptolemy have found a very wide range of additional compounds, which is going to take a little effort to interpret.

Most importantly, both of those sets of data show that the ingredients for life were present in a body which formed in the earliest stages of Solar System history. Comets act as messengers, delivering water and dust throughout the Solar System—now we have learnt for certain that the ingredients for life have been sown far and wide through the 4.567 billion years of Solar System history. The challenge now is to discover where else it might have taken root.

The fact Philae landed three times as it bounced to its final resting place in a region called Abydos means that the scientists got data from more than one site and have been able to compare different regions. That included surface properties and details of the comet’s interior. As it descended, and on final touchdown, the probe also imaged parts of the comet up close with its ROLIS and CIVA cameras, providing details about boulders littering the surface and the coarse soil.

Philae’s MUPUS instruments found that Abydos has harder material, probably compacted dust and ice, at the surface than Agilkia, where Philae first bounced. MUPUS also measured a variation in temperature between -180°C and -145°C as the comet rotated in its 12.4 hour daily cycle. Another experiment, CONSERT, used instruments on Rosetta and Philae to beam radio waves through the comet’s nucleus, revealing that its smaller lobe is a fairly homogeneous mix of loosely-compacted dust and ice.

Professor Jean-Pierre Bibring, a lead lander scientist and principal investigator of the CIVA instrument, said in a statement:

Taken together, these first pioneering measurements performed on the surface of a comet are profoundly changing our view of these worlds and continuing to shape our impression of the history of the solar system.

Nothing has been heard from the lander since July 9, following occasional, intermittent contact after it “phoned home” on June 13, ending seven months of silence. Since July 25, Rosetta has moved into a position where it can explore Comet 67P’s southern landscape in the run-up to Perihelion, its closest point to the sun, and from there it will be unable to communicate with Philae anyway. But in a couple of weeks, it will be within range again, and the science team will be hoping to establish contact with the lander once more.