NASA says the annual Perseid meteor shower produces more fireballs than any other. Although the shower’s peak is still some days away, the fireballs are here!

Spaceweather.com is reporting that Bill Cooke, head of NASA’s Meteoroid Environment Office, has been seeing Perseid fireballs since July 30, 2013. The Perseid meteor shower is just beginning now, with its peak on the mornings of August 11-13. In other words, Earth is already passing through a stream of icy debris in space, left behind by Comet 109P/Swift-Tuttle. And the fireballs are already arriving, too. Cooke said that, since July 30, his group’s cameras have detected six Perseid fireballs. He made this plot showing the orbits of the meteoroids: 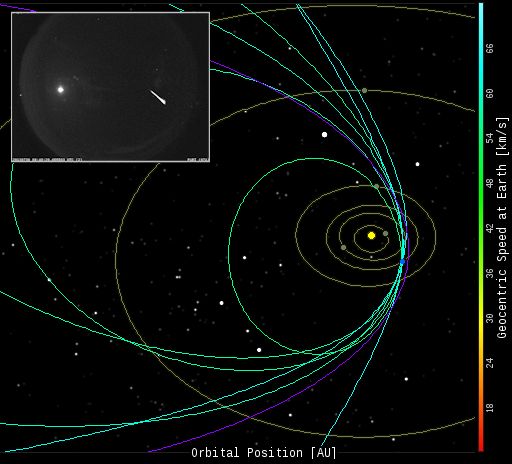 Green lines illustrate the paths of Perseid meteoroids, traveling in space. All six intersect Earth (the blue dot). The orbit of Comet Swift-Tuttle is the purple line. An inset shows one of the fireballs shining almost as brightly as the moon.

What are Perseid fireballs? New research by NASA scientists has revealed them. Using a network of meteor cameras distributed across the southern USA, Cooke’s team has been tracking fireball activity since 2008, and they have built up a database of hundreds of events to analyze. The data point to the Perseids as the ‘fireball champion’ of annual meteor showers.

A fireball is a very bright meteor, at least as bright as the planets Jupiter or Venus. Fireballs can be seen on any given night as random meteoroids strike Earth’s upper atmosphere. One fireball every few hours is not unusual. Fireballs become more numerous, however, when Earth is passing through the debris stream of a comet. That’s what will happen this August.

Cooke thinks the Perseids are rich in fireballs because of the size of the parent comet. He said:

Comet Swift-Tuttle has a huge nucleus–about 26 km in diameter. Most other comets are much smaller, with nuclei only a few kilometers across. As a result, Comet Swift-Tuttle produces a large number of meteoroids, many of which are large enough to produce fireballs.

Cooke recommends looking on the nights of August 12 and 13 between the hours of 10:30 PM to 4:30 AM local time. EarthSky recommends adding the night of August 11, too. Before midnight the meteor rate will start out low, then increase as the night wears on, peaking before sunrise when the constellation Perseus is high in the sky.

Since 2008, the Perseids have produced more fireballs than any other annual meteor shower. The Geminids are a close second, but they are not as bright as the Perseids. “The average peak magnitude for a Perseid observed by our cameras is -2.7; for the Geminids, it is -2,” explains Bill Cooke. “So on average, Geminid fireballs are about a magnitude fainter than those in the Perseids.”

For every fireball that streaks out of Perseus, there will be dozens more ordinary meteors.

In total, the Perseid meteor rate from dark-sky sites could top 100 per hour on the peak nights of August 11-13.

Bottom line: Bill Cooke, head of NASA’s Meteoroid Environment Office, has reported seeing Perseid fireballs since July 30, 2013. He and his team have been tracking annual meteor showers since 2008 and have determined that the Perseids produce more fireballs – more very bright meteors, at least as bright as the planets Jupiter or Venus – than any other annual shower.

Via NASA and Spaceweather.com