Peering beneath Jupiter’s clouds, via radio 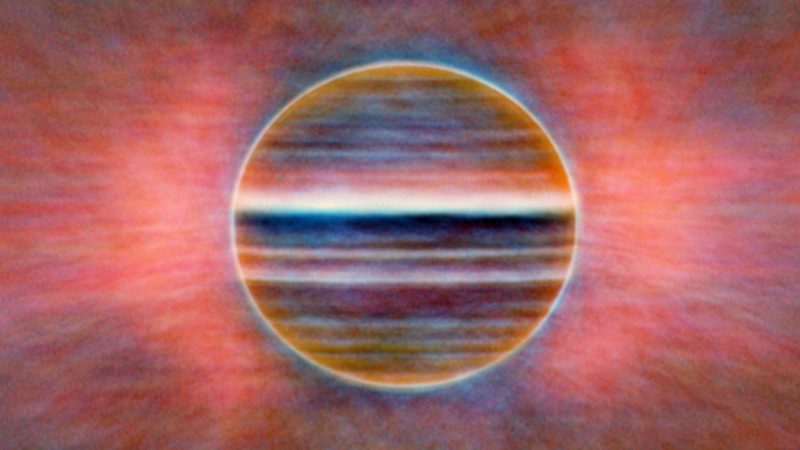 Astronomers used the Karl G. Jansky Very Large Array – west of Socorro, New Mexico – to make the image above of our solar system’s largest planet, Jupiter. It’s part of a comprehensive new research study of the planet, showing it at radio wavelengths, resulting in what astronomers said in a statement is:

… the most detailed radio map yet of the atmosphere of Jupiter.

The image shows the the planet at three wavelengths: 2 cm in blue, 3 cm in gold, and 6 cm in red. A uniform disk has been subtracted to better show the fine banded structure on the planet. The pink glow surrounding the planet is synchrotron radiation produced by spiraling electrons trapped in Jupiter’s magnetic field.

The astronomers said that banded details on the planet’s disk let them probe to depths of about 20-60 miles (30-90 km) below Jupiter’s cloudtops. They said this region of the planet is:

The video below – from the same radio study of Jupiter – is interesting, too. It’s a simple alternation of two overlaid maps of Jupiter, one optical and the other radio, showing what the atmosphere looks like under the surface clouds.

Read more about the radio study of Jupiter, via UC Berkeley

By the way, the astronomers released these radio images on June 2, 2016, about a month before the Juno spacecraft will arrive at Jupiter. In late May, the spacecraft crossed what scientists call the Jupiter/sun gravitational boundary. In other words, Jupiter’s gravity – not the sun’s gravity – is now the primary force directing the craft. Juno will arrive at Jupiter on July 4, 2016. It’ll be the second spacecraft to orbit Jupiter, following the Galileo probe which orbited from 1995–2003.

So enjoy these radio images – and get ready for some new and astounding spacecraft images – of our solar system’s largest world!

Bottom line: New study of Jupiter shows detailed views of the planet at radio wavelengths. Astronomers used the Very Large Array in New Mexico to create them. They say the work reveals what lies 100 km below Jupiter’s cloudtops, a mostly unexplored region of Jupiter’s atmosphere.