Scientists say comet dust is the invisible paint causing the surface of the innermost planet Mercury to be only barely reflective. 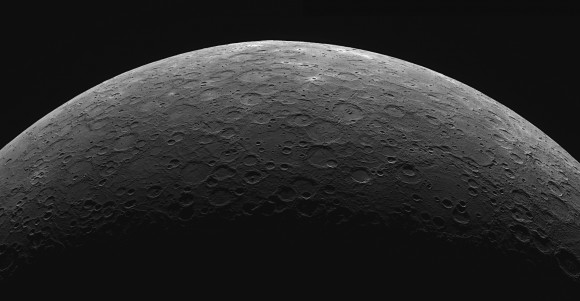 Scientists announced this morning (March 30, 2015) that Mercury’s dark, barely reflective surface may be the result of a steady dusting of carbon from passing comets. In other words, over billions of years, comets have slowly painted Mecury’s surface black. The scientists published in the journal Nature Geoscience.

A body’s reflectivity is called its albedo by astronomers. One of the most reflective worlds in our solar system – a world with a very high albedo – is Saturn’s moon Enceladus, whose surface is covered by highly reflective ice. Now think of the opposite end of the albedo scale, of a dark surface, like that of Mercury. What could make a planet’s surface so dark? In fact, the dark surface of the sun’s innermost world has long been a mystery to scientists. According to a statement from Brown University:

On average, Mercury is much darker than its closest airless neighbor, our moon. Airless bodies are known to be darkened by micrometeorite impacts and bombardment of solar wind, processes that create a thin coating of dark iron nanoparticles on the surface.

But spectral data from Mercury suggests its surface contains very little nanophase iron, certainly not enough to account for its dim appearance.

Megan Bruck Syal is a postdoctoral researcher at Lawrence Livermore National Laboratory. She performed this research while a graduate student at Brown. She said:

One thing that hadn’t been considered was that Mercury gets dumped on by a lot of material derived from comets. 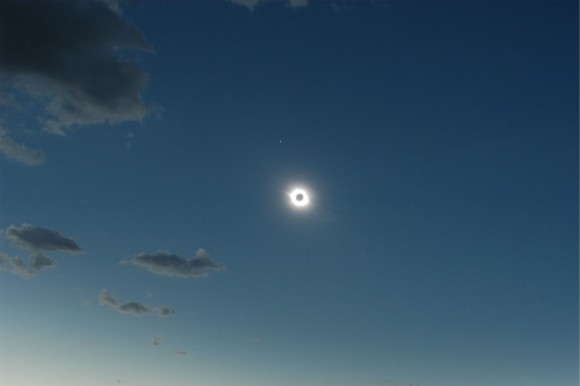 If you ever see a total eclipse of the sun, like the one in this photo by Paul D. Maley, you might see a little dot near the sun – Mercury! That’s because Mercury is the sun’s innermost planet. It orbits in the same realm of the solar system as many comets when they are at their closest to the sun, and hence at their most active.

Like planets, comets are bound in orbit by the sun. But unlike planets, many comets have highly elliptical orbits; that is, they swing out far from the sun at the outer part of their orbit, then dive in close to the sun, sometimes very close. Little Mercury is in the part of the solar system where many comets are coming nearest the sun in their orbits. At such times, comets are at their most active. The Brown University statement said:

As comets approach Mercury’s neighborhood near the sun, they often start to break apart. Cometary dust is composed of as much as 25 percent carbon by weight, so Mercury would be exposed to a steady bombardment of carbon from these crumbling comets.

Using a model of impact delivery and a known estimate of how many micrometeorites might be expected to strike Mercury, Megan Bruck Syal was able to estimate how often cometary material would impact Mercury, too. She also showed how much carbon would stick to Mercury’s surface, and how much would be thrown back into space.

Her calculations suggest that, after billions of years of bombardment, Mercury’s surface should be anywhere from 3 to 6 percent carbon.

How much would Mercury darken, via all that impacting carbon? To find out, the team turned to the NASA Ames Vertical Gun Range. The 14-foot canon simulates celestial impacts by firing projectiles at up to 16,000 miles (about 25,000 km) per hour. At the gun range, the team:

… launched projectiles in the presence of sugar, a complex organic compound that mimics the organics in comet material. The heat of an impact burns the sugar up, releasing carbon. Projectiles were fired into a material that mimics lunar basalt, the rock that makes up the dark patches on the nearside of the moon.

They fired toward a material like that on the moon’s surface, in order to see if they could make a dark material turn darker. And they did accomplish that. The experiments showed that tiny carbon particles did become deeply embedded in the target material. The process reduced the amount of light reflected by the target material to less than 5 percent – about the same as the darkest parts of Mercury.

Read more about this study from Brown University.

Bottom line: Scientists say that comets passing near the sun are painting the surface of the innermost planet Mercury black.