Paintballs could be used to deflect asteroid from collision course

An MIT grad student says that paintballs could deflect an asteroid away from a collision course with Earth. But the process would take time.

Ever played paintballs? Me, neither, but I hear it’s a fun game in which participants use air guns to shoot capsules of paint at each other. Sung Wook Paek must have played. He’s a graduate student in MIT’s Department of Aeronautics and Astronautics who says that – if timed just right, and given enough time – pellets full of paint powder, launched in two rounds from a spacecraft, could deflect a killer asteroid away from a collision course with Earth. The only catch: this asteroid-deflecting technique would take about 20 years to work.

The idea is that the paintballs themselves would, first, knock the asteroid slightly off course. Plus white paint would cover the front and back of an asteroid, more than doubling its reflectivity, or albedo. At that point, the sun’s radiation would act on the asteroid in a different way than before, moving the asteroid further off course so that it would slip past Earth with no harm done. 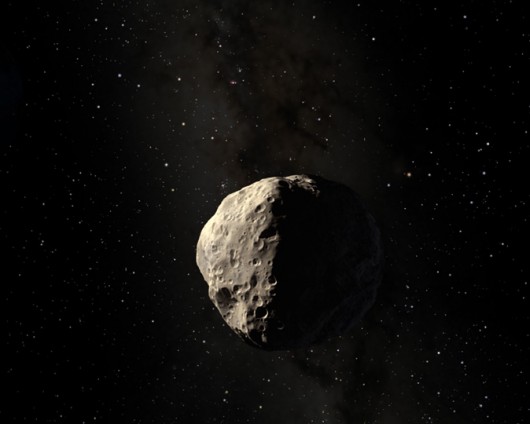 Artist’s concept of asteroid Apophis, which will sweep near Earth several times in the coming century. Image via MIT.

Of course, Paek used the infamous asteroid Apophis – due to sweep closely past Earth, but not collide, in early 2013 – a theoretical test case. Apophis will pass close to Earth in 2029, and then again in 2036.

Paek determined that five tons of paint would be needed to cover Apophis, which has a diameter of 1,480 feet (451 meters). MIT says:

He used the asteroid’s period of rotation to determine the timing of pellets, launching a first round to cover the front of the asteroid, and firing a second round once the asteroid’s backside is exposed. As the pellets hit the asteroid’s surface, they would burst apart, splattering the space rock with a fine, five-micrometer-layer of paint.

From his calculations, Paek estimates that it would take up to 20 years for the cumulative effect of solar radiation pressure to successfully pull the asteroid off its Earthbound trajectory. He says launching pellets with traditional rockets may not be an ideal option, as the violent takeoff may rupture the payload. Instead, he envisions paintballs may be made in space, in ports such as the International Space Station, where a spacecraft could then pick up a couple of rounds of pellets to deliver to the asteroid. 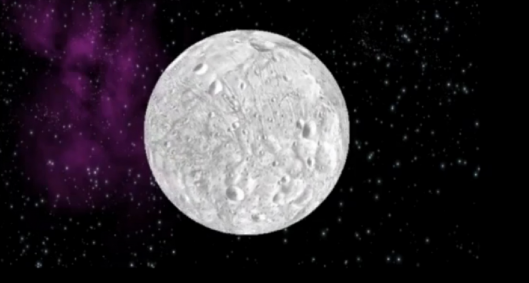 Bottom line: MIT grad student Sung Wook Paek suggests that paintballs fired at an asteroid from a nearby spacecraft could deflect the asteroid from a collision course with Earth. But the technique would need about 20 years to work. Paek’s paper detailing the paintball strategy won the 2012 Move an Asteroid Technical Paper Competition, sponsored by the United Nations’ Space Generation Advisory Council.

Will Asteroid Apophis strike Earth in 2036?