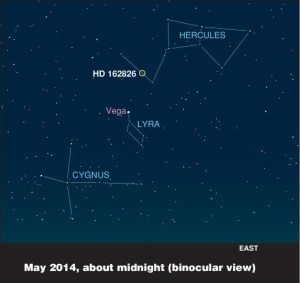 The star HD 162826 is probably a “solar sibling,” that is, a star born in the same star cluster as the Sun. It was identified by University of Texas at Austin astronomer Ivan Ramirez, in the process of honing a technique to find more solar siblings in the future, and eventually to determine how and where in the Milky Way galaxy the Sun formed.

HD 162826 is not visible to the unaided eye, but can be seen with low-power binoculars. It is 110 light-years away in the constellation Hercules, and appears not far from the bright star Vega in the night sky.

Thank you! Your submission has been received!
Oops! Something went wrong while submitting the form.
END_OF_DOCUMENT_TOKEN_TO_BE_REPLACED