Oumuamua’s path in our solar system

You’ve probably read about this unprecedented visitor from interstellar space. Astronomer Guy Ottewell thought you’d like to see its trajectory through our solar system.

Editor’s Note: One of the most exciting discoveries of 2017 was that of Oumuamua – the first known interstellar asteroid – which must have traveled through space for millions of years before its chance encounter with our star system. This chart and explanation of Oumuamua’s path through our solar system originally appeared at Guy Ottewell’s blog. Used here with permission.

This diagram shows the paths of the four inner planets in October, November, and December of 2017. The path of Oumuamua is shown from August onward. Its path is drawn in magenta before its October 19, 2017 discovery, and then in yellow. Stalks connect it to the ecliptic plane, that is the Earth-sun plane, at the beginning of each month.

Oumuamua arrived from the north, at an angle of about 33° (its inclination of 123°, or 90°+33°, means that the direction is retrograde, or opposite to the general motion of the planets). As with all travelers on huge orbits, like long-period comets, only the innermost, shortest, speediest part of the orbit is on the other side of the plane.

It was nearest to Earth (0.276 a.u.) on October 8. A green line connects it to Earth at the nearest moment, which was some days before the discovery.

The view is from 15° north of the ecliptic plane, from a longitude of 350°, and from a distance of 6 astronomical units (sun-Earth distances). The planets are exaggerated 500 times in size, the Sun 5 times. The dashed line shows the vernal equinox direction (the zero point for sky mapping). 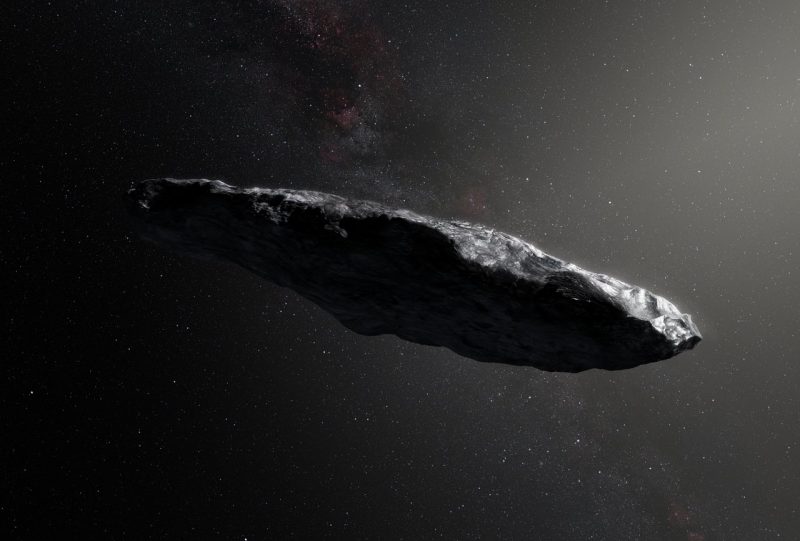 Artist’s concept of the 1st interstellar asteroid, which has been named Oumuamua. Data analysis reveals that is is a dark red highly-elongated metallic or rocky object, about 1,000 feet (400 meters) long, unlike anything normally found in our solar system. Image via ESO/ M. Kornmesser.

Bottom line: That’s enough for now. It was easier than I expected to find orbital elements, and make them work for this graphical representation of Oumuamua’s trajectory through our solar system, but I’ve spent more than half the day (the day before Christmas).