New research suggests that the 1st confirmed interstellar asteroid – called ‘Oumuamua by astronomers – likely came from a system where 2 stars orbit each other. 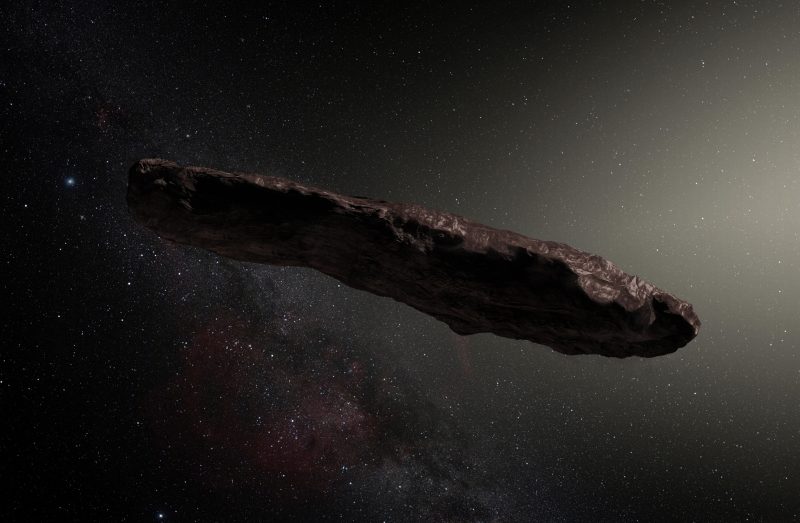 View larger. | Artist’s concept of ‘Oumuamua. On its brief sweep through our solar system in the autumn of 2017, astronomers learned that this object is dark red and elongated – that it’s tumbling chaotically – and that it’s not coming back. Image via ESO/M. Kornmesser/RAS.

The Royal Astronomical Society in the U.K. announced on March 19, 2018 that the object called 1I/2017 (`Oumuamua) – the first confirmed asteroid known to have journeyed here from outside our solar system – may have come from from a binary star system, or two stars orbiting a common center of gravity. Alan Jackson of the Centre for Planetary Sciences at the University of Toronto Scarborough in Ontario, Canada, and his colleagues studied how efficient binary star systems are at ejecting objects. They looked at how common these star systems are in the galaxy. They concluded that rocky objects like ‘Oumuamua are far more likely to come from binary than single star systems. They were also able to determine that rocky objects are ejected from binary systems in comparable numbers to icy objects (like comets).

The new study is published in the peer-reviewed journal Monthly Notices of the Royal Astronomical Society. Jackson said in a statement:

It’s remarkable that we’ve now seen for the first time a physical object from outside our solar system.

It’s really odd that [this] object … would be an asteroid, because a comet would be a lot easier to spot, and the solar system ejects many more comets than asteroids.

Based on their research, these astronomers also concluded that ‘Oumuamua – whose name means scout in Hawaiian – probably came from a system with a relatively hot, high-mass star since, they said:

… such a system would have a greater number of rocky objects closer in.

The team suggests that the asteroid was very likely to have been ejected from its binary system sometime during the formation of that system’s planets. 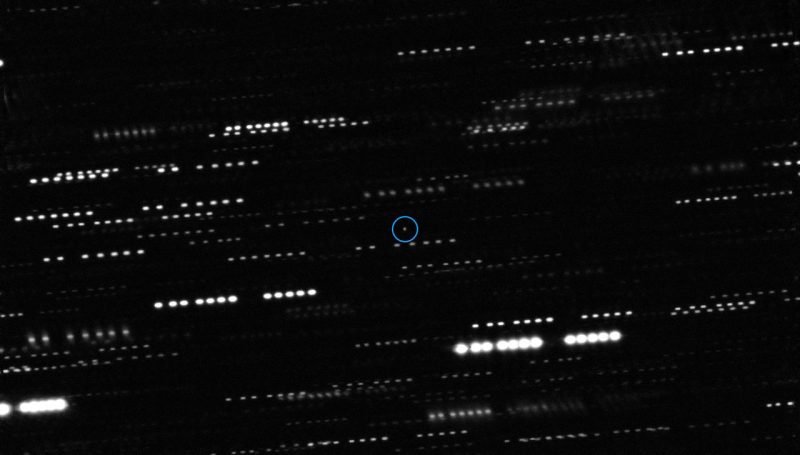 Many people comment on stories like this one that they don’t want to see artist’s concepts; they want to see the real thing. Here you go. This deep combined image shows the interstellar asteroid `Oumuamua at the center of the picture. It is surrounded by the trails of faint stars that are smeared as the telescopes tracked the moving asteroid. This image was created by combining multiple images from ESO’s Very Large Telescope as well as the Gemini South Telescope. The object is marked with a blue circle and appears to be a point source, with no surrounding dust. Image via ESO/K. Meech et al.

When it was first discovered researchers initially assumed the object was a comet, one of countless icy objects that release gas when they warm up on approaching the sun. But it didn’t show any comet-like activity as it neared the sun, and was quickly reclassified as an asteroid, meaning it was rocky.

Researchers were also fairly sure it was from outside our solar system, based on its trajectory and speed. An eccentricity of 1.2 — which classifies its path as an open-ended hyperbolic orbit — and such a high speed meant it was not bound by the gravity of the sun.

Jackson pointed out that:

‘Oumuamua’s orbit has the highest eccentricity ever observed in an object passing through our solar system.

In other words, from the start, astronomers knew was a strange object! But this object from another star system wasn’t entirely unexpected. In fact, astronomers had expected to see interstellar asteroids before this. It might be that ‘Oumuamua will be the first of many to come. That would be good, from the standpoint of astronomers because, they said:

… major questions about ‘Oumuamua remain. For planetary scientists like Jackson, being able to observe objects like these may yield important clues about how planet formation works in other star systems.

So farewell, ‘Oumuamua, and we hope to see more like you soon. In the meantime, check out the excellent animation below, which shows ‘Oumuamua’s path through our solar system, over the few months last fall during which it was visiting us.

Bottom line: New research suggests that the 1st confirmed interstellar asteroid – called ‘Oumuamua by astronomers – likely came from a system where 2 stars orbit each other.

Source: Ejection of rocky and icy material from binary star systems: Implications for the origin and composition of 1I/‘Oumuamua