NASA’s OSIRIS-REx mission arrived at asteroid Bennu on December 3 and has already made a significant discovery about this small world. 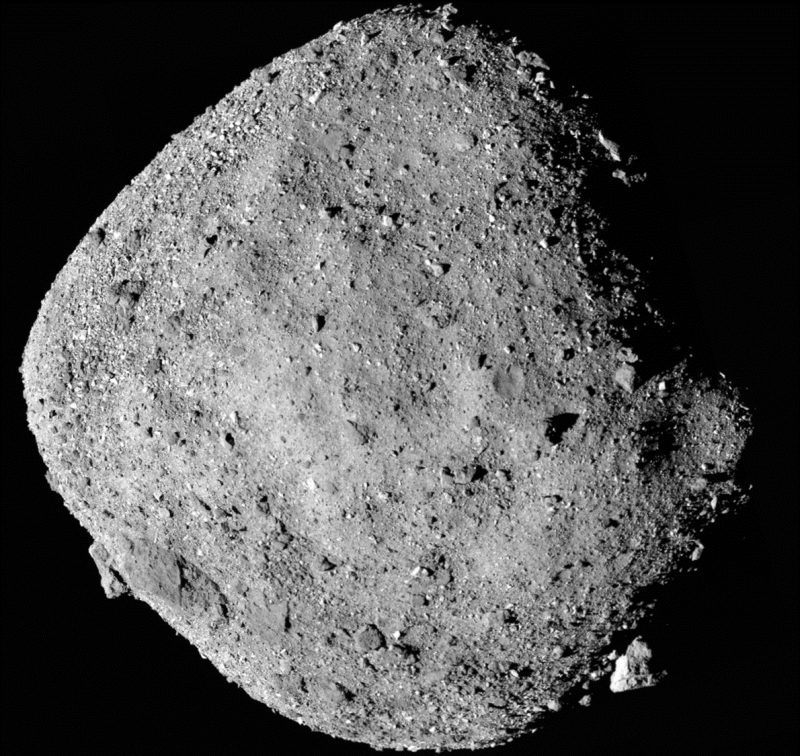 The OSIRIS-REx spacecraft was only 15 miles (24 km) from asteroid Bennu – on December 2, 2018 – when it captured the 12 high-resolution images that make up this mosaic. The mosaic shows features as small as 20 feet (6 meters). Image via NASA/Goddard/University of Arizona.

NASA’s OSIRIS-REx spacecraft arrived at asteroid Bennu on December 3, 2018. One week later – on December 10 – NASA announced the craft has already made a significant discovery. It has found hydrated minerals on Bennu’s surface – that is, evidence for previous (ancient) water on the rocky little world.

Just to clarify, this discovery doesn’t mean Bennu has liquid water – either inside or on its surface – right now. Instead, it shows that Bennu’s parent body, probably a much larger asteroid that Bennu broke off of a long time ago, did have water.

The Origins, Spectral Interpretation, Resource Identification, Security-Regolith Explorer – OSIRIS-REx – spacecraft reached Bennu on December 3 after traveling 1.4 million miles (2.2 million km) during the approach phase of the mission, from mid-August to early December. As of now, the spacecraft is only 12 miles (19 km) away from Bennu! As would be expected, this means that OSIRIS-REx has been sending back some stunning close-up images of this little world, which was first discovered in 1999. During the next preliminary survey of the asteroid, the spacecraft will pass over Bennu’s north pole, equator and south pole as close as 4.4 miles (7 km) to the surface.

OSIRIS-REx is also NASA’s first asteroid sample-return mission, which will collect samples of the surface regolith and bring them back to Earth for further study.

The mission team is elated at what has been seen and discovered so far, said Humberto Campins, a University of Central Florida planetary scientist, professor of physics and member of the OSIRIS-REx Science Team:

We’re very excited. The images are spectacular and spot on, what we expected thanks to predictions made with the instrumentation at the Arecibo Observatory in the late 90s and early 2000s. We will spend a year and a half mapping Bennu and have to wait until mid 2020 to collect the sample, but it is pretty amazing to actually see it now. Christmas came early.

So what about the water? The data comes from two spectrometers, the OSIRIS-REx Visible and Infrared Spectrometer (OVIRS) and the OSIRIS-REx Thermal Emission Spectrometer (OTES), which revealed the presence of the hydrated minerals – molecules that contain oxygen and hydrogen atoms bonded together, known as “hydroxyl groups” – that exist globally across the asteroid in water-bearing clay minerals. This means that Bennu’s rocky material once interacted with water, millions or billions of years ago. Bennu itself is too small to have ever hosted liquid water, so where did the water come from? Scientists think that the liquid water was present on Bennu’s parent body, a much larger asteroid that Bennu broke off of. Perhaps something like the dwarf planet Ceres – the largest asteroid in the main asteroid belt – which also shows evidence of liquid water in the past. As explained by Amy Simon, OVIRS deputy instrument scientist at NASA’s Goddard Space Flight Center in Greenbelt, Maryland:

The presence of hydrated minerals across the asteroid confirms that Bennu, a remnant from early in the formation of the solar system, is an excellent specimen for the OSIRIS-REx mission to study the composition of primitive volatiles and organics. When samples of this material are returned by the mission to Earth in 2023, scientists will receive a treasure trove of new information about the history and evolution of our solar system.

Bennu itself is very interesting appearance-wise, looking kind of like a rough diamond. Data obtained from the OSIRIS-REx Camera Suite (OCAMS) corroborated ground-based telescopic observations of Bennu, confirming the original model developed in 2013 by OSIRIS-REx Science Team Chief Michael Nolan and his colleagues. That model suggested just such a shape for the asteroid, which turned out to be pretty much correct, along with the diameter, rotation rate and inclination.

According to Anne Virkki, a research scientist at Arecibo Observatory in Puerto Rico:

The amazing Bennu images coming out now look strikingly similar to the shape model derived from Arecibo radar data in 2013. 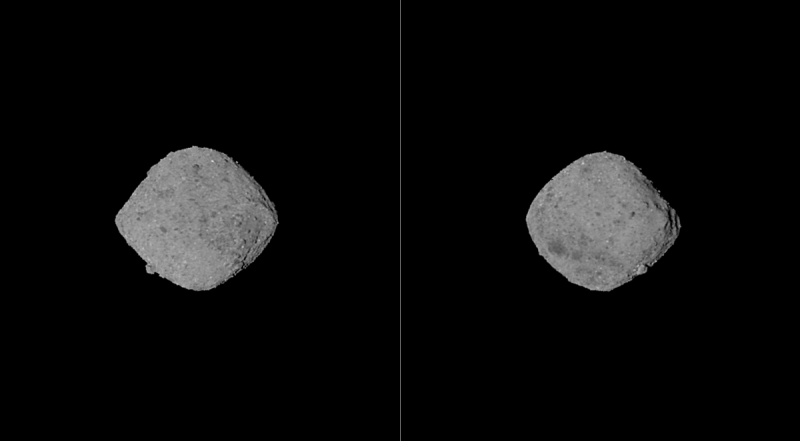 Two additional views of Bennu from OSIRIS-REx. Image via NASA/Goddard/University of Arizona.

Arecibo played a big role in the planning of the mission, said Campins:

The information obtained from radar characterization of this asteroid at Arecibo was critical in mission target selection and supported OSIRIS-REx science definition and mission planning. Arecibo’s radar data gave us two main advantages. It minimized the uncertainty in the shape of the asteroid and its orbit, which help reduce risk and increase the likelihood of a successful mission.

Nolan also commented on this:

Radar observations don’t give us any information about colors or brightness of the object, so it is really interesting to see the asteroid up close through the eyes of OSIRIS-REx. As we are getting more details, we are figuring out where the craters and boulders are, and we were very pleasantly surprised that virtually every little bump we saw in our radar image back then is actually really there.

Bennu’s surface overall is very rocky, with a mix of boulder-filled regions and a few smoother regions that lack boulders. There are actually more boulders than had been expected however. One boulder in particular near the south pole stands out – literally – at about 164 feet (50 meters) in height and 180 feet (55 meters) wide.

The mission is going well so far, as noted by Dante Lauretta, OSIRIS-REx principal investigator at the University of Arizona, Tucson:

Our initial data show that the team picked the right asteroid as the target of the OSIRIS-REx mission. We have not discovered any insurmountable issues at Bennu so far. The spacecraft is healthy and the science instruments are working better than required. It is time now for our adventure to begin. 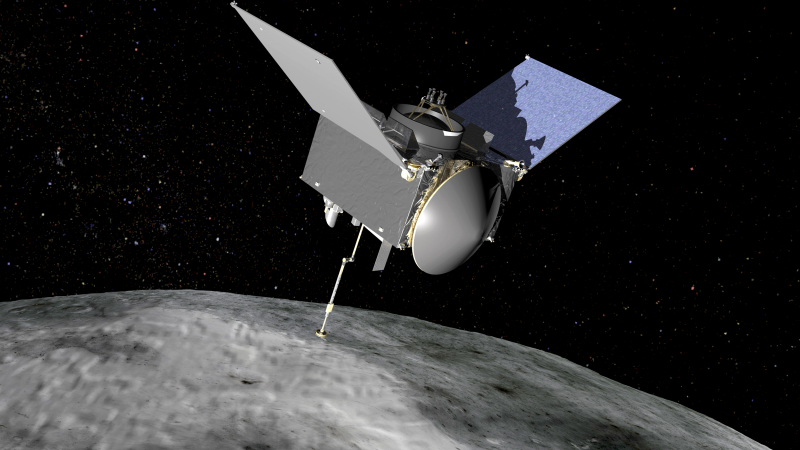 OSIRIS-REx is currently conducting a preliminary survey of the asteroid, flying over Bennu’s north pole, equator and south pole as close as 4.4 miles (7 km). This will help scientists determine Bennu’s mass – important information needed for the spacecraft’s insertion into orbit, since mass affects the asteroid’s gravitational pull on the spacecraft – as well as the asteroid’s internal structure and composition. The OSIRIS-REx Laser Altimeter (OLA), an instrument contributed by the Canadian Space Agency, will also now be able to make its first observations.

OSIRIS-REx is scheduled to enter orbit around Bennu on December 31, 2018, and it will remain in orbit until mid-February 2019. After that, it will leave orbit in order to initiate another series of flybys for the next survey phase.

During its first orbital phase, the spacecraft will pass very close to the asteroid, from a range of 0.9 miles (1.4 km) to 1.24 miles (2.0 km) from the center of Bennu. This will set a new record for both the smallest body ever orbited by a spacecraft and the closest orbit of a planetary body by a spacecraft – a remarkable achievement.

More information about OSIRIS-REx is available on the mission website.

Bottom line: The study of Bennu has just begun, but there are already significant discoveries being made, among them evidence for previous (ancient) water. It’s a world never explored before – until now – but scientists will be learning much about its origin and evolution – and asteroids in general – over the months and years ahead.