We are galaxy stuff

A new study – based on supercomputer simulations – reveals that each one of us may be made in part from matter that passes from one galaxy to another. 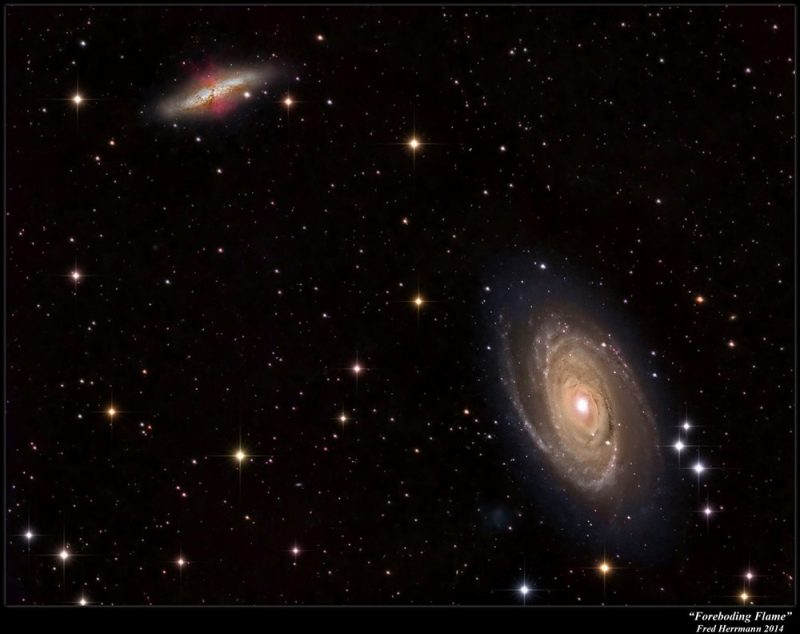 This image shows M81 (bottom right) and M82 (upper left), a pair of nearby galaxies where intergalactic transfer – transfer of materials between galaxies – might be happening. Image via Fred Herrmann.

Sagan famously said that we are made of star stuff. He meant the carbon, nitrogen and oxygen atoms in our bodies, as well as atoms of all other heavy elements, were created inside stars. Yet Sagan’s expression of this idea, which quickly became a cornerstone of popular culture, might not take the concept far enough. According to astrophysicists at Northwestern University, our origins are much less local than previously thought. In fact, according to their analysis – which they say is the first of its kind – we’re not just star stuff. We’re galaxy stuff.

This study is being published on July 26, 2017 (July 27 in the U.K.) by the peer-reviewed journal Monthly Notices of the Royal Astronomical Society.

The Northwestern researchers found that up to half of the matter in our Milky Way galaxy may come from distant galaxies. As a result, each one of us may be made in part from extragalactic matter. That is, atoms of carbon, nitrogen, oxygen and so on in our bodies may be created not just by stars in our own Milky Way galaxy, but by stars in far-flung galaxies.

They arrived at this conclusion using supercomputer simulations. The study required the equivalent of several million hours of continuous computing.

The simulations show that supernova explosions eject great quantities of gas from galaxies, which causes the atoms made inside stars to be transported from one galaxy to another via powerful galactic winds. According to their statement, intergalactic transfer is a newly identified phenomenon, which, they say, requires supercomputer simulations in order to be understood. According to these astrophysicists, this understanding is critical for knowing how galaxies evolve … and hence for knowing our own place in the universe.

Animation of gas flows around a Milky Way-like galaxy, as seen by the team’s computer simulations.

Daniel Anglés-Alcázar is a postdoctoral fellow in Northwestern’s Center for Interdisciplinary Exploration and Research in Astrophysics (CIERA). He led the study, and he said:

It is likely that much of the Milky Way’s matter was in other galaxies before it was kicked out by a powerful wind, traveled across intergalactic space and eventually found its new home in the Milky Way.

Given how much of the matter out of which we formed may have come from other galaxies, we could consider ourselves space travelers or extragalactic immigrants.

Space is vast. Galaxies are located at almost inconceivable distances from each other. So, Alcázar and his team said, even though galactic winds propagate at several hundred kilometers per second, the process of intergalactic transfer occurs over billions of years.

As always, this new research built on earlier studies. Northwestern’s Claude-André Faucher-Giguère and his research group, along with a unique collaboration called Feedback In Realistic Environments (FIRE), had developed numerical simulations that produced realistic 3-D models of galaxies. These simulations followed a galaxy’s formation from just after the Big Bang to the present day.

Anglés-Alcázar then developed state-of-the-art algorithms to mine this wealth of data. In this way, he and his team were able to quantify how galaxies acquire matter from the universe.

The scientists say the prediction of intergalactic transfer can now be tested. The Northwestern team plans to collaborate with observational astronomers who are working with the Hubble Space Telescope and ground-based observatories to test the simulation predictions.

Simulated examples of intergalactic winds, shown as green string, in action around galaxies, shown as clusters of yellow dots. The galaxy at the center is ejecting the winds, blowing them toward potential the other galaxies.

Bottom line: Supercomputer simulations suggest that each one of us may be made in part from extragalactic matter. Hence, we are galaxy stuff.