Astronomers found a high energy neutrino – a cosmic ray – that apparently originated during a “tidal disruption event,” that is, when a supermassive black hole shredded a distant star. 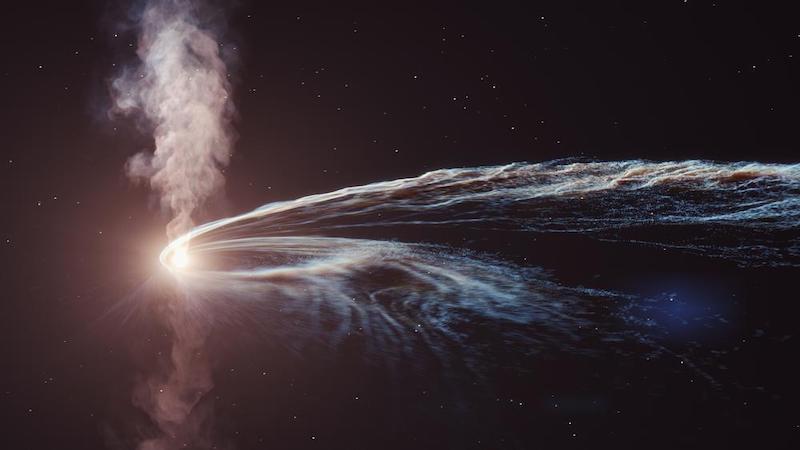 Artist’s concept of a tidal disruption event, when a star comes too close to a supermassive black hole and gets shredded. A situation like this may light up the host galaxy many times greater than its normal brightness. Image via DESY/ Science Communication Lab.

Cosmic rays are high-energy particles that travel through space at close to the speed of light. Many origins of cosmic rays have been suggested, and some confirmed; for example, supernova explosions generate them. But supernovae can’t explain the quantity of cosmic rays bombarding Earth at all times, and so cosmic ray origins are still largely mysterious. In particular, high-energy neutrinos are largely unexplained (although some come from blazars). Now, astronomers have pinpointed the origin of a high-energy neutrino, linking it to a cataclysmic event in which a star got too close to a supermassive black hole and was shredded.

This result was published in the peer-reviewed journal Nature Astronomy on February 22, 2021.

When a star passes by too close to a supermassive black hole – the kind that is believed to lurk in the center of most galaxies, including our Milky Way – the black hole shreds the star, rips it apart, in an event so violent that it makes the center of the galaxy glow many times brighter than it normally does, for several years. During this tidal disruption event, the star goes through a process of stretching, called spaghettification. Tidal disruption events are not well understood yet either, and the new research helps shed light on it.

The team, led by scientist Robert Stein, traced the neutrino back to what they think could be a gigantic natural particle accelerator. He explained:

This is the first neutrino linked to a tidal disruption event, and it brings us valuable evidence. Tidal disruption events are not well understood. The detection of the neutrino points to the existence of a central, powerful engine near the accretion disc, spewing out fast particles. And the combined analysis of data from radio, optical and ultraviolet telescopes gives us additional evidence that the [tidal disruption event] acts as a gigantic particle accelerator.

Neutrinos are practically mass-less subatomic particles sometimes created in particle accelerators on Earth, like the Large Hadron Collider at CERN. Cosmic ray neutrinos are, however, up to 1,000 times more energetic than a manufactured one.

This particular neutrino is 10 times as energetic as an earthly one and originated in a distant galaxy around 690 million light-years away, in the direction of our constellation Delphinus the Dolphin. The galaxy is known under the arguably unpoetic name 2MASX J20570298+1412165. When the the tidal disruption event (which by the way has a name too: AT2019dsg) was discovered in April 2019, astronomers started observing it intently with a number of telescopes in optical, ultraviolet, X-ray and radio wavelengths, covering a large portion of the electromagnetic spectrum.

Surprisingly, the detection of the cosmic ray neutrino did not take place until five months after the tidal disruption event was at its strongest. The IceCube Neutrino Observatory at the Amundsen-Scott South Pole Station in Antarctica made the detection (neutrinos can only be detected by specialized neutrino observatories) and backtracked its path to a location on the sky that conspicuously included AT2019dsg, the tidal disruption event. There is only 0.2% chance that the neutrino does not come from the event. The timing of the detection creates even more questions though: when and in what process are the neutrinos produced? 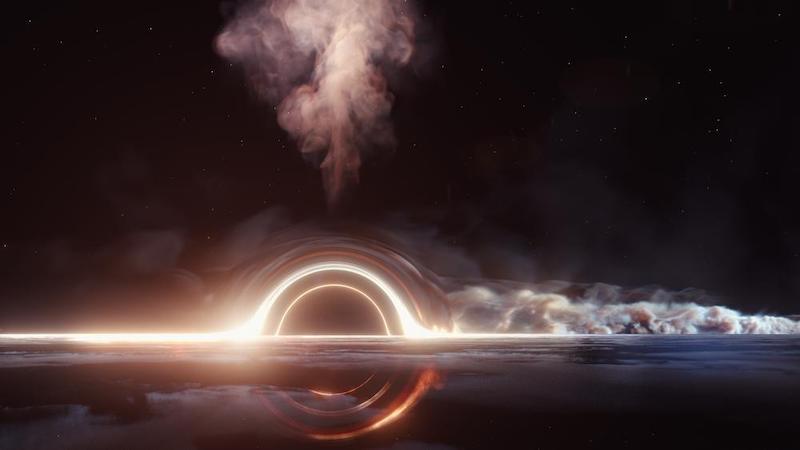 Sjoert van Velzen, an assistant professor at Leiden University in the Netherlands and one of the co-authors of the paper, said:

We predicted that neutrinos and tidal disruptions could be related, and seeing that for the first time in the data is just very exciting. This is another example of the power of multi-messenger astronomy, using a combination of light, particles, and space-time ripples to learn more about the cosmos. When I was a graduate student, it was often predicted this new era of astronomy was coming, but now to actually be part of it is very rewarding.

NASA produced an informative video around this event and their SWIFT telescope‘s participation in the observations:

Bottom line: A cosmic ray, specifically a high-energy neutrino, was tracked down by astronomers to its origin: a cataclysmic tidal disruption event, where a star is shredded to pieces by a super-massive black hole at the center of a galaxy.

Source: A tidal disruption event coincident with a high-energy neutrino