One in five stars has Earth-sized planet in habitable zone

“What this means is, when you look up at the thousands of stars in the night sky, the nearest sun-like star with an Earth-size planet in its habitable zone is probably only 12 light years away and can be seen with the naked eye.” – Erik Petigura

Scientists from University of California, Berkeley, and University of Hawaii, Manoa, have statistically determined that twenty percent of Sun-like stars in our galaxy have Earth-sized planets that could host life. The findings, gleaned from data collected from NASA’s Kepler spacecraft and the W. M. Keck Observatory, now satisfy Kepler’s primary mission: to determine how many of the 100 billion stars in our galaxy have potentially habitable planets. The results are being published November 4 in the journal Proceedings of the National Academy of Sciences. 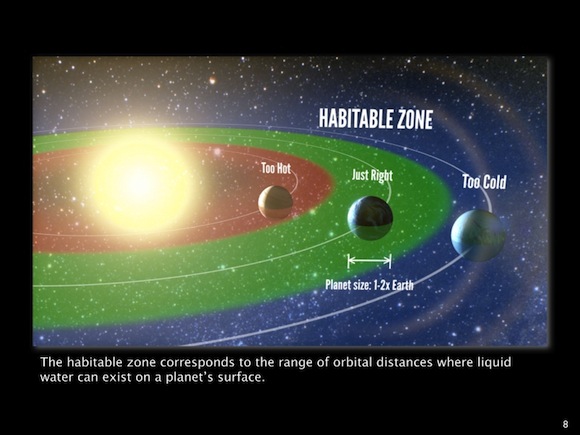 Artist’s representation of the “habitable zone,” the range of orbits where liquid water is permitted on the surface of a planet. CREDIT: PETIGURA/UC BERKELEY, HOWARD/UH-MANOA, MARCY/UC BERKELEY

“What this means is, when you look up at the thousands of stars in the night sky, the nearest sun-like star with an Earth-size planet in its habitable zone is probably only 12 light years away and can be seen with the naked eye. That is amazing,” said UC Berkeley graduate student Erik Petigura, who led the analysis of the Kepler and Keck Observatory data.

“For NASA, this number – that every fifth star has a planet somewhat like Earth – is really important, because successor missions to Kepler will try to take an actual picture of a planet, and the size of the telescope they have to build depends on how close the nearest Earth-size planets are,” said Andrew Howard, astronomer with the Institute for Astronomy at the University of Hawaii. “An abundance of planets orbiting nearby stars simplifies such follow-up missions.”

Earth-size may not mean habitable

The team, which also included planet hunter Geoffrey Marcy, UC Berkeley professor of astronomy, cautioned that Earth-size planets in Earth-size orbits are not necessarily hospitable to life, even if they orbit in the habitable zone of a star where the temperature is not too hot and not too cold.

“Some may have thick atmospheres, making it so hot at the surface that DNA-like molecules would not survive. Others may have rocky surfaces that could harbor liquid water suitable for living organisms,” Marcy said. “We don’t know what range of planet types and their environments are suitable for life.”

Just last week, Howard, Marcy and their colleagues provided hope that many such planets actually are rocky. They reported that one Earth-sized planet discovered – albeit, a planet with a likely temperature of 2,000 Kelvin, which is far too hot for life as we know it – is the same density as Earth and most likely composed of rock and iron, like Earth. 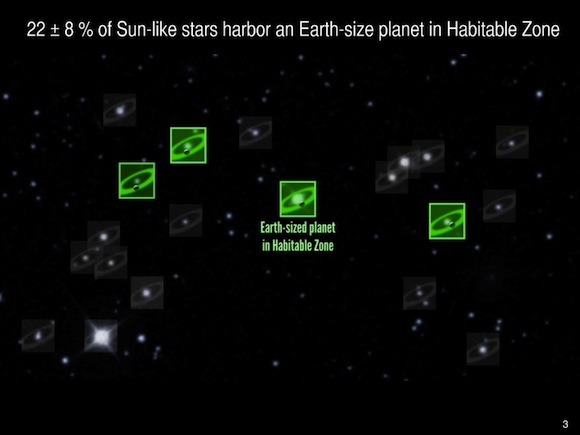 “This gives us some confidence that when we look out into the habitable zone, the planets Erik is describing may be Earth-size, rocky planets,” Howard said.

NASA launched the now crippled Kepler space telescope in 2009 to look for planets that cross in front of, or transit, their stars, which causes a slight diminution – about one hundredth of one percent – in the star’s brightness. From among the 150,000 stars photographed every 30 minutes for four years, NASA’s Kepler team reported more than 3,000 planet candidates. Many of these are much larger than Earth – ranging from large planets with thick atmospheres, like Neptune, to gas giants like Jupiter – or in orbits so close to their stars that they are roasted.

To sort them out, Petigura and his colleagues are using the twin, 10-meter telescopes of the Keck Observatory on the summit of Mauna Kea, Hawaii to obtain HIRES spectra of as many stars as possible. This will help them determine each star’s true brightness and calculate the diameter of each transiting planet, with an emphasis on Earth-diameter planets.

HIRES (the High-Resolution Echelle Spectrometer) produces spectra of single objects at very high spectral resolution, yet covering a wide wavelength range. It does this by separating the light into many “stripes” of spectra stacked across a mosaic of three large CCD detectors. HIRES is famous for finding planets orbiting other stars. Astronomers also use HIRES to study distant galaxies and quasars, finding clues to the Big Bang.

The team focused on the 42,000 stars that are like the sun or slightly cooler and smaller, and found 603 candidate planets orbiting them. Only 10 of these were Earth-size, that is, one to two times the diameter of Earth and orbiting their star at a distance where they are heated to lukewarm temperatures suitable for life. The team’s definition of habitable is that a planet receives between four times and one-quarter the amount of light that Earth receives from the sun.

A census of extrasolar planets

The analysis subjected Petigura’s planet-finding algorithms to a battery of tests in order to measure how many habitable zone, Earth-size planets they missed. Petigura actually introduced fake planets into the Kepler data in order to determine which ones his software could detect and which it couldn’t.

“What we’re doing is taking a census of extrasolar planets, but we can’t knock on every door. Only after injecting these fake planets and measuring how many we actually found, could we really pin down the number of real planets that we missed,” Petigura said.

Accounting for missed planets, as well as the fact that only a small fraction of planets are oriented so that they cross in front of their host star as seen from Earth, allowed them to estimate that 22 percent of all sun-like stars in the galaxy have Earth-size planets in their habitable zones.

“The primary goal of the Kepler mission was to answer the question, When you look up in the night sky, what fraction of the stars that you see have Earth-size planets at lukewarm temperatures so that water would not be frozen into ice or vaporized into steam, but remain a liquid, because liquid water is now understood to be the prerequisite for life,” Marcy said. “Until now, no one knew exactly how common potentially habitable planets were around Sun-like stars in the galaxy.”

All of the potentially habitable planets found in their survey are around K stars, which are cooler and slightly smaller than the sun, Petigura said. But the team’s analysis shows that the result for K stars can be extrapolated to G stars like the sun. Had Kepler survived for an extended mission, it would have obtained enough data to directly detect a handful of Earth-size planets in the habitable zones of G-type stars.

If the stars in the Kepler field are representative of stars in the solar neighborhood, then the nearest (Earth-size) planet is expected to orbit a star that is less than 12 light-years from Earth and can be seen by the unaided eye. Future instrumentation to image and take spectra of these Earths need only observe a few dozen nearby stars to detect a sample of Earth-size planets residing in the habitable zones of their host stars.

In January, the team reported a similar analysis of Kepler data for scorched planets that orbit close to their stars. The new, more complete analysis shows that “nature makes about as many planets in hospitable orbits as in close-in orbits,” Howard said.