Once a day, Io’s atmosphere collapses

Jupiter’s moon Io has active volcanos spewing gases into its thin atmosphere. As Io moves in and out of Jupiter’s shadow, its atmosphere collapses and then repairs itself. 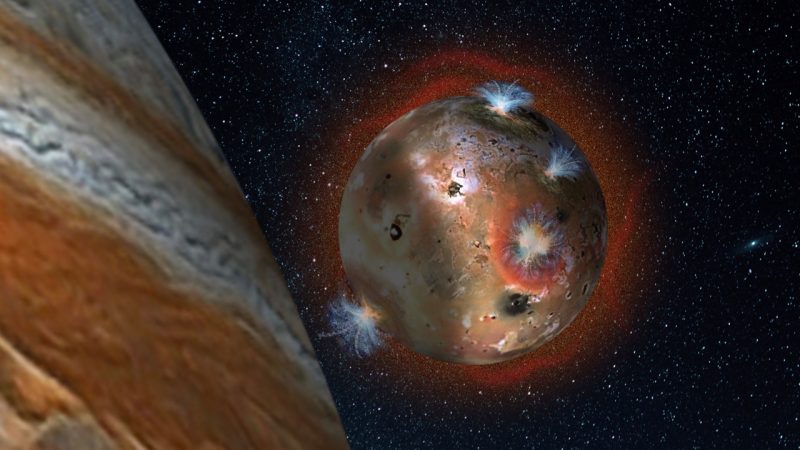 View larger. | Artist’s concept of umbrella-like plumes of sulfur dioxide gas, which extend up to 300 miles (500 km) above the surface of Jupiter’s moon Io, and which contribute to Io’s atmosphere. Notice Jupiter in the background, and notice Jupiter’s shadow on Io. Image via Southwest Research Institute.

Io is the innermost of the large moons of Jupiter. It has the most active volcanos in our solar system, and it has an extremely thin atmosphere consisting mainly of sulfur dioxide (or SO2, a volcanic gas). For part of each Io day, the little moon is eclipsed by Jupiter. That is, it’s in Jupiter’s shadow. Astronomers knew that, during the eclipses, temperatures on Io drop, and they knew Io’s atmosphere was variable as a result. This week (August 2, 2016), a team led by astronomers at Southwest Research Institute (SwRI) in San Antonio said they’ve now documented this variability, which, they say, is extreme. They said the atmosphere “collapses” during the eclipses and freezes onto the surface as ice, when Io is shaded by Jupiter.

Later, when Io moves out of eclipse and sunlight falls on its surface again, the surface ice warms. The atmosphere then reforms through sublimation, a process whereby ice converts directly to gas.

SwRI’s Constantine Tsang led the study, which is published in the Journal of Geophysical Research. He said:

This research is the first time scientists have observed this phenomenon directly, improving our understanding of this geologically active moon. 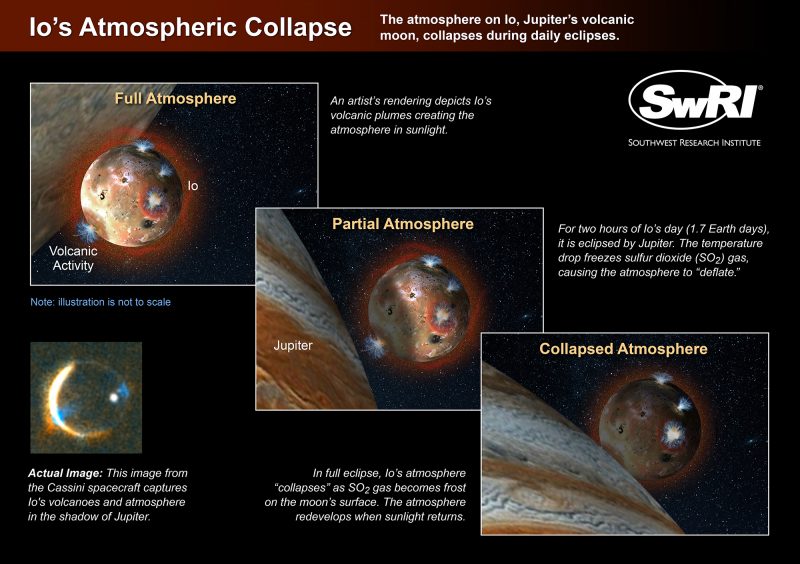 View larger. | Artist’s concept of the atmosphere on Io as it collapses during daily eclipses by Jupiter. Image via Southwest Research Institute.

The team used the eight-meter Gemini North telescope in Hawaii and the Texas Echelon Cross Echelle Spectrograph (TEXES) for this research. The astronomers’ statement explained:

Data showed that Io’s atmosphere begins to “deflate” when the temperatures drop from -235 degrees Fahrenheit in sunlight to -270 degrees Fahrenheit during eclipse. Eclipse occurs 2 hours of every Io day (1.7 Earth days). In full eclipse, the atmosphere effectively collapses as most of the SO2 gas settles as frost on the moon’s surface. The atmosphere redevelops as the surface warms once the moon returns to full sunlight.

John Spencer, an SwRI scientist who also participated in the study, said:

This confirms that Io’s atmosphere is in a constant state of collapse and repair, and shows that a large fraction of the atmosphere is supported by sublimation of SO2 ice.

Though Io’s hyperactive volcanoes are the ultimate source of the SO2, sunlight controls the atmospheric pressure on a daily basis by controlling the temperature of the ice on the surface.

We’ve long suspected this, but can finally watch it happen.

Prior to the study, no direct observations of Io’s atmosphere in eclipse had been possible because Io’s atmosphere is difficult to observe in the darkness of Jupiter’s shadow. These scientists credit their breakthrough to the TEXES instrument on the Gemini North telescope. It measures the atmosphere using heat radiation, not sunlight. Their statement explained:

Tsang and Spencer’s observations occurred over two nights in November 2013, when Io was more than 420 million miles (675 million km) from Earth. On both occasions, Io was observed moving in and out of Jupiter’s shadow, for a period about 40 minutes before and after eclipse.

Since July 4, a new advanced spacecraft has been orbiting Jupiter. NASA’s Juno spacecraft entered Jupiter orbit on July 4. The craft and its instruments are begin calibrated now, but the science phase of the mission is expected to begin in about a month. Then Io will become one of Juno’s many targets. 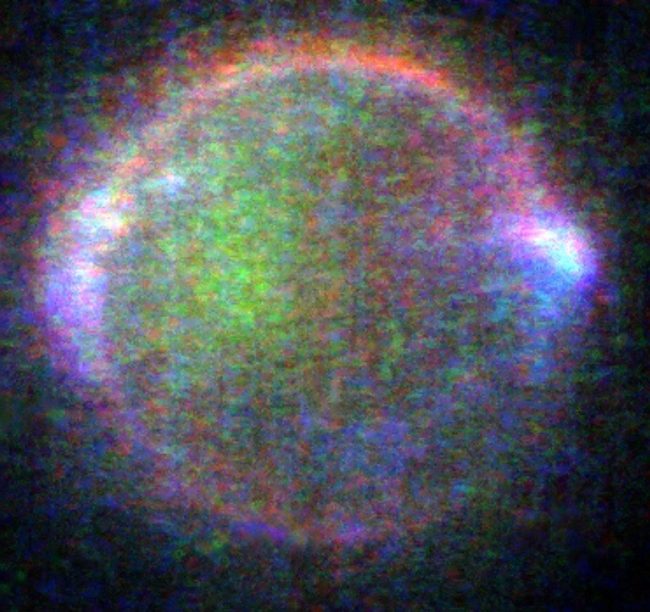 Here’s a Galileo spacecraft view of Io, acquired while the moon was in Jupiter’s shadow (in eclipse). The moon’s atmosphere can be seen as a ghostly glow at visible wavelengths (red, green, and violet). The vivid colors are caused by collisions between Io’s atmospheric gases and energetic charged particles trapped in Jupiter’s magnetic field. The green and red emissions are likely produced by mechanisms similar to those in Earth’s polar regions that produce the aurora, or northern and southern lights. Bright blue glows mark the sites of dense plumes of volcanic vapor. Image via NASA Photojournal.

Bottom line: Io is the most volcanically active world in our solar system. Its volcanos contribute to its atmosphere. For part of each orbit around Jupiter, Io is in Jupiter’s shadow. As these times, its atmosphere collapses and falls to the surface as ice. Later, when sunlight strikes the moon again, the atmosphere reforms.