An oddly textured region of southern Mars is not ice-covered today. Yet landforms here – and now certain minerals – are associated with under-ice volcanoes. 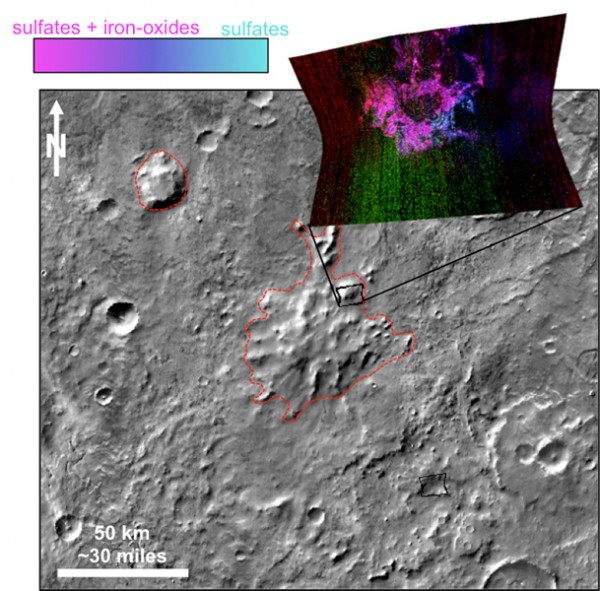 View larger. | This is the Sisyphi Montes region on Mars. Although the site is far from any ice sheet on modern Mars, its unusual landforms are associated with old volcanoes under ice. Now volcanic minerals have been found as well. Image via NASA/JPL-Caltech/JHUAPL/ASU

We know that Mars had extensive volcanism in the past; in fact, it has the largest extinct volcano known in our solar system. On May 3, 2016, NASA said that evidence is building for old volcanoes that erupted under Martian ice billions of years ago, in a region of southern Mars. The new evidence takes the form of characteristic minerals known to result from under-ice volcanoes. Those minerals have been found far from any ice sheet on the Red Planet today.

The evidence comes from NASA’s Mars Reconnaissance Orbiter, which launched from Earth in 2005. Sheridan Ackiss of Purdue University in Indiana led a team that used the orbiter’s mineral-mapping spectrometer to investigate the composition of surface rocks in what NASA called “an oddly textured region” of southern Mars called Sisyphi Montes.

For many years, scientist have known of flat-topped mesas in this region, known as known as tuyas. On Earth, in places where volcanoes are known to have erupted under glaciers, scientists see these free-standing flat-topped mountains.

And so, since the geology of the rocky worlds in our solar system – like Earth and Mars – are known to be so similar, scientists like Sheridan Ackiss study the possibility that volcanoes may have erupted under Martian ice once covering Sisyphi Montes. Ackiss explained:

Rocks tell stories. Studying the rocks can show how the volcano formed or how it was changed over time.

I wanted to learn what story the rocks on these volcanoes were telling.

The tuyas found in Sisyphi Montes are some 1,000 miles (about 1,600 km) from the current south polar ice cap of Mars (the ice cap on modern Mars has a diameter of about 220 miles, 350 km). Thus, among other things, the newly discovered volcanic minerals strengthen the case that ice on Mars was once more extensive than what we see today.

The NASA statement explained more about the minerals found:

When a volcano begins erupting beneath a sheet of ice on Earth, the rapidly generated steam typically leads to explosions that punch through the ice and propel ash high into the sky. For example, the 2010 eruption of ice-covered Eyjafjallajökull in Iceland lofted ash that disrupted air travel across Europe for about a week.

Characteristic minerals resulting from such subglacial volcanism on Earth include zeolites, sulfates and clays.

Bottom line: An oddly textured region of southern Mars called Sisyphi Montes – far from Mars’ southern ice cap today – has features associated with under-ice volcanoes on Earth. Recently, the Mars Reconnaissance Orbiter also found signs of minerals on the surface of this region that can also result from under-ice volcanoes.