One of the oldest stars in the universe

The star could be only a single generation removed from the Big Bang. It’s the new recorder-holder for having the fewest “metals,” that is, the fewest of the heavier elements made inside stars and released to space via supernovae. 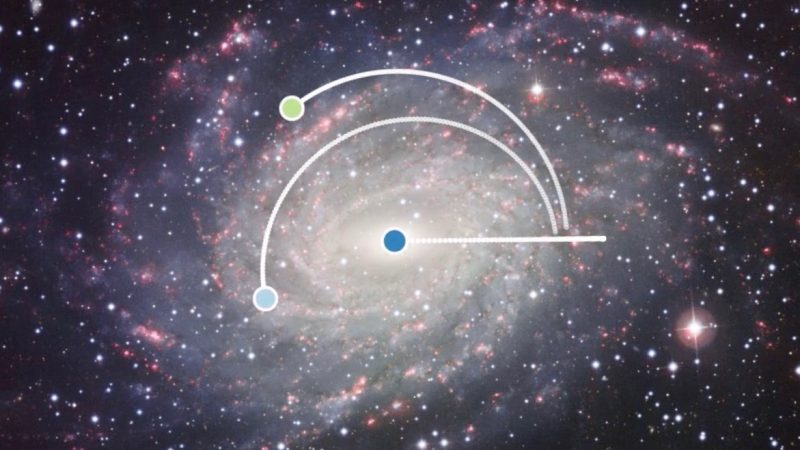 The newly discovered star system (shown in blue) orbits within our Milky Way galaxy, in an orbit not unlike that of our sun (shown in green). Image via Kevin Schlaufman/Johns Hopkins.

The first stars to form after the Big Bang would have been made entirely of elements made in the Big Bang itself: the lightest and simplest elements like hydrogen, helium and lithium. The heavier and more complex elements – which astronomers call metals – were made in subsequent stars’ thermonuclear furnaces. The first stars seeded the universe with the heavier elements when they exploded as supernovae. So when astronomers find a star with mostly light elements – and few heavier elements – they conclude it’s one of the universe’s very early stars. That’s the case with a star announced by Johns Hopkins University on November 5, 2018. This 13.5 billion-year-old star – a very tiny star in our own Milky Way galaxy – appears to be one of the oldest stars known and it’s also the new record-holder for stars with the fewest heavy elements known so far.

The Johns Hopkins astronomers said this star is made almost entirely – but still not exclusively – from materials spewed from the Big Bang. They said in a statement:

The discovery of this [star] means more stars with very low mass and very low metal content are likely out there – perhaps even the universe’s very first stars. The star is unusual because unlike other stars with very low metal content, it is part of the Milky Way’s ‘thin disk’ – the part of the galaxy in which the sun resides. And because this star is so old, researchers say it’s possible that our galactic neighborhood is at least 3 billion years older than previously thought.

And that is very interesting news! These findings have been accepted for publication in the peer-reviewed Astrophysical Journal.

The star carries the unwieldy label of 2MASS J18082002-5104378 B. The paper’s lead author is astronomer Kevin Schlaufman of Johns Hopkins. He said:

This star is maybe one in 10 million. It tells us something very important about the first generations of stars.

One interesting feature of the star is its orbit, which is unlike that of most metal-poor stars. Like our sun, the star never gets too far from the plane of the galaxy. In contrast, most ultra-metal-poor stars have orbits that take them across the galaxy and far from its plane.

This research is based on observations made using the Magellan Clay Telescope at Las Campanas Observatory in Chile and the Gemini Observatories in Chile and Hawaii. The astronomers said:

This star’s extremely low metallicity indicates that in a cosmic family tree, it could be as little as one generation removed from the Big Bang. Indeed, it is the new record holder for the star with the smallest complement of heavy elements – it has about the same heavy element content as the planet Mercury. In contrast, our sun is thousands of generations down that line and has a heavy element content equal to 14 Jupiters.

The star is part of a two-star system orbiting around a common point. The team found the tiny, almost invisibly faint ‘secondary’ star after another group of astronomers discovered the much brighter ‘primary’ star and measured its composition by studying a high-resolution optical spectrum of its light. The presence or absence of dark lines in a star’s spectrum can identify the elements it contains, such as carbon, oxygen, hydrogen, iron, and more. In this case, the star had extremely low metallicity. Those astronomers also identified unusual behavior in the star system that implied the presence of a neutron star or black hole. Schlaufman and his team found that to be incorrect, but in doing so they discovered the visible star’s much smaller companion.

The existence of the smaller companion star turned out to be the big discovery. Schlaufman’s team was able to infer its mass by studying the primary star’s slight ‘wobble’ as the little star’s gravity tugged at it.

It’s only been in the past couple of decades that astronomers have had hopes of finding the first stars, and oldest stars, in our universe. Prior to the late 1990s, they believed that only massive stars could have formed in the earliest stages of the universe — and they could never be observed because they burn through their fuel and explode quickly as supernovae.

As astronomical simulations became more sophisticated – that is, as we learned more about how nature works in the vast realm of the cosmos – it began to seem that in certain situations, a star from the very early universe with particularly low mass could still exist, even more than 13 billion years since the Big Bang. The astronomers’ statement explained:

Unlike huge stars, low-mass ones can live for exceedingly long times. Red dwarf stars, for instance, with a fraction of the mass of the sun, are thought to live to trillions of years.

The discovery of this new ultra-metal-poor star – 2MASS J18082002-5104378 B – opens up the possibility of observing even older stars. Schlaufman said:

If our inference is correct, then low-mass stars that have a composition exclusively the outcome of the Big Bang can exist. Even though we have not yet found an object like that in our galaxy, it can exist. 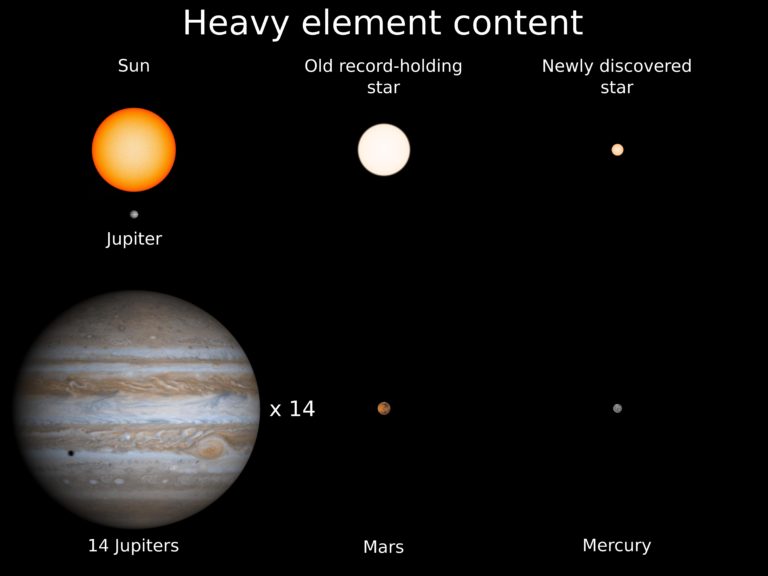 The newly discovered star is only 14 percent the size of our sun. It’s the new record holder for the star with the fewest heavy elements, indicating it formed early in the history of our cosmos, before the universe had a chance to be seeded with the heavy elements made inside stars and released in supernova explosions. Image via Kevin Schlaufman/Johns Hopkins.

Bottom line: A newly discovered star – labeled 2MASS J18082002-5104378 B – turns out to have the least amount of heavy elements or “metals” known in a star so far. That means it formed in the very early universe, not long after the Big Bang.

Source: An Ultra Metal-poor Star Near the Hydrogen-burning Limit