When large and small galaxies merge, the large galaxy’s central black hole typically gorges on gas and dust. But in a merging galaxy system called Was 49, the small galaxy has the feeding black hole. 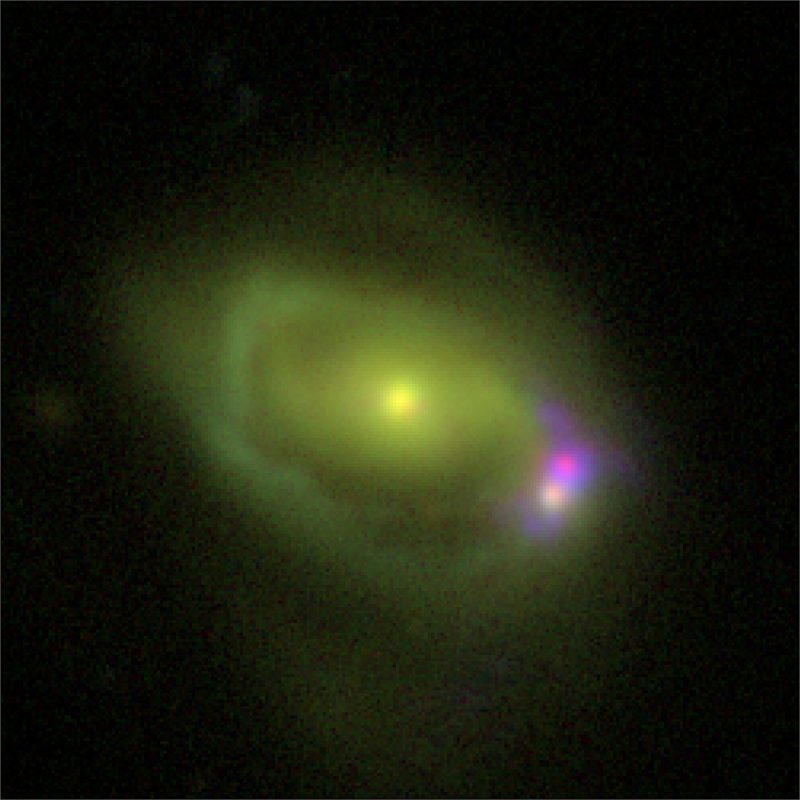 This optical image shows the Was 49 system, which consists of a large galaxy merging with a much smaller galaxy. The dwarf galaxy rotates within the larger galaxy’s disk, about 26,000 light-years from its center. The pink-colored region indicates a feeding supermassive black hole; the green color indicates normal starlight. Image via NASA/ DCT/ NRL.

One of the fascinating discoveries of modern astronomy has been that galaxies – entire islands of stars – sometimes merge with other galaxies. Another discovery has been that many galaxies like our Milky Way are known to contain supermassive black holes at their cores. Now a supermassive black hole inside one tiny galaxy is challenging what scientists have come to believe about galaxy mergers. The merging system is known as Was 49, and it consists of a large disk galaxy (Was 49a), merging with a much smaller dwarf galaxy (Was 49b).

Both of these galaxies have central supermassive black holes. Astronomers would have expected that, as the big and little galaxies merge, their gravitational interactions would create a twisting force – a torque – that would funnel gas into the larger galaxy’s black hole. As the black hole of the larger galaxy gobbled up gas and dust, they would have expected to see it spewing out high-energy X-rays (as matter is converted to energy).

But that’s not what they see in this system.

Instead, the smaller galaxy’s central black hole is the more active one, while the larger galaxy’s black hole is relatively quiet. Nathan Secrest, lead author of the study and postdoctoral fellow at the U.S. Naval Research Laboratory in Washington, said in a statement:

This is a completely unique system and runs contrary to what we understand of galaxy mergers.

Also, the black hole of the smaller galaxy is mysterious in and of itself. Its mass – the amount of matter it contains in its hidden interior – is huge, compared to similarly sized galaxies. Data on the smaller galaxy’s x-ray emissions came from NASA’s Nuclear Spectroscopic Telescope Array (NuSTAR) mission. Data from NuSTAR and the Sloan Digital Sky Survey suggest the black hole contains more than 2 percent of the galaxy’s own mass. Secrest said:

We didn’t think that dwarf galaxies hosted supermassive black holes this big. This black hole could be hundreds of times more massive than what we would expect for a galaxy of this size, depending on how the galaxy evolved in relation to other galaxies.

Scientists are trying to figure out why the supermassive black hole of dwarf galaxy Was 49b is so big. It may have already been large before the merger began, or it may have grown during the very early phase of the merger, they said. Secrest commented:

These astronomers also said that, in several hundred million years, the black holes of the large and small galaxies will merge into one.

Bottom line: When a large and small galaxy merge, astronomers expect the supermassive black hole at the center of the larger galaxy to be the one to feed on gas and dust and shine in high-energy x-rays. But in the merging galaxy system known as Was 49, the smaller galaxy – confoundingly – contains the feeding black hole.