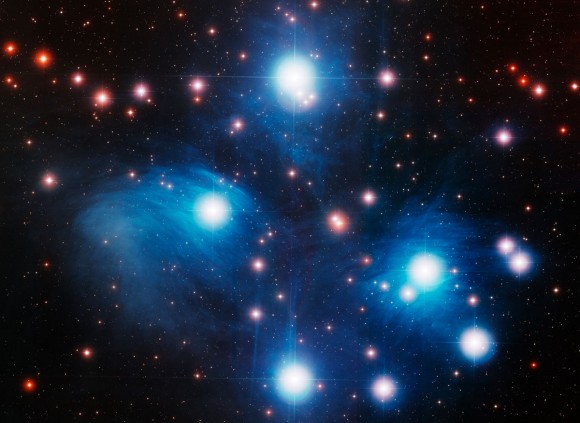 A telescopic view of the Pleiades, or Seven Sisters. The eye sees this cluster as a tiny, misty dipper of stars. It is one of the most beloved star clusters. Image via NOAO/AURA/NSF.

To find this distance, they used a tried-and-true distance measuring technique called stellar parallax. This technique works on the same principle you can see for yourself, by holding a finger in front of your nose and closing first one eye, then the other. If you do this, you’ll see your finger appear to shift against a more distant background.

Likewise, the NRAO astronomers observed a shift while looking at Pleiades’ stars, but the “telescope” used to observe these stars was, in this case, as wide as the whole Earth. In other words, the apparent shift in each star’s position was caused by Earth’s revolution around the sun. They observed the stars in front of the star background at opposite ends of the Earth’s orbit, over about a year and a half, using a global network of radio telescopes including the Very Long Baseline Array (VLBA), a system of 10 radio telescopes ranging from Hawaii to the Virgin Islands; the Robert C. Byrd Green Bank Telescope in West Virginia; the 1,000-foot-diameter William E. Gordon Telescope of the Arecibo Observatory in Puerto Rico; and the Effelsberg Radio Telescope in Germany.

They observed a slight shift of the Pleiades stars against the more distant background – and them applied some simple trigonometry – to obtain the new distance to the Pleiades of 443 light-years. 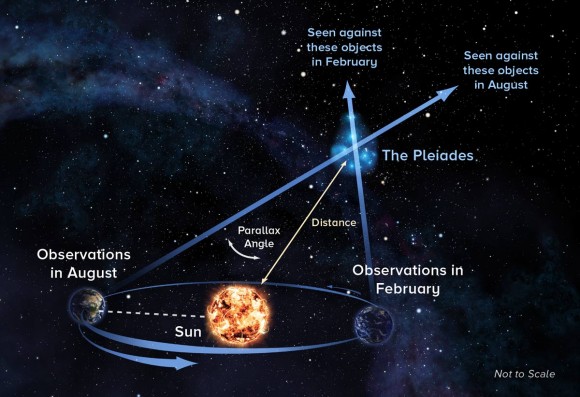 NRAO asronomers used a tried-and-true distance measurement technique to find the distance to the Pleiades. With parallax technique, astronomers observe objects at opposite ends of Earth’s orbit around the sun to measure its distance. Illustration via Alexandra Angelich, NRAO/AUI/NSF.

These astronomers say their work shows that an earlier measurement made by a cosmic-mapping research satellite was wrong. Their press release says:

Until the 1990s, the consensus was that the Pleiades are about 430 light-years from Earth. However, the European satellite Hipparcos, launched in 1989 to precisely measure the positions and distances of thousands of stars, produced a distance measurement of only about 390 light-years …

The question now is what happened to Hipparcos?

Over four years of operation, the spacecraft measured distances to 118,000 stars. The cause of its error in measuring the distance to the Pleiades is unknown.

Another spacecraft, Gaia, launched in December of 2013, will use similar technology to measure distances of about one billion stars.

Knowing the distant to the Pleiades star cluster is important to astronomers. This relatively nearby cluster contains hundreds of young, hot stars formed only about 100 million years ago, so it helps astronomers learn about how stars form and evolve. What’s more, astronomers have used the measured physical characteristics of Pleiades stars as a tool for estimating the distances to other, more distant clusters.