The brightness of this unusual nova has gone up and down and now back up again. EarthSky friend Tom Wildoner tells you how to see the nova before it’s gone! 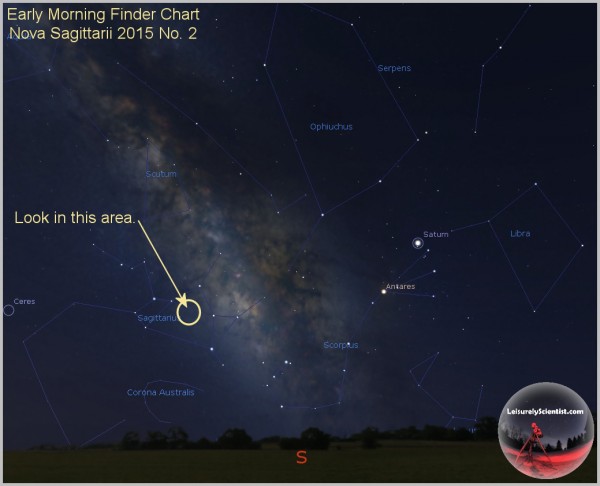 View larger. | Finder chart for Nova Sagittarii 2015 No. 2. This chart is for Tom Wildoner’s observing location in Pennsylvania, but the nova’s location with respect to these background stars will be the same from across the globe. Chart credit to Stellarium, via Tom Wildoner. Used with permission.

By Thomas Wildoner at LeisurelyScientist.com

I managed to get an early morning view of the new nova in the constellation Sagittarius this morning, March 29, 2015. According to recent observations, this unusual nova has had an unusual magnitude shift, up and down and now back up again. Grab a blanket and head out to see this bright nova before it is gone!

You can consult the chart above to find the nova’s location.

Sagittarius is low on the southern horizon from my viewing location, just above tree level, but I did manage to capture it this morning. The nova is the brightest object inside the yellow circle. I used a Canon 6D, Canon 100mm f/2.8L lens mounted on a tripod with no guiding. I placed some reference star magnitudes on the chart for you. 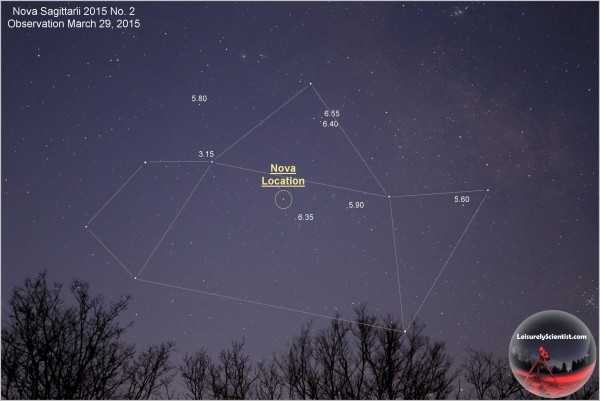 Based on my photographic observation this morning, I would estimate the magnitude to be approximately 5.6. This was estimated by comparing neighboring star brightness’s to the nova.

You can click HERE to view a list of recent observations by the American Association of Variable Star Observers.

If you get a photo of this new nova, please share it with us, we would love to see it! Please post it to the Leisurely Scientist Facebook page, you can email your image and details to tom @ leisurelyscientist.com or tweet it to @leisurelysci on Twitter.

We’re halfway through our annual fund-raising campaign. Have you donated yet? Help EarthSky keep going.