How the world came to understand black holes

Earlier this month, Roger Penrose, Reinhard Genzel, and Andrea Ghez split the 2020 physics Nobel Prize for decades of work on black holes. Click here to learn more about their monumental achievement and about the history of our understanding of these exotic objects in space.

Roger Penrose, Reinhard Genzel and Andrea Ghez. They are joint winners of 2020’s Nobel Prize in physics for their work on black holes. Image via Nobel Media.

Earlier this month (October 6, 2020), the Nobel Prize in physics was announced for two groundbreaking discoveries in astrophysics, both centered on black holes. Half of 2020’s prize went to mathematician Roger Penrose of the University of Oxford “for the discovery that black hole formation is a robust prediction of the general theory of relativity.” The other half went jointly to Reinhard Genzel of the Max Planck Institute for Extraterrestrial Physics in Germany and Andrea Ghez of University of California, Los Angeles, “for the discovery of a supermassive compact object at the center of our galaxy.”

It was a great moment for black hole physics as well as for the astronomy and astrophysics field in general. And it’s a wonderful time to contemplate the fascinating history of black hole science.

Black holes are exotic objects in space. The classic scenario for black hole formation centers on a massive star that runs out of the internal fuel it needs to shine. The star collapses under the pull of its own self-gravity, leaving behind a high-density, compact object with an immense gravitational pull. A black hole is a place in space containing an object so dense and so compact that it forms a region around itself from which light cannot escape. The boundary of this region is known as an event horizon. Once past a black hole’s event horizon, the gravitational pull of the hole is inexorable.

If there is material in space near the black hole – and if this material draws too close – it’s pulled inside. But it doesn’t just drop all at once into the hole; instead, it forms a glowing disk surrounding the black hole called an accretion disk. Friction within the accretion disk can heat the disk to billions of degrees, causing it to emit radiation across the electromagnetic spectrum. Thus, although no light can escape a black hole, astronomers can observe black holes in space via their accretion disks.

What’s more, in the process of conservation of angular momentum, black holes can cause outbursts which come out perpendicular to the accretion disk. These outbursts are called jets by astronomers, and they can propel material out into space at relativistic speeds, that is, speeds that are a significant fraction of the speed of light (186,000 miles or 300,000 km per second). Astronomers can study black hole jets, too, to learn more about black holes.

Development of theories of black holes

All of the above was theory, developed in the 20th century. Albert Einstein’s General Theory of Relativity, published in 1916, contained the seeds of the modern concept of black holes, although the first ever mention of a similar concept is found in 1783, when an English natural philosopher by the name of John Michell theorized the existence of massive objects from which light cannot escape.

Einstein’s theory of relativity discusses the curvature of space-time as a result of gravity. This curvature causes an object to move along a curved path equivalent to a straight line in the absence of gravity. The theory allowed for the existence of matter packed in small and infinitely warped space. The theory was published as The Field Equations of Gravitation in 1915.

While serving in the German Army during World War I, astronomer and director of the Astrophysical Observatory in Potsdam Karl Schwarzschild was the first to solve Einstein’s field equations. His solution successfully described how space-time is curved, not just around a planet or a star, but also around theoretical high-density masses, such as black holes. In the space around an object that’s dense enough, and massive enough, gravity is so strong that even light – the fastest-moving stuff in the universe at 186,000 miles (300,000 km) per second – cannot escape. Thus it was Schwarzschild who first conceived of the event horizon, or boundary region around a black hole. Today, physicists speak of the Schwarzschild radius, which is (basically) the radius of a black hole’s event horizon. Schwarzschild’s solution to Einstein’s field equations also elegantly explained the concept of a singularity – the central point of a black hole – a point in space where all the laws of physics break down.

At first, this concept was considered a mathematical curiosity. Scientists, including Einstein, had no idea such objects could exist in nature.

But 50 years later, in 1965, Roger Penrose, working with the great theoretical physicist and cosmologist Stephen Hawking, showed that the black holes can indeed exist in nature and that they can form through a stable and robust process. And in fact, for some stars, black holes are the ultimate fate, an unavoidable outcome of stellar collapse.

The momentous work by Penrose and Hawking opened a new era in the study of black holes. Penrose’s work was also pivotal in showing how black holes emit energy through the Penrose process, in the form of jets and outbursts.

In the meantime, it was physicist John Wheeler who, in 1967, popularized the term black hole. Wheeler summarized Einstein’s equations as:

Space-time tells matter how to move; matter tells space-time how to curve.

Astronomers didn’t discover the first stellar-mass black hole – Cygnus X-1 – until after the middle of the 20th century. A 1964 rocket flight revealed Cygnus X-1 as one of the strongest sources of X-rays that had yet been seen from Earth. By the 1970s, most astronomers believed Cygnus X-1 was indeed a black hole. It’s now thought to be a black hole with a mass some 14.8 times that of our sun and an event horizon with a radius of around 27 miles (44 km). That’s in contrast to our sun’s radius of about 433,000 miles (696,000 km).

Stellar-mass black holes are hard to find because of their quiescent nature. They might display short and unpredictable outbursts when some passing material strikes their accretion disks, after which they might go quiet for decades.

That is why it took the discovery of supermassive black holes at the centers of most galaxies, including our own Milky Way, to give black hole science its real boost.

Among the many observed black hole candidates, the one at the center of our own Milky Way galaxy is called Sagittarius A* (Sgr A*, pronounced Sagittarius A-star). Two independent studies carried out in the last 25 years, led by Andrea Ghez and Reinhard Genzel – joint winners of half of 2020’s Nobel prize in physics – mapped the stars orbiting an invisible object at the center of our Milky Way. Using the powerful telescopes at Keck Observatory in Hawaii and the Very Large Telescope in Chile, the teams focused on one star known as S0-2. S0-2 orbits closer to our galaxy’s central supermassive black hole than any other observed star.

Knowing the orbital period of the star S0-2, its very elongated elliptical orbit and the distance of its closest approach to our galaxy’s central black hole enabled scientists to calculate the mass of Sgr A* as the equivalent of 4 million solar masses. The teams were able to observe two full orbits of the star S0-2 around the central black hole, which further bolstered their claims and also proved, through observations, what Einstein, Schwarzchild, and Penrose had predicted in theory about black holes.

The region around Sagittarius A* in the center of our galaxy. Left: X-ray (blue) and infrared emission (red and yellow). The inset (X-ray only) shows the hot gas captured by the central black hole, Sgr A*. Image via NASA/ UMass/ D.Wang et al./ NASA/ STScI. Right: orbits of stars in the galactic center observed over 15 years. Image via Andrea Ghez/ UCLA Galactic Center Group.

Further validation of Einstein’s general theory of relativity came when, on April 10, 2019, the Event Horizon Telescope collaboration released the first-ever image of a black hole in the relatively nearby (by cosmic standards) galaxy known as M87, visible in the constellation Virgo. The gargantuan black hole in M87’s center weighs a whopping 6.5 billion solar masses. The galaxy M87 and its famous jet – an energetic outflow of high energy particles from its center – had been observed for several decades. However, this was the first ever successful attempt at direct imaging of its black hole. The image shows a bright ring formed by the bending of light at the boundary of the black hole’s event horizon, caused by its extreme gravitational pull.

A follow-up of these observations came in September 2020, when the Event Horizon Telescope collaboration released more measurements of M87’s black hole observed in 2009, 2011, 2012 and 2013. Analysis from these observations reveal interesting and exciting information about the swirling of the bright ring caused by bending of light, and also a crescent-like feature which seems to be changing its orientation over the period of observations, giving the ring an appearance of wobbling.

These latest results by the Event Horizon Telescope team have opened a new window to our understanding of the physics of black holes and their gravity.

With this new knowledge and the emergence of more advanced ground- and space-based telescopes and technologies in the next decade or so, we are on the cusp a new, exciting era in the research in black hole physics and astronomy. We still have no observational evidence whether normal physics is valid inside black holes. Future observations of black holes and their surroundings will very likely add greatly to our understanding of black holes and may bring us new theories in physics and astronomy. 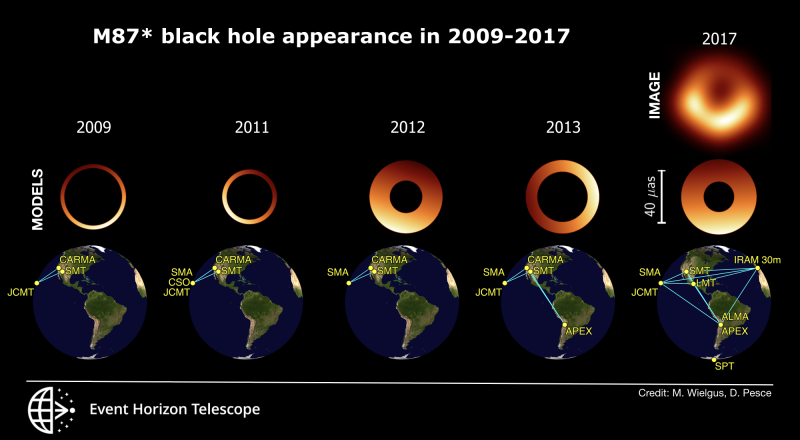 The famous image of the M87* black hole (top right) and models based on data observed earlier (2009-2013, middle row) by the Event Horizon Telescope, which consists of an array of telescopes. The diameter of all rings is similar, but the location of the bright side varies. Image via M. Wielgus/ D. Pesce/ Event Horizon Telescope collaboration.

Bottom line: The 2020 Nobel prize in physics went to Roger Penrose, Reinhard Genzel, and Andrea Ghez for their groundbreaking work in the observation and theory of black holes. This article traces the history of our understanding of black holes.

Sayali has a Ph.D. in Space Sciences from Florida Institute of Technology. Her research interests are active galactic nuclei and the physics of their jets. She has a passion for science outreach and communication and is engaged in same through Facebook page, ‘Astronomyn’. Being a STEM education enthusiast, she writes popular science articles on the current research and progress in the field of astronomy. She actively provides guidance on education and careers in astronomy via email and social media communication. She has been co-conducting critical thinking and science workshops for elementary and middle schoolers since summer 2020.