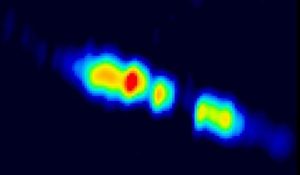 https://images.nrao.edu/125
This image is part of a program to monitor the water masers and the continuum emission in NGC 1052 to detect motions of the masers and the continuum “blobs”. NGC 1052 is an elliptical galaxy that shows evidence of nuclear activity. It has been optically classified as a LINER and Sy 2, like the well-studied spiral NGC 4258. Very luminous water masers have been detected from the nucleus in NGC 1052, but the spectrum is relatively smooth, unlike the narrow maser spikes seen in other active galaxies. It is only one of two elliptical galaxies where water masers have been detected. The radio continuum emission from NGC 1052 shows a very symmetric, double-sided and bright jet on VLBI scales. The contour map (a 22 GHz VLBA + Effelsberg image observed in November, 1995) shows a “gap” of emission, which is thought to be where the nuclear core (i.e. the black hole) is located. The positions of two groups of water masers are denoted by the two crosses on the contour plot. It is clear that the masers lie along, rather than perpendicular to, the jet axis. If the masers were in a circumnuclear disk around the central engine, as in NGC 4258, we would expect to see them in the “gap”, and spread out perpendicular to the jet. Thus the conclusion is that the masers are associated with the jet itself, possibly where the jet drives shock waves into circumnuclear, dense molecular clouds.
Investigator(s): M.J. Claussen, P.J. Diamond, J.A. Braatz, A.S. Wilson, and C. Henkel

Thank you! Your submission has been received!
Oops! Something went wrong while submitting the form.
END_OF_DOCUMENT_TOKEN_TO_BE_REPLACED