In the star-forming Cat’s Paw Nebula, baby stars heat up the gas surrounding them. The gas then expands to form bubbles in the nebula. 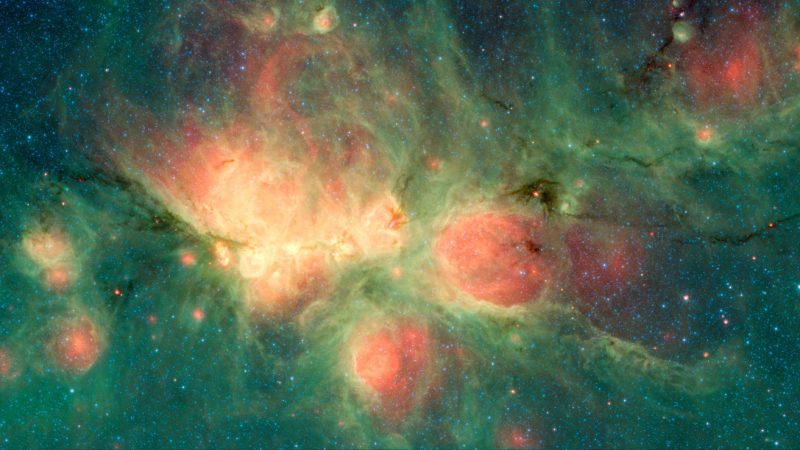 The Cat’s Paw Nebula is a star-forming region within our Milky Way galaxy. It’s located some 4,200 to 5,500 light-years away, in the direction of what we see as the constellation Scorpius the Scorpion. Image via NASA’s Spitzer Space Telescope/JPL-Caltech.

Do you see the cat’s paw in the image above? The region is called the Cat’s Paw Nebula for the large, round features that create an impression of a cat’s footprint. NASA released this image of the nebula on October 23, 2018. It’s pulled from data collected for the Galactic Legacy Mid-Plane Survey Extraordinaire project (aka GLIMPSE).

The nebula is a place where new stars are forming in our Milky Way. NASA wrote:

Framed by green clouds, the bright red bubbles are the dominant feature in the image, which was created using data from two of Spitzer’s instruments [the MIPS and IRAC instruments]. After gas and dust inside the nebula collapse to form stars, the stars may in turn heat up the pressurized gas surrounding them, causing it to expand into space and create bubbles.

In some cases, NASA said, the bubbles might eventually “burst,” creating the U-shaped features that are particularly visible in the image below, created using data from just one of Spitzer’s instruments. 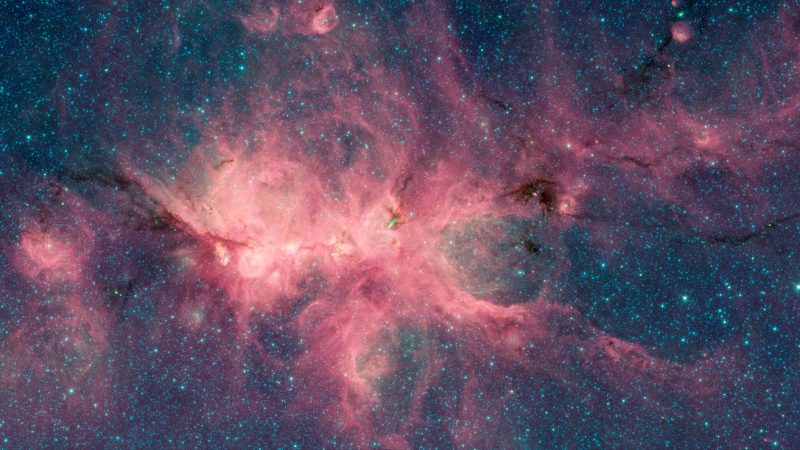 Here is the Cat’s Paw Nebula again, imaged by NASA’s Spitzer Space Telescope. The dark filament running through the middle of the nebula is a particularly dense region of gas and dust. Image via NASA/JPL-Caltech.

Spitzer is an infrared telescope, and infrared light is useful to astronomers because it can penetrate thick clouds of gas and dust better than optical light (the kind visible to the human eye). The black filaments running horizontally through the nebula are regions of gas and dust so dense, not even infrared light can pass through them. These dense regions may soon be sites where another generation of stars will form.

The Cat’s Paw star-forming region is estimated to be between 24 and 27 parsecs (80 and 90 light-years) across. It extends beyond the left side of these images and intersects with a similar-sized star-forming region, NGC 6357. That region is also known as the Lobster Nebula – an unlikely companion for a cat.

Read more about this image from NASA/JPL-Caltech

Find more about the Spitzer Space Telescope here, or here.

Bottom line: Spitzer Space Telescope images of the Cat’s Paw Nebula, a place where new stars are forming. Baby stars are heating gas in the nebula, causing bubbles to form in the gas.