New map from a 1989 spacecraft flyby gives us a glimpse of an unseen world. 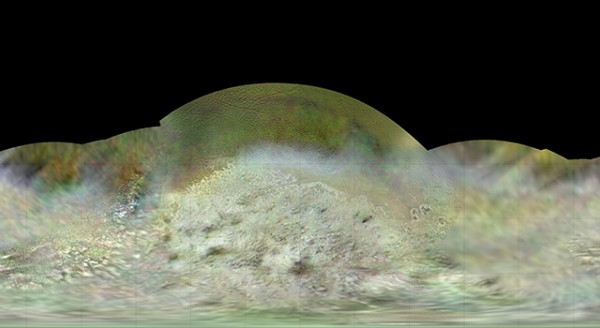 When the Voyager 2 spacecraft flew by Neptune in the summer of 1989. it captured images of Neptune’s large moon Triton. Now space scientists have released this new map of Triton, based on those 1989 images. Credit: NASA/JPL-Caltech/Lunar & Planetary Institute

In 1989, the Voyager 2 spacecraft provided the first close-up view of the planet Neptune and its large moon Triton. This week, NASA scientists released this best-ever global color map of Triton, made with those early Voyager 2 images. NASA said:

NASA’s Voyager 2 spacecraft gave humanity its first close-up look at Neptune and its moon Triton in the summer of 1989. Like an old film, Voyager’s historic footage of Triton has been “restored” and used to construct the best-ever global color map of that strange moon. The map, produced by Paul Schenk, a scientist at the Lunar and Planetary Institute in Houston, has also been used to make a movie recreating that historic Voyager encounter, which took place 25 years ago, on August 25, 1989.

The new Triton map has a resolution of 1,970 feet (600 meters) per pixel. The colors have been enhanced to bring out contrast but are a close approximation to Triton’s natural colors. Voyager’s “eyes” saw in colors slightly different from human eyes, and this map was produced using orange, green and blue filter images.

NASA scientists said they produced this map in honor of New Horizons’ upcoming sweep past Pluto less than a year from now. NASA said:

Triton may not be a perfect preview of coming attractions, but it serves as a prequel to the cosmic blockbuster expected when New Horizons arrives at Pluto next year.

On August 22, 1989, the definitive discovery of Neptune’s rings by Voyager 2