A new record for the most distant quasar

Astronomers have a new measurement for the distance of quasar J0313-1806, making it the new record-holder for the most distant quasar known. We’re seeing it just 670 million years after the Big Bang, or more than 13 billion light-years away. 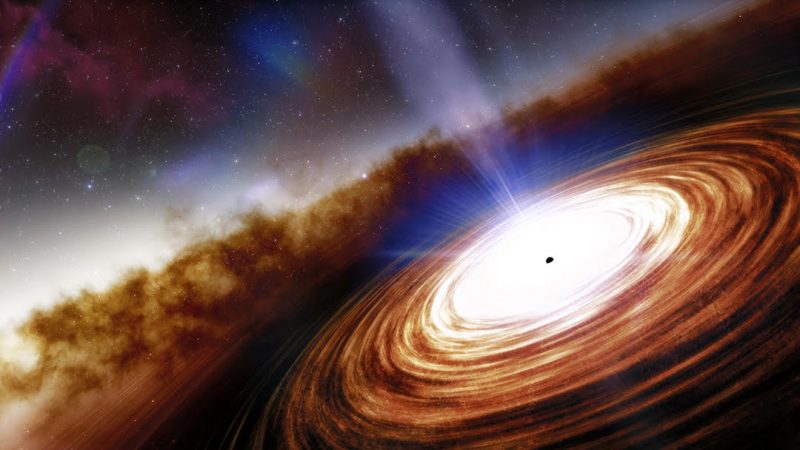 Artist’s impression of quasar J0313-1806, a highly luminous object in the early universe. Like all quasars, it’s thought to be powered by a supermassive black hole. Image via NOIRLab/ NSF/ AURA/ J. da Silva/ Keck Observatory. View an annotated version of this image.

Keck Observatory and NSF’s NOIRLab both announced on January 12, 2021, that astronomers have located an object that sets a new record for being the most distant quasar and thus the most distant supermassive black hole. They said they’re seeing the quasar – labeled J0313-1806 – just 670 million years after the Big Bang, or more than 13 billion light-years away. It’s estimated to be some 1,000 times more luminous than our Milky Way galaxy, which is why we can still see it across such a great distance. This object is thought to be powered by what’s now the earliest known supermassive black hole in our universe, weighing in at more than 1.6 billion times the mass of our sun. Astronomers released this result this week at the January 2021 virtual meeting of the American Astronomical Society.

A paper outlining the new work has been accepted for publication in the peer-reviewed Astrophysical Journal Letters and is available in preprint format on arXiv.org.

The astronomers didn’t just investigate the quasar’s distance; they also found a high-velocity wind apparently flowing from the central supermassive black hole at some 20% of light-speed.

When astronomers first began seeing quasars in the 1950s, they gave them a name that means quasi-stellar (star-like) radio source. In other words, radio telescopes first spotted them, and the first optical telescopes saw them as point-like, like stars. But by the 1960s and ’70s, quasars’ spectra had revealed them to be exceedingly distant. And astronomers wondered how such distant objects could emit such copious amounts of radiation and still be visible from so far away.

That’s when the idea of quasars being powered by supermassive black holes began to take hold. Now, as explained by Keck Observatory, quasars are seen as:

The amount of energy emitted by quasars is enormous, with the most massive examples easily outshining entire galaxies.

Quasars are typically so distant that astronomers don’t speak of their distances in light-years. A distance in light-years can only be inferred, not measured directly. What can be measured is the object’s redshift, which correlates to its distance. Quasar JO313-1806 has a record-setting redshift of z = 7.64.

Astronomers who made this new measurement said that the presence of such a massive black hole so early in the universe’s history challenges theories of black hole formation. Feige Wang, a NASA Hubble fellow at the University of Arizona and lead author of the research paper, explained:

Black holes created by the very first massive stars could not have grown this large in only a few hundred million years.

In addition to weighing the monster black hole, the Keck Observatory and Gemini North observations uncovered an extremely fast outflow emanating from the quasar in the form of a high-velocity wind traveling at 20% of the speed of light. Astronomer Jinyi Yang at the University of Arizona – a co-author on the new paper – commented:

The energy released by such an extreme high-velocity outflow is large enough to impact the star formation in the entire quasar host galaxy.

The astronomers said this is:

… the earliest known example of a quasar sculpting the growth of its host galaxy, making J0313-1806 a promising target for future observations.

The galaxy hosting J0313-1806’s is undergoing a spurt of star formation, producing new stars 200 times faster than the Milky Way. The combination of this intense star formation, the luminous quasar, and the high-velocity outflow make J0313-1806 and its host galaxy a promising natural laboratory for understanding the growth of supermassive black holes and their host galaxies in the early universe.

This would be a great target to investigate the formation of the earliest supermassive black holes. We also hope to learn more about the effect of quasar outflows on their host galaxy, as well as to learn how the most massive galaxies formed in the early universe. 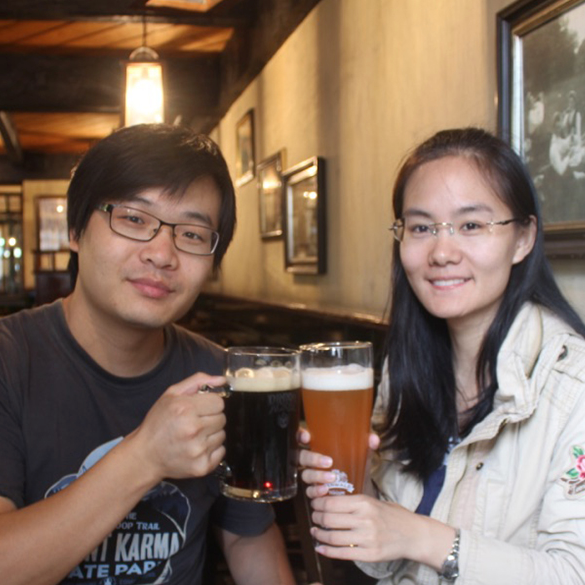 Astronomers Feige Wang and Jinyi Yang, both of Steward Observatory at the University of Arizona, helped measure the distance for quasar J0313-1806, the current record-holder for the most distant quasar known in our universe. Image via Feige Wang. Used with permission.

Bottom line: Astronomers have a new measurement for the distance of quasar J0313-1806, making it the new record-holder for the most distant quasar known. We’re seeing it just 670 million years after the Big Bang, or more than 13 billion light-years away. The astronomers also found a high-velocity wind apparently flowing from this quasar’s central, supermassive black hole at some 20% of light-speed.

Source: A Luminous Quasar at Redshift 7.642