Io’s volcanic activity may be due to a unique combination of ordinary gravitational squeezing by Jupiter and friction on molten rock within Io’s interior.

The New Horizons spacecraft – which recently visited Pluto – captured this five-frame sequence of the giant plume from Io’s Tvashtar volcano, as it swept past the Jupiter system. Image via NASA/JHU Applied Physics Laboratory/Southwest Research Institute.

In a new study announced by NASA on September 10, 2015, Robert Tyler of NASA’s Goddard Space Flight Center explained a new model for what generates the volcanos on Io, the innermost of Jupiter’s four large Galilean satellites. Io has been known for decades as the most volcanically active object in our solar system, with hundreds of observable eruptions ejecting lava up to 250 miles (400 km) off the little moon’s surface. Tyler said that the gravitational influence of Jupiter on a slurry molten interior of Io – internal magma seas – is what causes the mysterious misplaced volcanoes on Io’s surface.

Previous theories assumed Io was a solid object, but deformable (like clay). It was assumed Io was slightly deformed from tidal effects by Jupiter, that is, the effect of Jupiter’s gravitational squeezing its innermost large moon. However, when scientists compared computer models based on this assumption to actual spacecraft photos of Io’s surface, they discovered that most of Io’s volcanoes were offset 30 to 60 degrees East of where the models predicted the most intense heat should be produced.

As an inner moon of Jupiter’s, Io orbits faster than the next large moon outward, Europa, completing two orbits every time Europa completes one. This regular timing leads Io to feel the strongest gravitational pull from the same orbital location, which distorts its shape. This intense and consistent geological activity was known to be the result of a pulling between Jupiter and its other moons – which causes material within Io to shift, generate heat, and distorts it shape. Yet even this interaction with Europa could not explain the misplaced volcanoes on Io. Wade Henning of NASA Goddard said in a September 10 statement from NASA:

It’s hard to explain the regular pattern we see in so many volcanoes, all shifting in the same direction, using just our classical solid-body tidal heating models.

Io’s odd volcanic activity called for a new explanation, which incorporated heat from not just the tidal flexing by Jupiter, but also the heat generated by something else. In this new model, the heat comes from the magma’s movement itself. 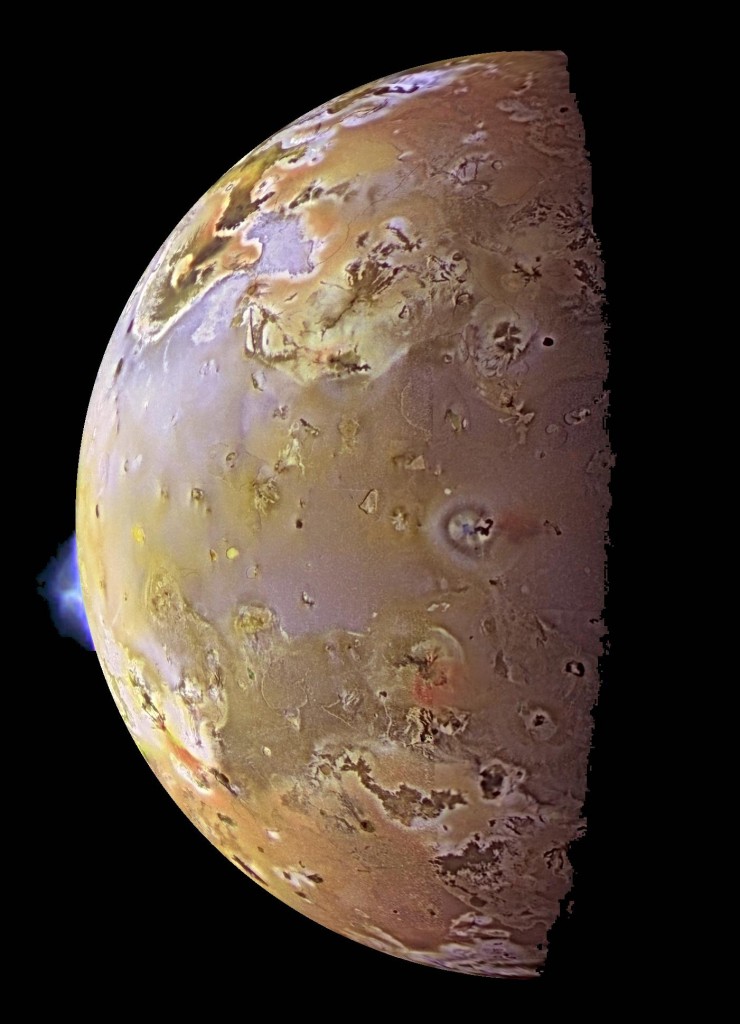 The new study looks promising because it has helped explain the details of the misplaced volcanoes on Io. Christopher Hamilton, a study co-author from the University of Arizona, said:

Fluids – particularly ‘sticky’ (or viscous) fluids – can generate heat through frictional dissipation of energy as they move.

The team now believes the molten interior of Io is a slurry mix of liquid (magma) and solidifying rock. As this molten mix flows under the influence of tidal flexing, it swirls and rubs against the surrounding solid rock, generating heat due to friction. Hamilton said:

This process can be extremely effective for certain combinations of layer thickness and viscosity which can enhance heat production.

The fluid tidal heating component of a hybrid model best explains the equatorial preference of volcanic activity and the eastward shift in volcano concentrations … [meanwhile,] simultaneous solid-body tidal heating in the deep-mantle could explain the existence of volcanoes at high latitudes.

Both solid and fluid tidal activity generate conditions that favor each other’s existence, such that previous studies might have been only half the story for Io.

This new NASA research implies that oceans beneath the crusts of tidally stressed moons may be more common and last longer than expected. The phenomenon applies to oceans made from either magma or water, potentially increasing the odds for life elsewhere in the universe. According to the NASA statement:

Certain tidally stressed moons in the outer solar system, such as Europa and Saturn’s moon Enceladus, harbor oceans of liquid water beneath their icy crusts. Scientists think life might originate in such oceans if they have other key ingredients thought to be necessary, such as chemically available energy sources and raw materials, and they have existed long enough for life to form. The new work suggests that such subsurface oceans, whether composed of water or of any other liquid, will be more common and last longer than expected, both within our solar system and beyond. 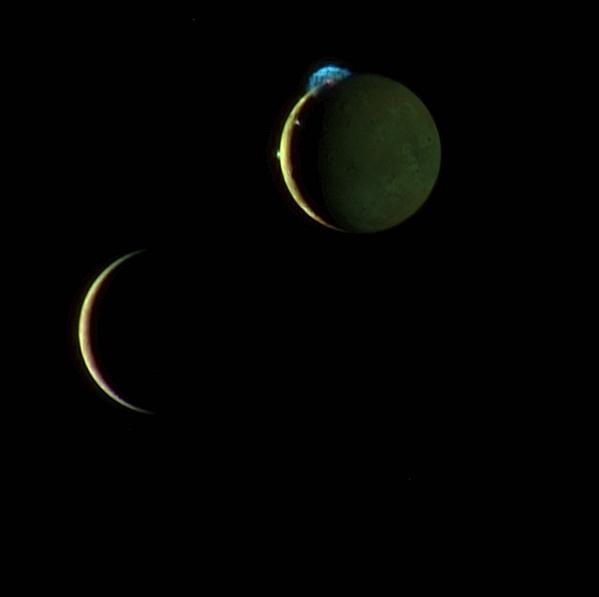 This is a composite image of Io and Europa taken March 2, 2007 with the New Horizons spacecraft. Here Io is at the top with three volcanic plumes visible. The 300-kilometer (190-mile) high plume from the Tvashtar volcano is at the 11 o’clock position on Io’s disk, with a smaller plume from the volcano Prometheus at the 9 o’clock position on the edge of Io’s disk, and the volcano Amirani between them along the line dividing day and night. Image via NASA/JHU Applied Physics Laboratory/Southwest Research Institute

Bottom line: For the first time, the mysterious geologic activity of Jupiter’s moon Io has been closely studied in such a way as to reveal the reason for Io’s misplaced volcanoes. These are volcanos that are shifted in location, in a regular way, from what previous models suggested. The new work suggests that Io’s curious volcanic activity is due to a unique combination of ordinary gravitational tidal forces from Jupiter and friction on molten rock within Io’s interior.