We’ve had lots of reports of meteors this week, and most are probably part of the Geminid meteor shower, scheduled to peak late night December 13 to dawn December 14 as seen from around the globe. But NASA is saying there’s a second possible meteor shower that could significantly boost the number of meteors you’ll see. The source of the possible new shower is Comet 46P/Wirtanen. Bill Cooke of NASA’s Meteoroid Environment Office says debris left in Wirtanen’s orbit might produce as many as 30 meteors per hour, added to the 100 meteors per hour from the Geminids. That would be an awesome meteor show! 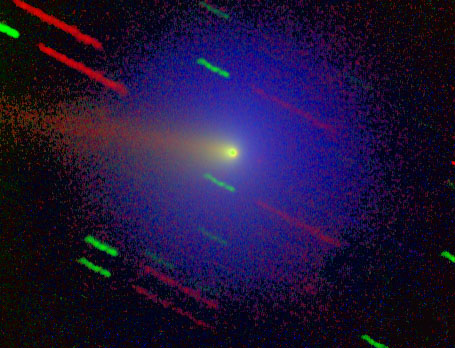 Why do scientists think a new meteor shower might coincide with the Geminids? Meteors in annual showers stem from debris left behind by comets. The cometary debris in space moves in streams, which are called meteoroid streams. Russian meteor forecaster Mikhail Maslov used computer models to predict as many as four meteoroid stream crossings – in other words, four crossings of streams of debris left behind by Comet Wirtanen – between December 10 and 14, 2012. If Earth does encounter this debris from Wirtanen, as predicted by Mikhail Maslov, the debris will enter our atmosphere and vaporize due to friction with the air. We on Earth will see meteors, or shooting stars.

How can I tell the two meteor showers apart? There’s no real need to distinguish, but, if the new shower materializes, you can notice that meteors are radiating from two points in the sky. The radiant point for the Geminids is in the constellation Gemini, which is well up in the east in mid-evening now. The radiant point for the new shower would be in the constellation Pisces, so the new shower – if it materializes – might be called “Piscids.” The shower hasn’t been named yet, however, since no one knows if it will come to pass.

If it materializes, the new meteor shower will radiate from the constellation Pisces, which is high in the sky – but descending in the west – when darkness falls. Look for the Piscid meteors in early evening. They’ll be moving in a direction opposite the Geminid meteors, whose radiant is ascending in the east at that time. Image via NASA.

Pisces is already up when darkness falls. In fact, it’s descending in the west as Gemini is ascending in the east. So the meteors in the two showers will be moving in different directions, with the Geminids radiating from the east in the evening hours, and the Piscids radiating from the west. Plus, Mikhail Maslov is predicting the meteors will be very slow moving. The Geminids will be moving faster, so that’s another way you might be able to distinguish them.

When should I watch for meteors? You can watch for both meteor showers beginning tonight! But the best night should be December 13-14 as seen from around the world. The new shower should be best in early evening, since its radiant point is already descending in the west when darkness falls and will set during the course of the night. The Geminids should be flying until dawn – best around 2-3 a.m. (that’s local time, or the time no matter where you are on the globe) when the constellation Gemini is highest in the sky. 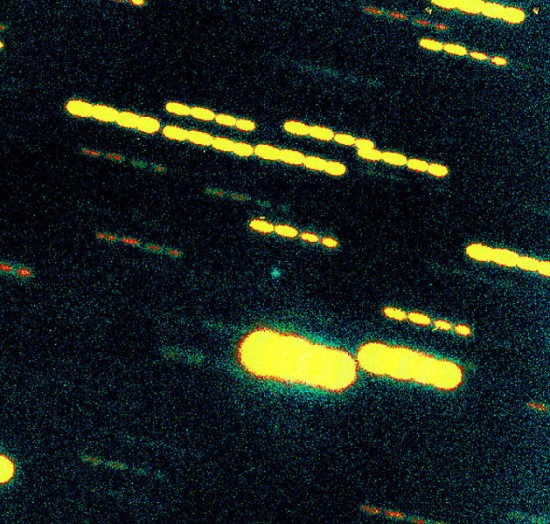 Comet Wirtanen on December 9, 2001 via ESO. The yellow streaks are long-exposure images of stars. The comet is the tiny green dot in the center of the photo.

By the way, Comet Wirtanen was discovered in 1948, just after World War II, and takes 5.4 years to orbit the sun. It reaches its closest point to the sun just outside Earth’s orbit. Although this comet has skirted Earth’s orbit many times, Earth has not run into its debris streams before, but 2012 could be different.

Bottom line: A Russian meteor forecaster Mikhail Maslov has used a computer to learn that Earth might cross streams of debris left behind by Comet Wirtanen four times between December 10 and 14. If so, there’s a new meteor shower in the offing this week, which will coincide with the annual Geminid shower. The new shower might produce as many as 30 meteors per hour. The Geminids might produce 100 meteors per hour. Start watching tonight! Best on the night of December 13-14 as seen from around the world.