Images released Friday, October 9. New Horizons acquired them when it swept past the Pluto system on July 14. The spacecraft’s data are still being returned. 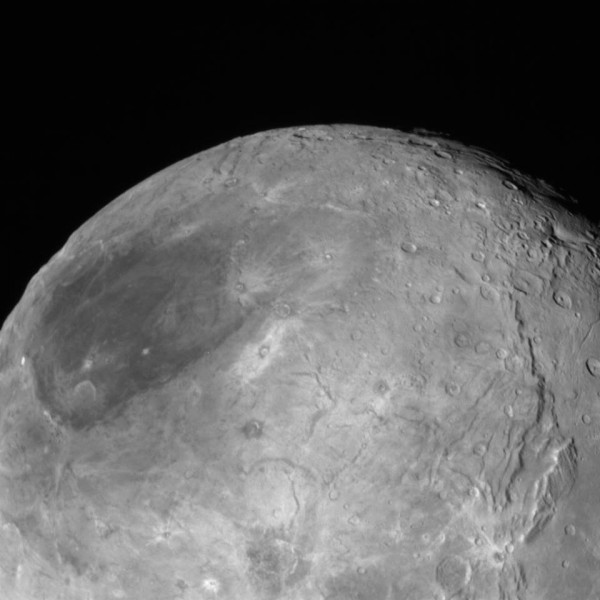 These images of Pluto’s large moon Charon are from July, 2015, when the New Horizons spacecraft swept past the Pluto system. The images were just returned recently and seen for the first time on Friday, October 9, 2015. I have cropped out excessive large areas of black space and contrast, enhanced a couple. Other than that, the images on this page are the originals. 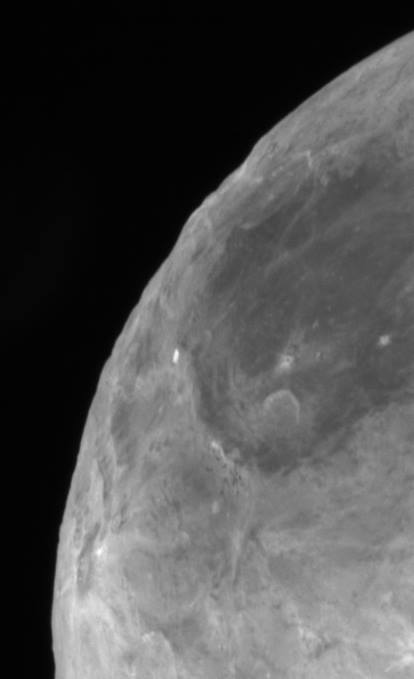 New Horizons passed Charon, after a journey of nearly a decade, at a closest approach of 17,931 miles (28,858 km) on July 14. The spacecraft is still sending back data from the close flyby and will continue to do so for another year or more. These images are not from quite as close as those received the other day. These were when New Horizons was about 124,000 miles (200,000 km) away, approximately four hours away from closest approach to Charon (New Horizons approached and passed by at approximately 31,000 mph, or 50,000 kph).

There are a fair few impact craters, though the surface is not saturated by cratering. 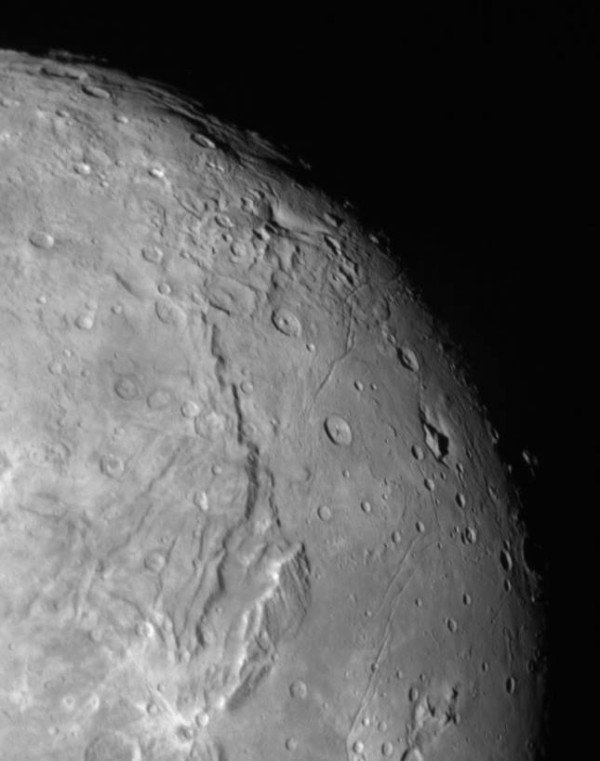 Charon has been geologically active until recent times or could still be. Very strange as Charon is not tidally heated by its proximity to Pluto. Nor is Charon’s density high enough to account for sufficient radioisotopes to keep its interior warm.

Some strange geology is going on. 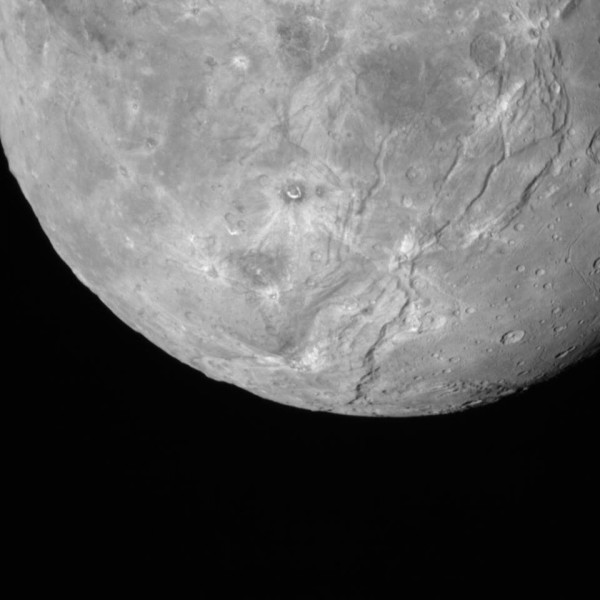 The area to the lower half is informally known as Vulcan Planum, huge smoother plains, with fewer craters and there are a large number of narrower rilles. Looks like the crust of Charon pulled apart and slushy ice rich cryolavas erupted forming a new surface then froze solid in the intense cold.

The dark polar hood, informally named Mordor Macula, is certainly frozen gas. What happens is that as the top of Pluto’s atmosphere is stripped away, some of it flows onto Charon. Because Charon’s poles are so cold, particularly in the Hadean system winter and early spring, with Charon’s poles chilling to a phenomenal minus 433 Fahrenheit (minus 258 Celsius), the gas – mostly nitrogen, carbon monoxide and methane – freezes as ice. When the sun climbs and reaches the Hadean summer, the temperature rises to minus 351 Fahrenheit (minus 213 Celsius), the carbon compounds in the frozen methane create tholins, hence the darker, redder region around the pole. 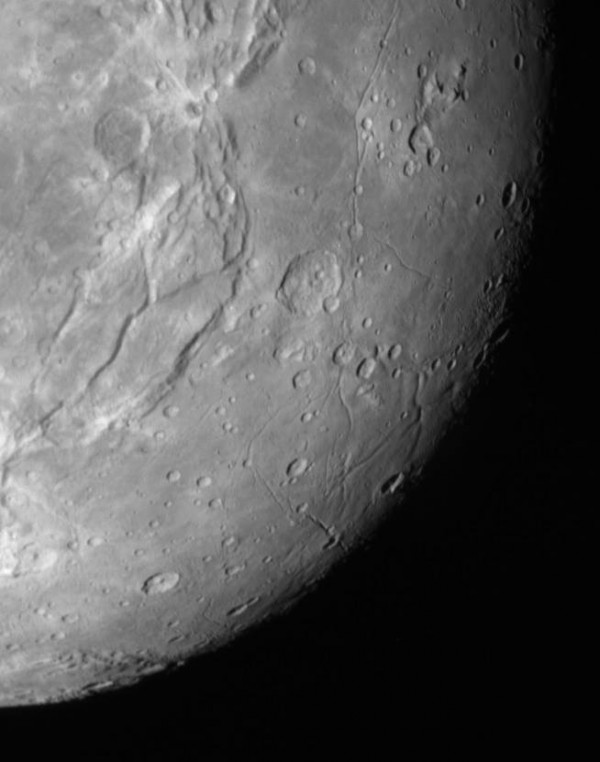 The curious mountain in a hollow – the mountain currently known as Kubrick Mons – is approximately 16,400 feet (5,000 meters) tall. It’s visible on one frame, and others shows rilles, mountains and craters.

Mysterious grooves are in the area as well as sinuous rilles.

Charon, in my opinion, is as interesting as Pluto and would have been worth the trip of New Horizons if was a lone body without Pluto. 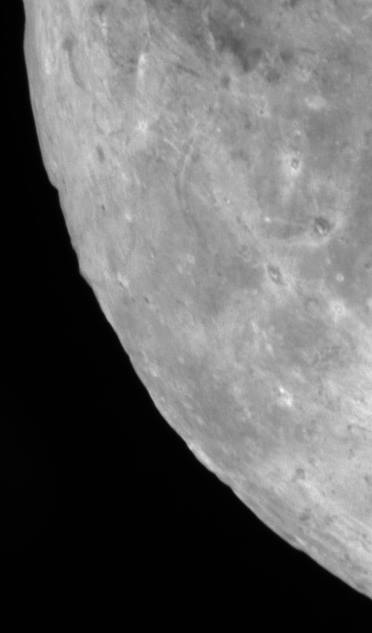 By the way, Charon and Pluto circle around their common center of gravity once every 6 days, 9 hours and 18 minutes. Pluto and Charon also rotate on their axis in exactly the same time so they both keep the same side turned towards each other separated by 12,154 miles (19,571 km).

Charon has a mean global density of 1.65 times that of pure water ice, suggesting a ratio of 45% water ice and 55% rock.

The average surface temperature of Charon: minus 367 Fahrenheit (minus 222 Celsius).

If our own Earth cooled to the average surface temperatures on Charon, our oceans would freeze almost all the way down and our atmosphere would collapse and freeze into a layer of frozen gasses 35 feet (11 meters) thick.

Bottom line: Images released Friday, October 9. New Horizons acquired them when it swept past the Pluto system on July 14. The spacecraft’s data is still being returned.