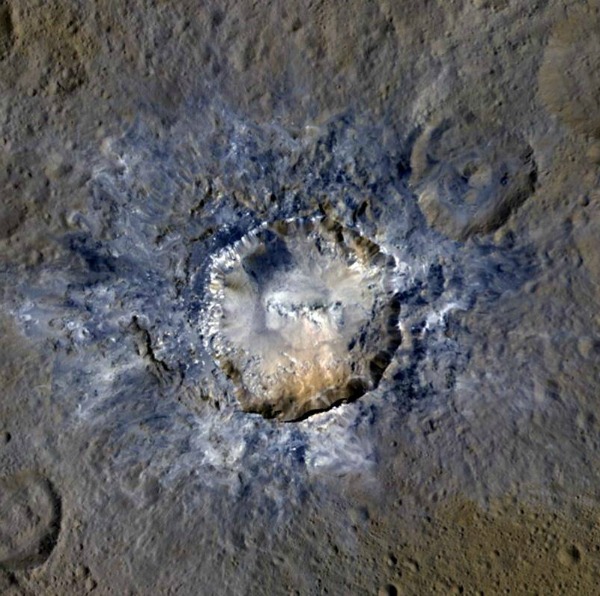 Ceres’ Haulani Crater, shown in enhanced color, with a diameter of 21 miles (34 km), shows evidence of landslides from its crater rim. Image via NASA/JPL-Caltech/UCLA/MPS/DLR/IDA

Now in its lowest-altitude mapping orbit, at a distance of only 240 miles (385 km) from the dwarf planet Ceres, the Dawn spacecraft has been providing scientists with spectacular views of the dwarf planet since it went into orbit about 13 months ago. Here are a few new ones. The enhanced false-color image (above) shows one of the bright craters on Ceres, Haulani Crater, which has a diameter of 21 miles (34 km). Ceres itself has a diameter of 590 miles (950 km).

This new Dawn image shows evidence of landslides from Haulani’s crater rim. Smooth material and a central ridge stand out on its floor.

The image also shows rays of bluish ejected material. The color blue in such views has been associated with young features on Ceres and provides insights into how the crater formed. Martin Hoffmann is co-investigator on the Dawn framing camera team. He said:

Haulani perfectly displays the properties we would expect from a fresh impact into the surface of Ceres. The crater floor is largely free of impacts, and it contrasts sharply in color from older parts of the surface.

Notice the polygonal nature of the crater; that is, notice the straight lines forming the crater rim. They’re noteworthy because most craters on planetary bodies, including those on Earth, are nearly circular. The straight edges of some craters on Ceres, including Haulani, result from pre-existing stress patterns and faults beneath the surface, say scientists. 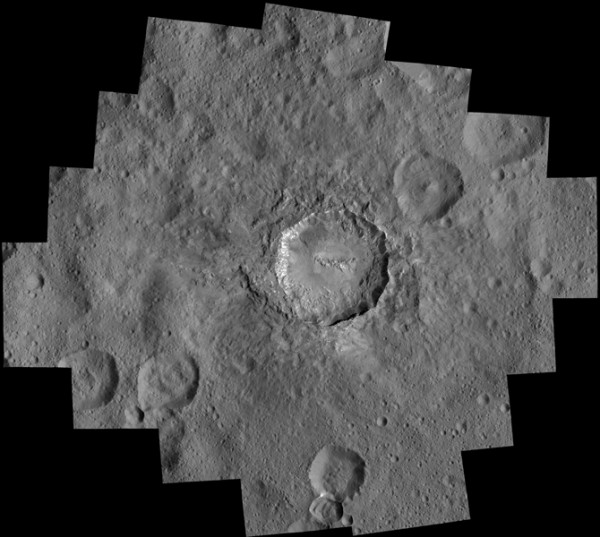 Dawn spacecraft image of Haulani, at a distance of 240 miles (385 km) from the surface of Ceres. Notice the straight lines that form the crater rim. Image via NASA/JPL-Caltech/UCLA/MPS/DLR/IDA/PSI

Now check out another Ceres crater – the 6-mile-wide (10-km-wide) Oxo Crater – in the image below. It’s the second-brightest feature on Ceres. Only Occator’s central area – containing what’s known as Spot 5, the brightest of the famous Ceres bright spots – is brighter.

Oxo lies near the 0-degree meridian that defines the edge of many Ceres maps, making this small feature easy to overlook.

Oxo is also unique because of the relatively large “slump” in its crater rim, where a mass of material has dropped below the surface. Dawn science team members are also examining the signatures of minerals on the crater floor, which appear different than elsewhere on Ceres. 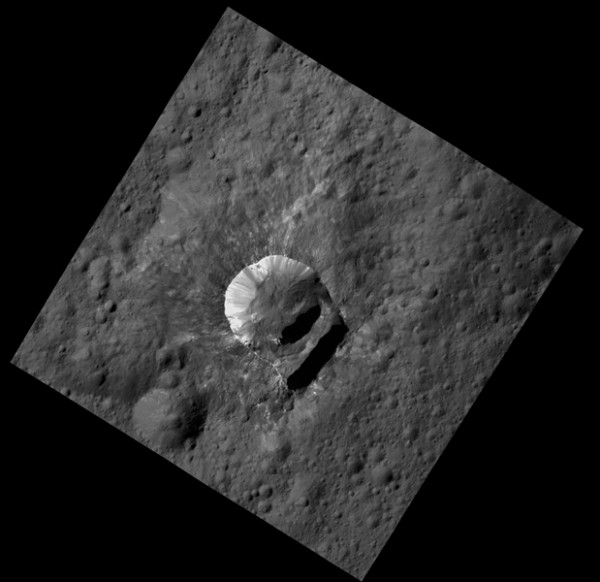 The 6-mile-wide (10-km-wide) crater is named Oxo. It’s the second-brightest feature on Ceres. Only Occator’s central area is brighter. Image via NASA/JPL-Caltech/UCLA/MPS/DLR/IDA/PSI

Bottom line: New Dawn spacecraft images of two craters on Ceres, Haulani and Oxo. The images show that Haulani is probably a fresh impact into the surface of Ceres. Meanwhile, Oxo – easy to overlook near the 0-degree meridian on many Ceres maps – has an interesting slump in its crater rim.