The Event Horizon Telescope collaboration released a new image of the supermassive black hole in the center of massive galaxy M87 on March 24, 2021. The image shows the signatures of a magnetic field. 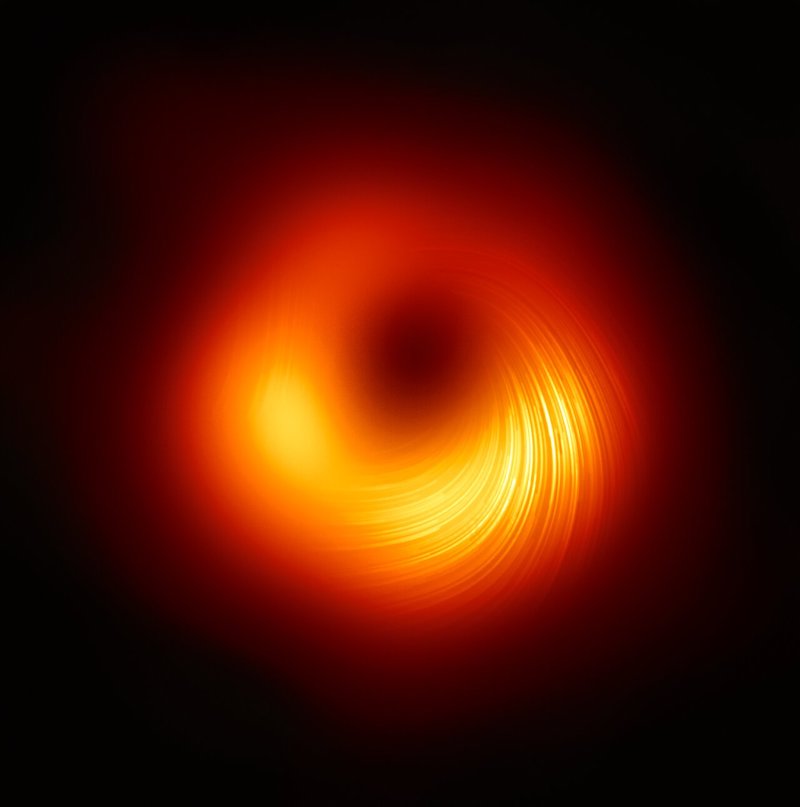 This is an image of polarized light in the vicinity of the supermassive black hole at the center of galaxy M87. The Event Horizon Telescope collaboration – a global network of radio dishes – observed it. The lines indicate the orientation of polarized light, which is directly related to the black hole’s magnetic field lines. Thus, for the first time, we have an image showing the “signature” of magnetic fields around a black hole. Image via EHT/ ESO.

In 2019, astronomers released the first direct image of a black hole, a feat that made headlines and boggled minds all over the world. The black hole was a supermassive one – millions of times our sun’s mass – at the heart of a relatively nearby galaxy known as M87. On March 24, 2021, the Event Horizon Telescope – the same global collaboration that captured M87’s black hole – released a new image showing polarized light from this black hole. The polarization of the light gives astronomers a signature (a representation) of a black hole’s magnetic field, for the first time.

The astronomers published their results in two papers (here and here) in the peer-reviewed Astrophysical Journal Letters on March 24, 2021, with a third one accepted for publication soon (here).

The black hole in M87 sends out enormous jets – matter ejected at nearly the speed of light – from its core. These observations are a key to understanding how this occurs, these astronomers said. Astronomer Monika Moscibrodzka of Radboud University in the Netherlands said in a statement:

We are now seeing the next crucial piece of evidence to understand how magnetic fields behave around black holes, and how activity in this very compact region of space can drive powerful jets that extend far beyond the galaxy.

Another astronomer involved in the project – Andrew Chael at the Princeton Center for Theoretical Science – further explained:

The newly published polarized images are key to understanding how the magnetic field allows the black hole to ‘eat’ matter and launch powerful jets.

When you measure light emanating from an astronomical source, sometimes some of it is polarized, in the same way the light going through a pair of polarized sun glasses is. Instead of lenses, though, it is magnetic fields in hot regions of space that polarize astronomical light. Thus, using telescopes to measure how the light is polarized will give you direct information about the magnetic fields that caused it.

Another team member on this black hole study – Jason Dexter of the University of Colorado, Boulder – explained:

The observations suggest that the magnetic fields at the black hole’s edge are strong enough to push back on the hot gas and help it resist gravity’s pull. Only the gas that slips through the field can spiral inwards to the event horizon. 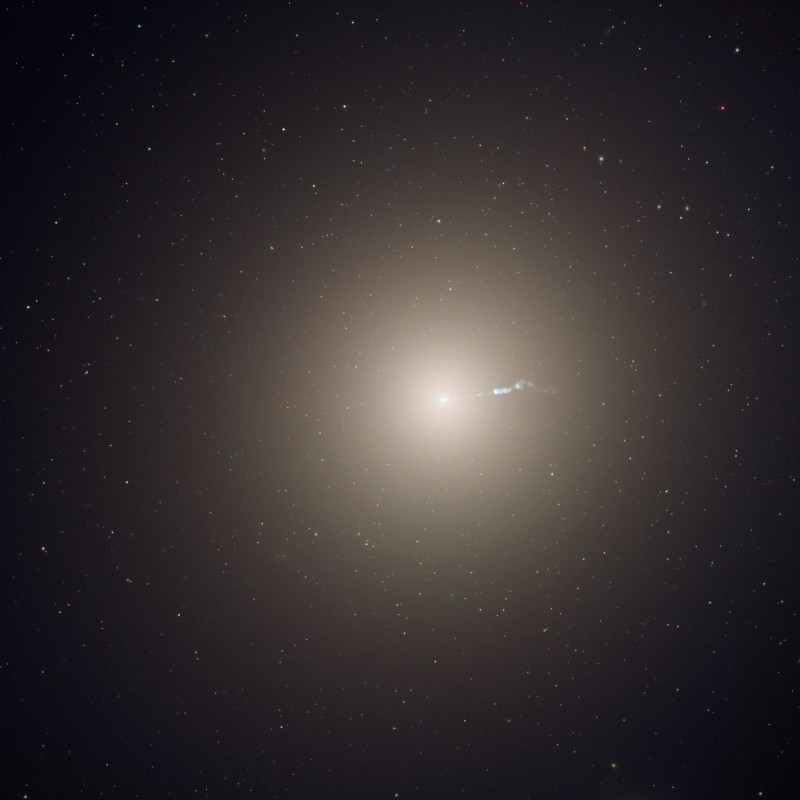 M87 is an enormous elliptical galaxy located 55 million light-years from us. Its central supermassive black hole is one of the most massive ones known, and, like a cosmic searchlight, a jet of subatomic particles traveling nearly at the speed of light is streaming out of it, as far out as about 6,000 light-years. Image via NASA/ ESA/ Hubble Heritage team.

M87 is an enormous elliptical galaxy – it consists mainly of older stars and does not exhibit the well-known spiral pattern of disk galaxies – that is located relatively nearby at 55 million light-years from us, in the Virgo galaxy cluster. It has about double the mass of our own Milky Way galaxy and contains about 10 times more stars. Another peculiar thing about this galaxy is that it has an unusual number of globular clusters of stars, around 12,000 of them, which can be compared to the more humble amount of 200 in the Milky Way.

The supermassive black hole of M87 is, in direct relation to the size of its host galaxy, one of the most massive that we know of. 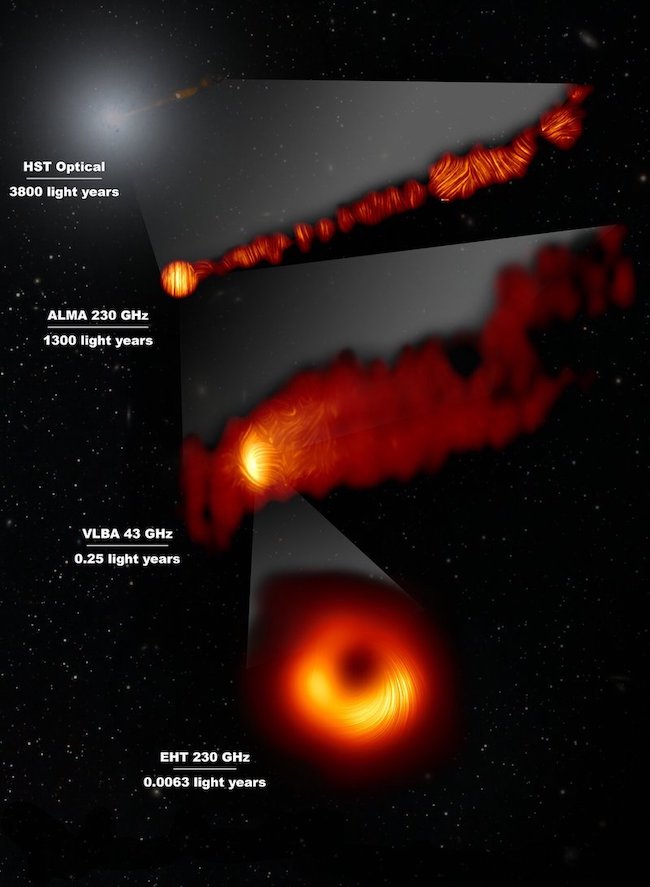 A diagram of M87 and its jet, emanating from the central black hole. Top: An image in visible (optical) light shows the jet stretching out thousands of light-years from the center. The following 3 images show the inner parts of the jet and the central black hole region in polarized light, thus indicating how the magnetic fields behave in these regions. Each image zooms in closer and closer to the supermassive black hole. The horizontal line is an indicator of the scale of each image, given in light-years. Read more about this image at ESO.

Bottom line: Astronomers released a new image of the supermassive black hole in the center of nearby galaxy M87, this time showing the signatures of the magnetic fields.