The largest sample yet of the faintest and earliest known galaxies in the universe, revealed by Hubble. Some formed just 600 million years after the Big Bang. 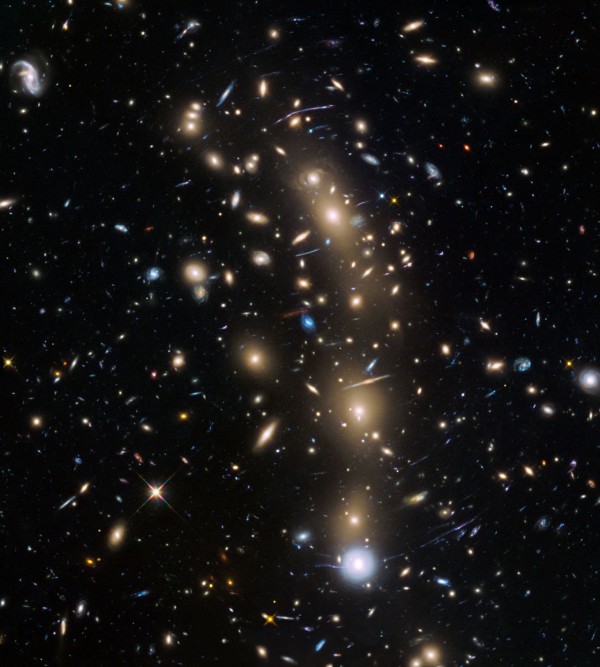 View larger. | The galaxy cluster MACS J0416.1–2403. It’s being studied by the Hubble Frontier Fields program. Due to the huge mass of the cluster it is bending the light of background objects, acting as a gravitational lens. Astronomers used this and two other clusters to find galaxies which existed only 600 to 900 million years after the Big Bang.

If we could look far enough away in space – and therefore far enough back in time – could we see the beginnings of the universe? The answer is surely yes, and now the Hubble Space Telescope has looked over 12 billion light-years away, and thus that far back in time, to create the largest sample yet of the faintest and earliest known galaxies in our universe. A technique called gravitational lensing revealed these galaxies, which existed at a time when our universe was very young. A Hubble website said this week (October 22, 2015) that some of these galaxies formed just 600 million years after the Big Bang.

The 250 faint galaxies revealed in this study are fainter than any other galaxies yet uncovered by Hubble. An international team of astronomers, led by Hakim Atek of the Ecole Polytechnique Fédérale de Lausanne, Switzerland, conducted the study, which is part of the Hubble Frontier Fields program.

To make these discoveries, the team utilized three galaxy clusters, pictured on this page. They used the strong gravity of the clusters – with a technique called gravitational lensing – to peer behind the galaxy clusters, to a more distant region of space, at the farthest and faintest galaxies.

In other words, the galaxy clusters are extremely massive. They generate immense gravitational fields capable of magnifying the light from the faint galaxies that lie far behind the clusters themselves.

This makes it possible to search for, and study, the first generation of galaxies in the universe.

Clusters in the Frontier Fields act as powerful natural telescopes and unveil these faint dwarf galaxies that would otherwise be invisible. 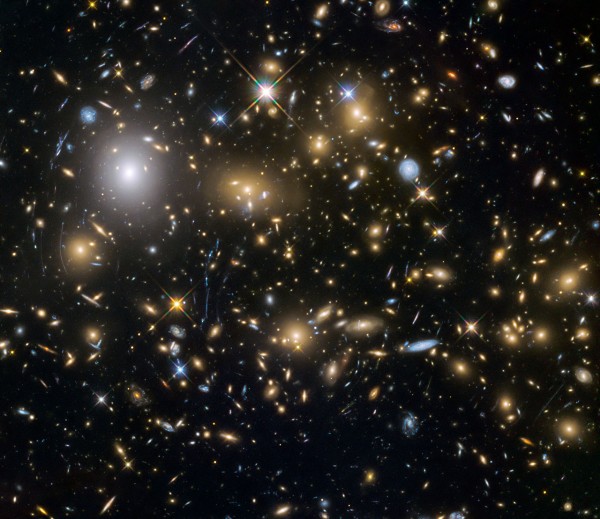 View larger. | The galaxy cluster MACSJ0717.5+3745. It is one of the most massive galaxy clusters known, and it is also the largest known gravitational lens. It’s another one of the six being studied by the Hubble Frontier Fields program.

The team said these small galaxies were vital to creating the universe that we see around us today. The Hubble site said:

By looking at the light coming from the galaxies the team discovered that the accumulated light emitted by these galaxies could have played a major role in one of the most mysterious periods of the Universe’s early history — the epoch of reionization.

Reionization started when the thick fog of hydrogen gas that cloaked the early universe began to clear. Ultraviolet light was now able to travel over larger distances without being blocked and the universe became transparent to ultraviolet light.

By observing the ultraviolet light from the galaxies found in this study the astronomers were able to calculate whether these were in fact some of the galaxies involved in the process.

The team determined, for the first time with some confidence, that the smallest and most abundant of the galaxies in the study could be the major actors in keeping the universe transparent.

By doing so, they have established that the epoch of reionization — which ends at the point when the universe is fully transparent — came to a close about 700 million years after the Big Bang. 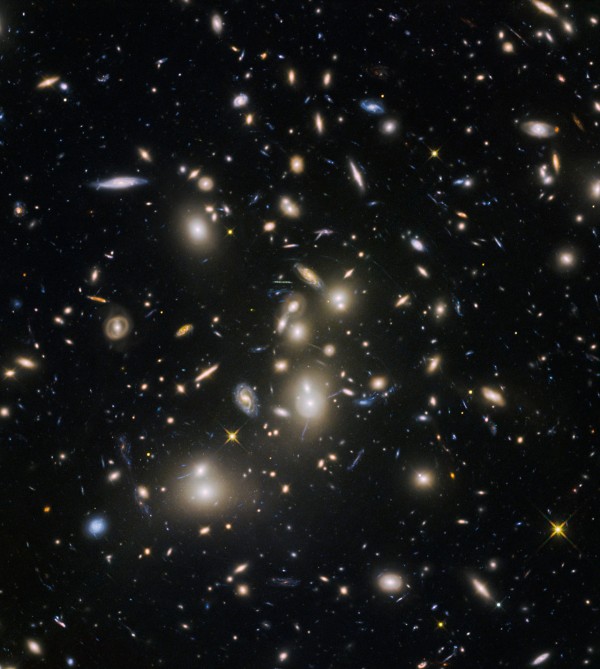 View larger. | Abell 2744, nicknamed Pandora’s Cluster, was one of the first of targets within the Frontier Fields program. The cluster is thought to have a very violent history, having formed from a cosmic pile-up of multiple galaxy clusters. Image via NASA, ESA and the HST Frontier Fields team (STScI).

Bottom line: The Hubble Frontier Fields program uses the powerful gravity of galaxy clusters to probe the faintest and most distant galaxies in the universe. Now, the largest sample yet of these faintest and earliest known galaxies have been revealed by Hubble. Some formed just 600 million years after the Big Bang.