On April 17, 2021, the New Horizons spacecraft passed 50 astronomical units – 50 times Earth’s distance from the sun – while speeding toward interstellar space. It also captured an image of another earthly spacecraft, even farther out. 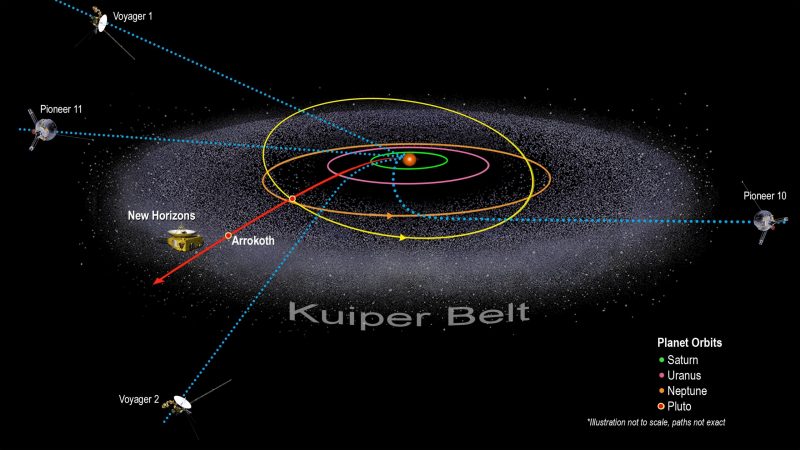 View larger. | This diagram illustrates the 5 missions that have gone farther than 50 astronomical units (AU) from the sun. An AU is about the distance between the Earth and sun. New Horizons reached this milestone on April 17, 2021, after exploring Pluto and another distant object called Arrokoth. Image via NASA/ Johns Hopkins APL/ Southwest Research Institute.

Until recently, only four spacecraft had journeyed as far into space as 50 astronomical units (AU), or 50 times Earth’s distance from the sun. On April 17, 2021, New Horizons became the fifth human-made object to reach this rare space milestone. The spacecraft broke the 50 AU mark on its trek out of the solar system, nearly six years after its successful sweep past Pluto in July 2015. NASA described the current distance of New Horizons from our sun in this way:

Here’s one way to imagine just how far 50 AU is: Think of the solar system laid out on a neighborhood street; the sun is one house to the left of ‘home’ (or Earth), Mars would be the next house to the right, and Jupiter would be just four houses to the right. New Horizons would be 50 houses down the street, 17 houses beyond Pluto!

In other words, it’s far away. Why? Because space is vast!

Get an idea of how vast by visiting the interactive diagram of solar system distances at If the Moon Were Only 1 Pixel.

Pioneer 10, Pioneer 11, Voyager 1 and Voyager 2 are the only other spacecraft that have traveled farther than 50 AU from our sun. This distance equals about 5 billion miles (7.5 billion km). When scientists on Earth send a command to New Horizons, it requires seven hours to reach the distant spacecraft, traveling at the speed of light (186,000 miles per second, or about 300,000 km per second). Then the scientists must wait another seven hours to know if the message was received.

One message the scientists sent to New Horizons, in late 2020, was a request to photograph one of its predecessors. On Christmas Day 2020, New Horizons pointed its camera in the direction of Voyager 1, the first spacecraft to cross the 50 AU mark. The remarkable image, seen below, does not capture the figure of Voyager 1 itself, of course. Voyager 1 is 11.2 billion miles (18 billion kilometers) farther away than New Horizons, but it is the first image taken by a spacecraft in the Kuiper Belt of a more distant spacecraft. Voyager 1 is now an amazing 152 AU from the sun and has officially left the bounds of the solar system as it journeys through interstellar space. New Horizons will reach our solar system’s “border” and cross into interstellar space in the 2040s, as it flies outward into territory no longer dominated by our sun. 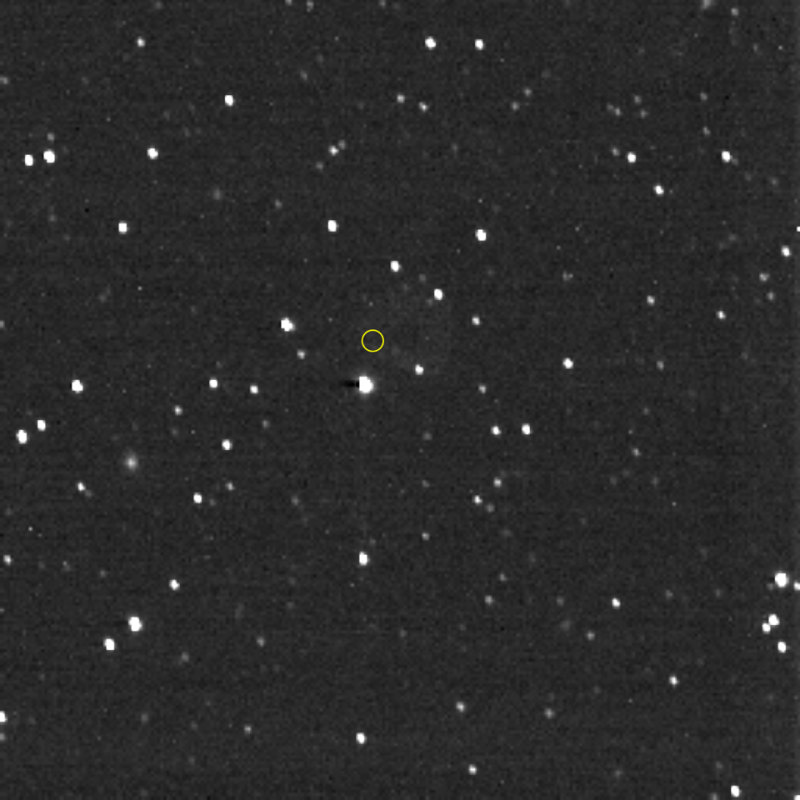 You need imagination for this image. In the yellow circle is a very distant spacecraft, Voyager 1, launched from Earth in 1977 and now 152 AU from the sun. New Horizons was launched in 2006 and is now at 50 AU. Last December 25, New Horizons pointed its camera toward Voyager 1’s location in the sky. Voyager 1 was the 1st spacecraft to leave our solar system and is the farthest human-made object from Earth. New Horizons is currently the 5th-farthest object. Image via NASA/ Johns Hopkins APL/ SwRI.

That’s a hauntingly beautiful image to me. Looking back at the flight of New Horizons from Earth to 50 AU almost seems in some way like a dream. Flying a spacecraft across our entire solar system to explore Pluto and the Kuiper Belt had never been done before New Horizons. Most of us on the team have been a part of this mission since it was just an idea, and during that time our kids have grown up, and our parents, and we ourselves, have grown older. But most importantly, we made many scientific discoveries, inspired countless STEM careers, and even made a little history. 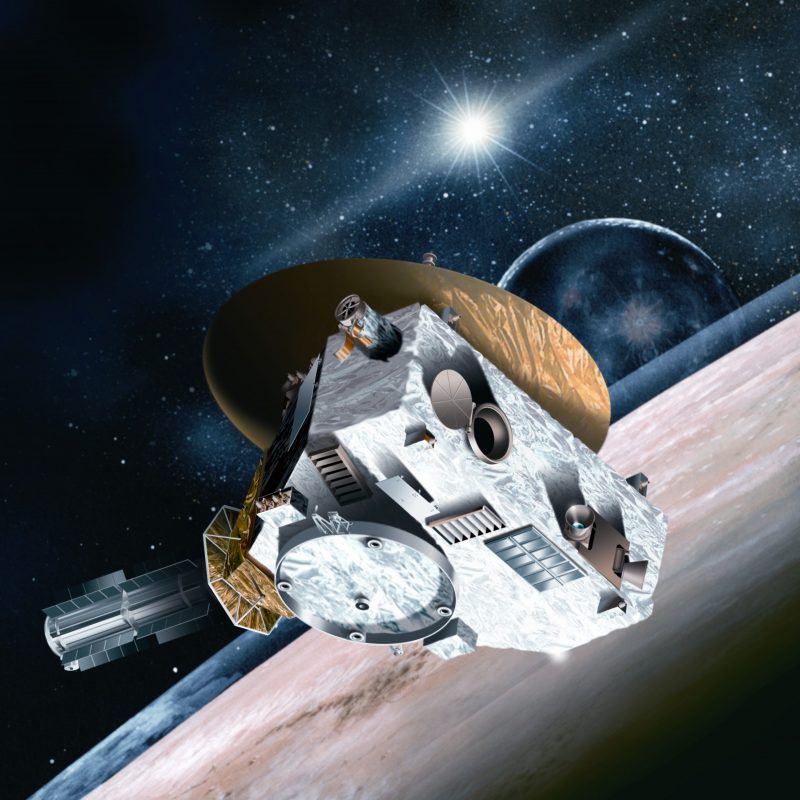 Artist’s concept of the New Horizons spacecraft as it journeys past Pluto. Image via NASA.

While New Horizons won’t exactly catch up to and meet Voyager 1 (they’re not even traveling in the same direction), it is the fastest human-made object ever launched from Earth. New Horizons got an additional boost with a gravity-assist flyby of Jupiter in February 2007. While it was at Jupiter, it took the best views ever of Jupiter’s faint ring and captured the first movie of a volcano erupting beyond Earth.

After its enormously successful exploration of Pluto, delivering amazing photos that changed the way we view the petite world, it continued traveling outward, giving us the first close-up look at a Kuiper Belt object, Arrokoth, in 2019. 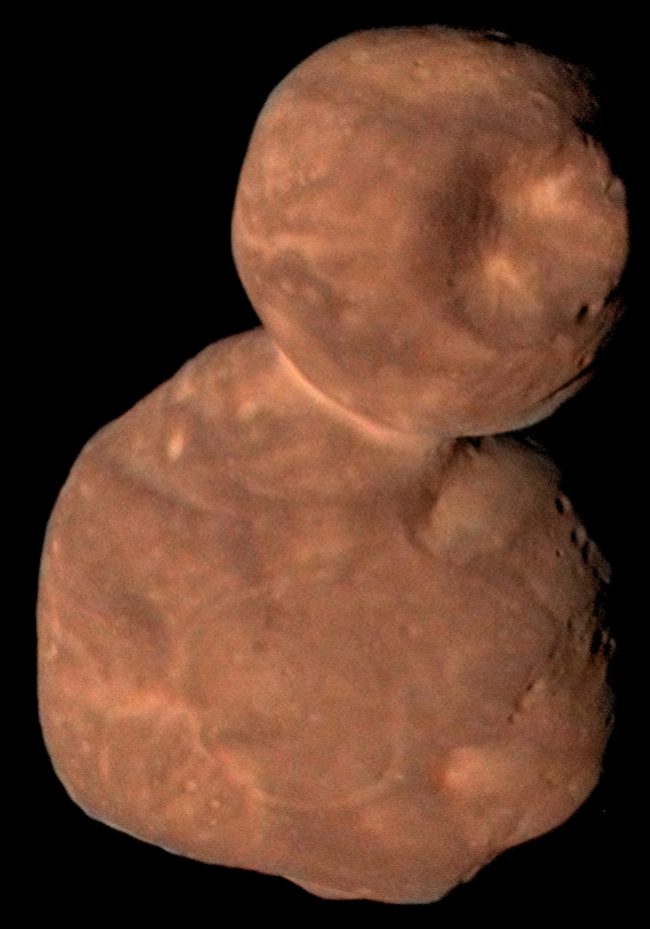 But New Horizons may not be done yet. It has enough power in its nuclear battery to continue operating until the late 2030s. It just needs a new object to target.

Yes if we can find one within fuel reach. Searching…

Until next time, New Horizons …

Bottom line: NASA’s New Horizons spacecraft has now officially crossed the mark of 50 astronomical units from the sun as it speeds toward interstellar space. The spacecraft took an image of its predecessor in a first-of-its-kind photo.