The legendary craft that flew past Pluto in 2015 is still heading outward. New Horizons will sweep past its next target, nicknamed Ultima Thule, on New Year’s Day, 2019. 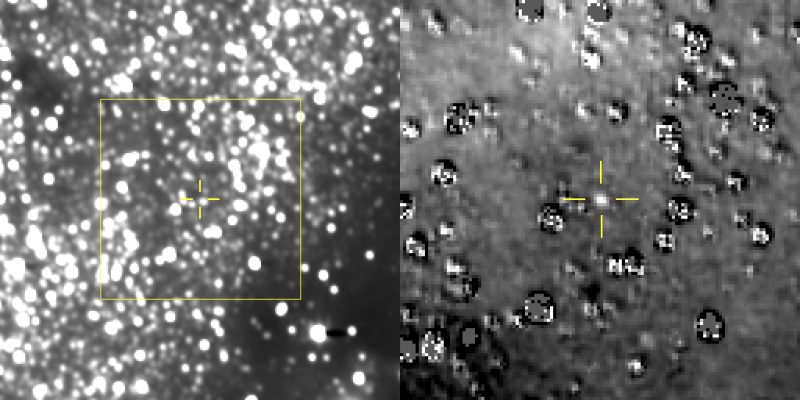 There are 2 highly processed images here, acquired by New Horizons on August 16, 2018. At left, a composite, produced by adding together 48 different exposures, each with an exposure time of 29.967 seconds. The predicted position of the Kuiper Belt object nicknamed Ultima Thule is indicated by the yellow crosshairs. At right, a magnified view of the region in the yellow box, after subtraction of background stars. There it is! Image via NASA/Johns Hopkins University/Southwest Research Institute.

The New Horizons spacecraft will remain forever in our hearts as the craft that provided our first glimpses of tiny Pluto and its system of moons in 2015. Now New Horizons is headed toward its next target, a Kuiper Belt Object (KBO) called 2014 MU69, nicknamed Ultima Thule. New Horizons is moving fast. But space is vast, and distances in the outer solar system are great. So the New Horizons team was reassured earlier this month when the craft returned its first images of Ultima, showing the little KBO is very close to where scientists predicted it would be.

That’s good! It means New Horizons is being targeted in the right direction.

And so New Horizons will continue on its course toward this object, due to make its closest encounter on New Year’s Day, 2019.

Just how fast is New Horizons, by the way? At its launch on January 19, 2006, it was said to be the fastest spacecraft ever to leave Earth orbit. Since then, other craft have been determined to be faster. For example, the Parker Solar Probe, which launched earlier this month (August 12, 2018) is faster. Still, New Horizons is very fast, about 100 times faster than an earthly jet The tweet below, from 2015, is a great illustration.

And now New Horizons has its first images of its next target, Ultima Thule, an object that had not been discovered yet when this craft was launched. The set of 48 images were transmitted home through NASA’s Deep Space Network.

NASA said the New Horizons team was thrilled – if not a little surprised – that New Horizons’ telescopic Long Range Reconnaissance Imager (LORRI) was able to see the small, dim object while still more than 100 million miles (160 million km) away, and against a dense background of stars. Hal Weaver, New Horizons project scientist, said in a statement:

The image field is extremely rich with background stars, which makes it difficult to detect faint objects. It really is like finding a needle in a haystack. In these first images, Ultima appears only as a bump on the side of a background star that’s roughly 17 times brighter, but Ultima will be getting brighter – and easier to see – as the spacecraft gets closer.

This first detection is important, NASA said, because the observations New Horizons makes of Ultima over the next four months will help the mission team refine the spacecraft’s course toward a closest approach to Ultima, at 12:33 a.m. EST on January 1, 2019. 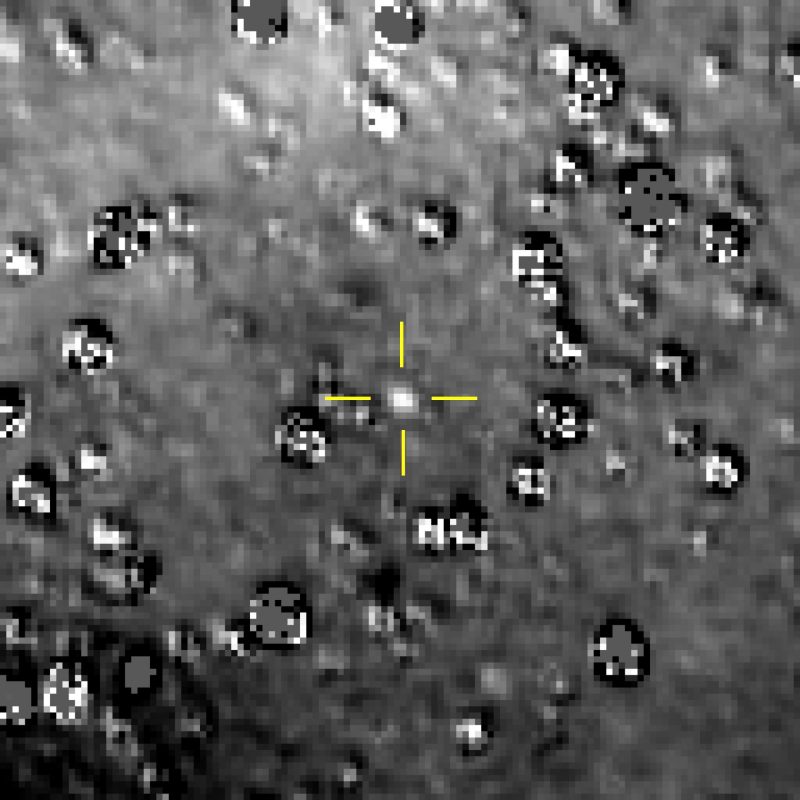 Ultima is clearly detected in this image, very close to where scientists predicted, indicating to the team that New Horizons is being targeted in the right direction. At the time of this observation, Ultima Thule was 107 million miles (172 million km) from the New Horizons spacecraft and 4 billion miles (6.5 billion km) from our sun. Image via NASA/Johns Hopkins University/Southwest Research Institute.