New Horizon spacecraft wakes up for encounter with Pluto system

It’s awake! On Saturday, the New Horizons spacecraft came out of hibernation, at the doorstep of Pluto. 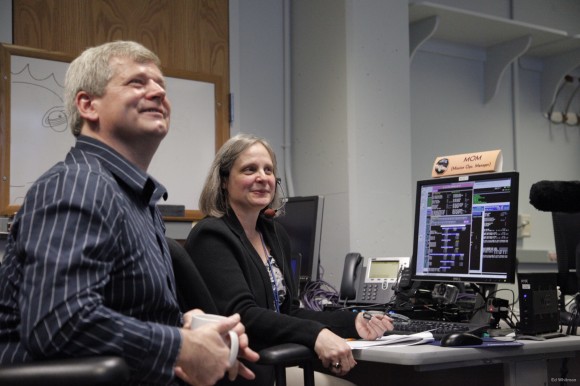 On Saturday (December 6, 2014) NASA’s New Horizons spacecraft came out of hibernation for its long-awaited 2015 encounter with the Pluto system. New Horizons has been traveling nearly nine years – a voyage of three billion miles. That’s the farthest any space mission has ever traveled to reach its primary target.

This is a watershed event that signals the end of New Horizons crossing of a vast ocean of space to the very frontier of our solar system, and the beginning of the mission’s primary objective: the exploration of Pluto and its many moons in 2015.

Since launching on January 19, 2006, New Horizons has spent 1,873 days — about two-thirds of its flight time — in hibernation. Its 18 separate hibernation periods, from mid-2007 to late 2014, ranged from 36 days to 202 days in length. The team used hibernation to save wear and tear on spacecraft components and reduce the risk of system failures.

Technically, this was routine, since the wake-up was a procedure that we’d done many times before. “Symbolically, however, this is a big deal. It means the start of our pre-encounter operations.

The wake-up sequence had been programmed into New Horizons’ onboard computer in August, and started aboard the spacecraft at 3 p.m. EST on December 6. About 90 minutes later, New Horizons began transmitting word to Earth on its condition, including the report that it is back in “active” mode.

The New Horizons team will spend the next several weeks checking out the spacecraft, making sure its systems and science instruments are operating properly. They’ll also continue to build and test the computer-command sequences that will guide New Horizons through its flight to and reconnaissance of the Pluto system.

New Horizons’ closest approach to Pluto will occur on July 14 of next year, but plenty of highlights are expected before then, including, by mid-May, views of the Pluto system better than what the mighty Hubble Space Telescope can provide of the dwarf planet and its moons. New Horizons Project Scientist Hal Weaver said:

New Horizons is on a journey to a new class of planets we’ve never seen, in a place we’ve never been before. For decades we thought Pluto was this odd little body on the planetary outskirts; now we know it’s really a gateway to an entire region of new worlds in the Kuiper Belt, and New Horizons is going to provide the first close-up look at them.

Bottom line: NASA’s New Horizons spacecraft came out of hibernation on December 6, 2014 for its long-awaited 2015 encounter with the Pluto system.