Best view yet inside Mars

Scientists have used fluctuations in the orbits of 3 spacecraft to map Mars’ gravity. Thanks to this gravity map, it now seems likely that Mars has a molten core.

Scientists at NASA’s Goddard Spaceflight Center have used three spacecraft orbiting Mars to create a new map of Mars’ gravity. It’s the most detailed such map to date, they said in a March 21, 2016, statement. Using this new gravity map, the scientists have been able to peer into Mars’ interior and gain insights about the planet.

How did they do it? The video above explains more, but the basic idea is that satellites always orbit a planet’s center of mass. They can be pulled slightly off course by the gravity of massive features such as Olympus Mons, an ancient shield volcano and the solar system’s tallest mountain.

Using these slight orbital fluctuations, scientists were able to to map the gravity field of Mars.

The new map has shown there must be molten material at the core of Mars, an idea which suspected for some time.

It also provides fresh insights into the thickness of Mars’ crust. The average thickness is about 30 miles (50 km), but the scientists are interested in the variations in thickness, which can range up as high as about 80 miles (125 km)

The map has provided data on the seasonal variations of dry ice at Mars’ poles.

And it’ll help put future spacecraft into orbit more precisely, which will enhance our ability to study the Red Planet by this means. 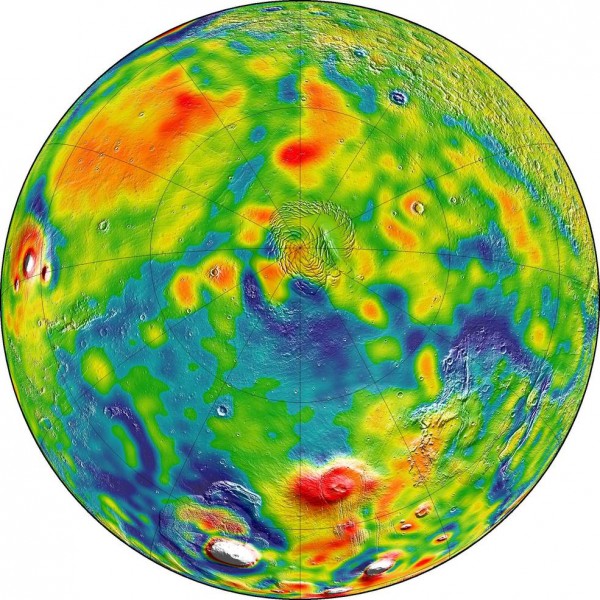 A map of Mars’ gravity looking down on the planet’s north pole (center). White and red are areas of higher gravity; blue indicates areas of lower gravity. Image via MIT/UMBC-CRESST/GSFC

Bottom line: Just as a doctor uses X-rays to peer inside a patient, so scientists use gravity maps to look inside planets. A new map of Mars’ gravity made with three NASA spacecraft is the most detailed to date. Among other things, it shows that Mars must have a molten core.