The object labeled RR245 is traveling toward its closest approach to our sun. It’ll reach this (very distant) closest point – 3 billion miles, or 5 billion km – around 2096. 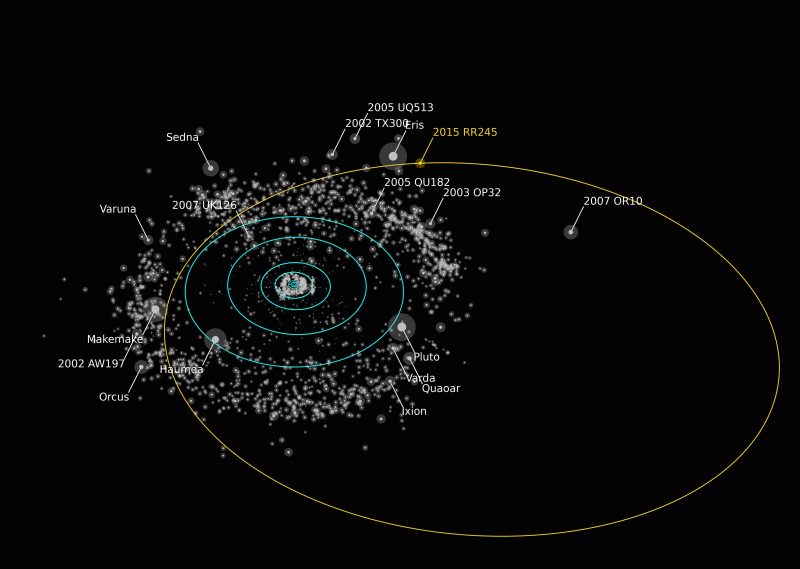 View larger. | Illustration of the orbit of the new dwarf planet, RR245 (orange line). Objects as bright or brighter than RR245 are labeled. Image via Alex Parker OSSOS team.

Astronomers using the the Canada-France-Hawaii Telescope on the dormant Mauna Kea volcano in Hawaii announced on July 11, 2016 that they’ve discovered a new dwarf planet orbiting beyond Neptune. The international team of astronomers said the new object is roughly 435 miles (700 km) in size and has one of the largest orbits known for a dwarf planet. The Minor Planet Center described the object as the 18th largest in the Kuiper Belt and has designated it as 2015 RR245.

A dwarf planet is defined as an object in our solar system with a mass in the range of planets or moons, at least massive enough for the object’s self-gravity to have crushed it into a ball shape. Unlike moons, dwarf planets are in direct orbit around our sun. Unlike the major planets of our solar system, dwarf planets have not cleared their neighborhoods of the debris in their own orbits, according to the 2006 IAU definition of planets, the same definition that caused Pluto to lose its major planet status.

Astronomer Michele Bannister of the University of Victoria in British Columbia – a postdoctoral fellow with OSSOS – said of the newly discovered dwarf planet:

The icy worlds beyond Neptune trace how the giant planets formed and then moved out from the sun. They let us piece together the history of our solar system. But almost all of these icy worlds are painfully small and faint: it’s really exciting to find one that’s large and bright enough that we can study it in detail.

How large is it? The size of RR245 is not yet exactly known, because astronomers aren’t sure yet what lies on its surface. Bannister said:

It’s either small and shiny, or large and dull.

Discovery images of RR245 show its slow motion across sky over 3 hours. Image via OSSOS.

There it was on the screen — this dot of light moving so slowly that it had to be at least twice as far as Neptune from the sun.

The astronomers’ statement said the team became even more excited when they realized that the orbit of RR245 takes it more than 120 times farther from the sun than Earth.

They said that – after being more than 8 billion miles (12 billion km) from the sun for hundreds of years – RR245 is now traveling toward its closest approach at 3 billion miles (5 billion km). It’ll reach this (extremely distant) closest point around 2096.

RR245 has been observed for only one of the 700 years it takes to orbit the sun. Where it came from, and how its orbit will slowly evolve in the far future, is still unknown. As astronomers observe it longer, they’ll be able to define its orbit more precisely. Eventually, they’ll give the object a real name.

The New Horizons spacecraft – which visited dwarf planet Pluto last July – showed that these little worlds so far from the sun have exotic geology, pointed out these astronomers. No spacecraft is headed toward RR245, nor is one likely to be in our lifetimes.

But – now that they know it’s there – astronomers will be watching it.