Astronomers discovered asteroid 2016 VA on November 1, 2016, just hours before it passed within 0.2 times the moon’s distance of Earth. Images here. 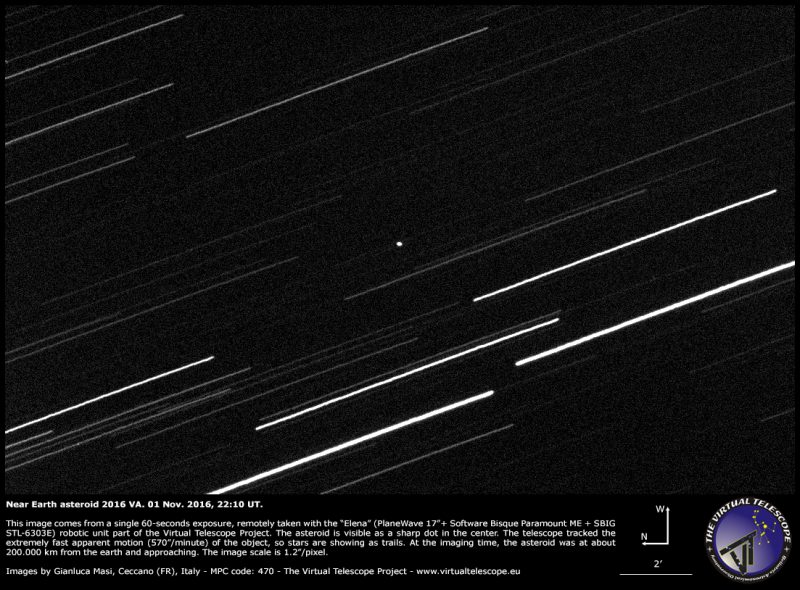 Story and images by Gianluca Masi of the Virtual Telescope Project. Used with permission.

The near-Earth asteroid 2016 VA was discovered by the Mt. Lemmon Sky Survey in Arizona (USA) on 1 Nov. 2016 and announced later the same day by the Minor Planet Center. The object was going to have a very close encounter with the Earth, at 0.2 times the moon’s distance – about 75,000 km [46,000 miles]. At Virtual Telescope Project we grabbed extremely spectacular images and a unique video showing the asteroid eclipsed by the Earth.

The image above is a 60-seconds exposure, remotely taken with “Elena” (PlaneWave 17?+Paramount ME+SBIG STL-6303E robotic unit) available at Virtual Telescope. The robotic mount tracked the extremely fast (570″/minute) apparent motion of the asteroid, so stars are trailing. The asteroid is perfectly tracked: it is the sharp dot in the center, marked with two white segments. At the imaging time, asteroid 2016 VA was at about 200,000 km [124,000 miles] from us and approaching. Its diameter should be around 12 meters or so.

During its fly-by, asteroid 2016 VA was also eclipsed by the Earth’s shadow. We covered the spectacular event, clearly capturing also the penumbra effects.

The movie below is an amazing document showing the eclipse. Each frame comes from a 5-seconds integration.

The eclipse started around 23:23:56 UT and ended about at 23:34:46. To our knowledge, this is the first video ever of a complete eclipse of an asteroid. Some hot pixels are visible on the image. At the eclipse time, the asteroid was moving with an apparent motion of 1500″/minutes and it was at about 120,000 km [75,000 miles] from the Earth, on its approaching route. You can see here a simulation of the eclipse as if you were on the asteroid.

Click here to see this article at the Virtual Telescope Project

Bottom line: An asteroid called 2016 VA was discovered on November 1, 2016 and passed closest to Earth – within 0.2 times the moon’s distance – a few hours later. Gianluca Masi of the Virtual Telescope Project caught images of the asteroid as it swept by.