NASA’s Solar Dynamics Observatory sees dozens of Earth eclipses and several lunar transits each year. On September 13, 2015, it saw the two happening at once. 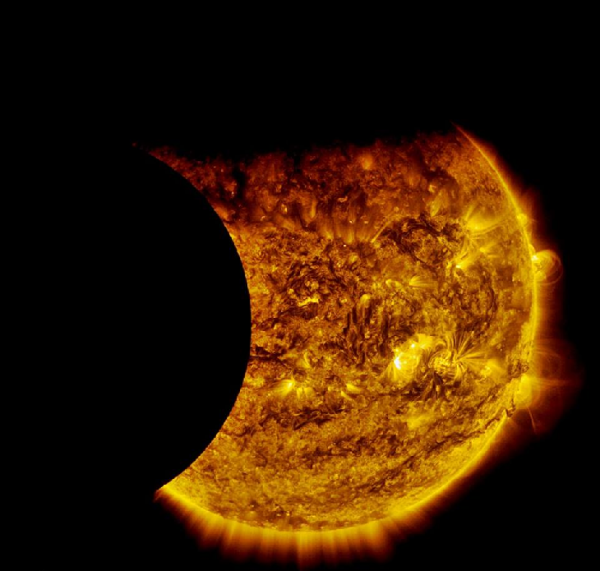 NASA’s Solar Dynamics Observatory captured this image of Earth and the moon transiting the sun together on September 13, 2015. The edge of Earth is near the top of the frame. The moon’s edge – crisp, because it has no atmosphere – is on the left. Image via NASA/SDO

This past Sunday (September 13, 2015) was a partial eclipse of the sun as seen from parts of South Africa and Antarctica. At the same time, NASA’s Solar Dynamics Observatory (SDO) – a satellite in geosynchronous orbit around Earth – caught a rare double eclipse of the sun, first by Earth and then by the moon. NASA said that SDO sees dozens of Earth eclipses and several lunar transits each year from its vantage point in space. This is the first time it has seen two happening at once! NASA explained:

Just as the moon came into SDO’s field of view on a path to cross the sun, Earth entered the picture, blocking SDO’s view completely. When SDO’s orbit finally emerged from behind Earth, the moon was just completing its journey across the sun’s face.

The double eclipse began around 06:30 UTC on September 13.

SDO captured the image above in extreme ultraviolet wavelengths (171 angstroms). Those wavelenths typically are colorized in gold, which account for the gold color of the sun in the image. The edge of Earth visible near the top of the frame appears fuzzy, NASA said, because Earth’s atmosphere blocks different amounts of light at different altitudes. On the left, the moon’s edge is perfectly crisp, because the moon doesn’t have an atmosphere.

The video below has more:

SDO has been observing the sun since 2010. It’s in a circular, geosynchronous orbit at an altitude of 22,238 miles (35,789 kilometers) above Earth. That precise distance above Earth allows SDO to make one complete path around our planet every 24 hours. It means SDO stays in one spot in our sky. More importantly, SDO’s orbit gives it an unobstructed view of the sun, usually.

But SDO has eclipse seasons twice each year. As NASA explained:

… Earth’s revolution around the sun means that SDO’s orbit passes behind Earth twice each year, for two to three weeks at a time.

During these phases, Earth blocks SDO’s view of the sun for anywhere from a few minutes to over an hour once each day.

Meanwhile, back on Earth on September 13, people in South Africa and parts of Antarctica were seeing a partial eclipse of the sun. That is, the moon was passing in front of the sun, clipping one edge of it, as shown in the photo below from an EarthSky community member. 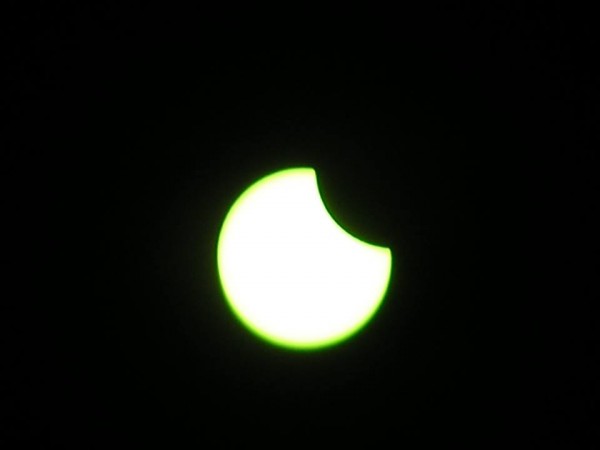 Partial eclipse of the sun by the moon – September 13, 2015 – captured by EarthSky Facebook friend Charl Strydom at Dullstroom, Mpumalanga, South Africa. Thanks for posting, Charl!

Bottom line: NASA’s Solar Dynamics Observatory sees dozens of Earth eclipses and several lunar transits each year. On Sunday – September 13, 2015 – it saw the two happening at once for the first time ever.