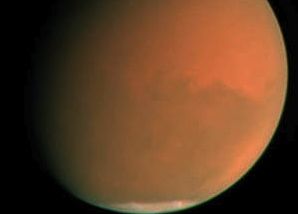 These images of mars released by NASA 11 October, 2001 show the planet in natural color, as captured by NASA’s Hubble Space Telescope Wide Field Planetary Camera 2. The two dramatically different faces of the Red Planet appear in these comparison images showing how a global dust storm engulfed Mars with the onset of Martian spring in the Southern Hemisphere. When NASA’s Hubble Space Telescope imaged Mars in June(L), the seeds of the storm were caught brewing in the giant Hellas Basin (oval at 4 o’clock position on disk) and in another storm at the northern polar cap. When Hubble photographed Mars in early September(R), the storm had already been raging across the planet for nearly two months obscuring all surface features. AFP PHOTO/ NASA

Thank you! Your submission has been received!
Oops! Something went wrong while submitting the form.
END_OF_DOCUMENT_TOKEN_TO_BE_REPLACED