No global dust storm for Mars this year?

On November 10, a major dust storm broke out in Mars’ southern hemisphere. By early December 2012, the storm was dying down.

NASA began observing a dust storm on the planet Mars on November 10, 2012. Martian dust storms are the largest such storms in our solar system. Over the century that astronomers have monitored them through telescopes – and now via spacecraft – these periodic storms have been know to rage for months and grow to cover the entire planet Mars. This one, however, appeared to be dissipating by early December, 2012.

Dust storms on Mars sometimes start in the months before Mars is closest to the sun, as it soon will be. Mars will reach perihelion – its closest point to the sun – in January 2013. Each Martian year lasts about two Earth years. Regional dust storms expanded and affected vast areas of Mars in 2001 and 2007, but not between those years and not since 2007. 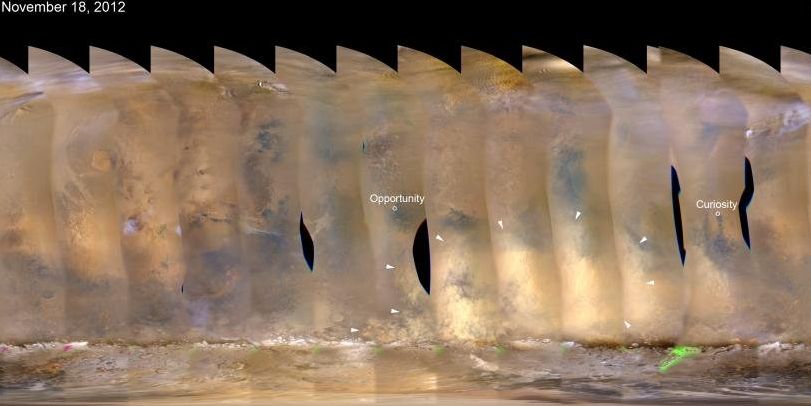 The image above is a mosaic taken by a spacecraft in orbit around Mars, the wonderful Mars Reconnaissance Orbiter, on November 18, 2012. Small white arrows outline the area in Mars’ southern hemisphere where the 2012 Martian dust storm was building. The storm was not far from two Mars rovers, Opportunity and Curiosity.

This is now a regional dust storm. It has covered a fairly extensive region with its dust haze, and it is in a part of the planet where some regional storms in the past have grown into global dust hazes. For the first time since the Viking missions of the 1970s, we are studying a regional dust storm both from orbit and with a weather station on the surface. 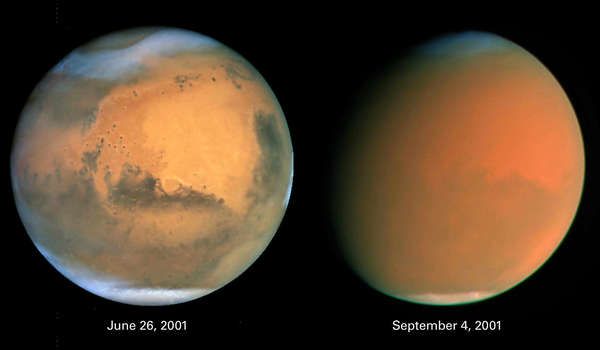 Here is a comparison of Mars before and during a dust storm that took place in 2001. Dust storms on Mars can rage for months and grow to cover the entire planet. Image via NASA’s Hubble Space Telescope Wide Field Planetary Camera 2.

That weather station on Mars comes from the Mars rover Curiosity, which landed on Mars on August 5, 2012. NASA says Curiosity’s weather station detected atmospheric changes related to the storm. For example, its sensors measured decreased air pressure and a slight rise in overnight low temperature. In fact, dust storms on Mars are known to raise the air temperature of the planet, sometimes globally.

The Opportunity rover on Mars – that stalwart vehicle that has been tooling around on the Red Planet since 2004 and is now near the Endeavour crater on Mars – does not have a weather station. Opporunity was within 837 miles (1,347 kilometers) of the storm on November 21, NASA said, and did observe a slight drop in atmospheric clarity from its location. If the storm had taken over the entire planet and clouded over the sky, it would have impacted Opportunity most heavily, because that rover relies on the sun for energy. The rover’s energy supply would be disrupted if dust from the air fell on its solar panels.

Meanwhile, the car-sized Curiosity rover would fare better since it is powered by plutonium instead of solar cells.

By early December 2012, the dust storm on Mars appeared to be dissipating. See area within white arrows. No global storm for Mars this year? Image via NASA/JPL-Caltech/MSSS. Larger image and caption here.

Curiosity and the Mars Reconnaissance Orbiter are working together to provide a weekly Mars weather report from the orbiter’s Mars Color Imager, which you can see here.

Read more from NASA about the dust storm on Mars

Bottom line: As Mars nears its perihelion or closest point to the sun in January 2013, a major dust storm broke out in the planet’s southern hemisphere, where summer is coming. NASA is tracking the storm with both the Curiosity and Opportunity rovers on the Martian surface, and from above with the Mars Reconnaissance Orbiter. These dust storms on Mars sometimes rage for months and cover the entire planet. This one seems to have died down suddenly.