NASA has called off the planned March 2016 launch of the InSight mission to Mars, following failure to repair a leaky instrument in the science payload. 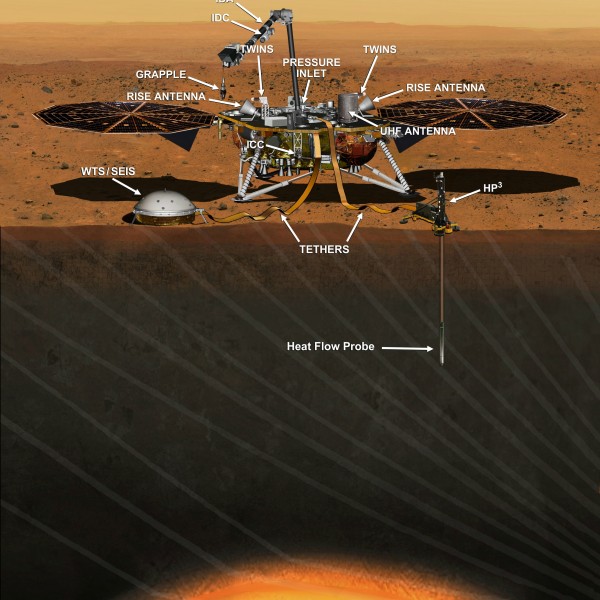 This artist’s concept from August 2015 depicts NASA’s InSight Mars lander fully deployed for studying the deep interior of Mars. The mission will launch during the period March 4 to March 30, 2016, and land on Mars Sept. 28, 2016. Image credit: NASA/JPL-Caltech

In a statement issued yesterday (December 22, 2015) NASA announced that it has called off the planned March 2016 launch of the InSight mission to Mars. The decision follows unsuccessful attempts to repair a leak in a section of the prime instrument in the science payload.

The unmanned InSight (Interior Exploration using Seismic Investigations Geodesy and Heat Transport) lander is designed to study the deep interior of Mars to increase understanding of how all rocky planets, including Earth, formed and evolved.

The relative positions of the planets are most favorable for launching missions from Earth to Mars for only a few weeks every 26 months. For InSight, that 2016 launch window existed from March 4 to March 30.

We push the boundaries of space technology with our missions to enable science, but space exploration is unforgiving, and the bottom line is that we’re not ready to launch in the 2016 window. A decision on a path forward will be made in the coming months, but one thing is clear: NASA remains fully committed to the scientific discovery and exploration of Mars.

The instrument involved is a seismometer designed to measure ground movements as small as the diameter of an atom. The instrument requires a vacuum seal around its three main sensors to withstand the harsh conditions of the Martian environment.

A leak that previously had prevented the seismometer from retaining vacuum conditions was repaired, and the mission team was hopeful the most recent fix also would be successful. However, during testing on Monday in extreme cold temperature (-49 degrees Fahrenheit/-45 degrees Celsius) the instrument again failed to hold a vacuum.

NASA officials determined there is insufficient time to resolve another leak, and complete the work and thorough testing required to ensure a successful mission.

In 2008, we made a difficult, but correct decision to postpone the launch of the Mars Science Laboratory mission for two years to better ensure mission success,” said “The successes of that mission’s rover, Curiosity, have vastly outweighed any disappointment about that delay.

The spacecraft was delivered to Vandenberg Air Force Base in California, on December 16, 2015. With the 2016 launch canceled, the spacecraft will be returned from Vandenberg to Lockheed’s facility in Denver.

Bottom line: On December 22, 2015 NASA announced that it has called off the planned March 2016 launch of the InSight mission to Mars. The decision follows unsuccessful attempts to repair a leak in a section of the prime instrument in the science payload.