NASA studies plan to send an orbiter to Pluto

Remember when New Horizons swept past Pluto in 2015? That was exciting! Who knew Pluto had a heart? Now scientists are proposing a new Pluto orbiter mission. It would gather details on Pluto’s heart and the rest of its youthful surface, its hazy bluish nitrogen atmosphere, and its system of 5 known moons. 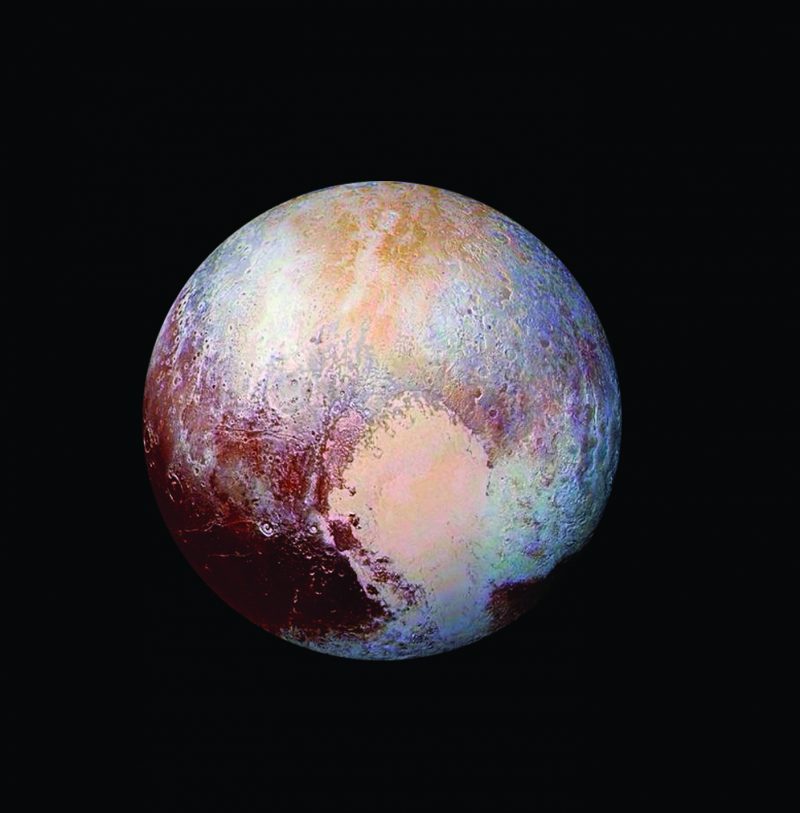 False-color view of Pluto, as seen by New Horizons in 2015. Image via NASA/JHUAPL/SwRI.

New Horizons‘ flyby of Pluto in July 2015 was one of the most exciting events in planetary exploration. We finally got to see this distant world and its moons close-up for the first time in history. Unfortunately, however, it was only a quick flyby. Since then, there has been a lot of talk of a return mission to Pluto. And now, just such a mission may be on the drawing boards. NASA is now exploring the possibility of sending a spacecraft back to Pluto, but this time to stay much longer, with an orbiter. The Southwest Research Institute (SwRI) has announced that it has been awarded funding by NASA to study attributes, feasibility and cost of such a mission.

This would certainly be exciting if the mission is approved. As of right now, it is one of 10 mission studies that NASA is sponsoring, in preparation for the next Planetary Science Decadal Survey. The results of these studies will be delivered to the National Academy Planetary Decadal Study in 2020. According to Carly Howett at SwRI, who is leading the study:

We’re excited to have this opportunity to inform the decadal survey deliberations with this study. Our mission concept is to send a single spacecraft to orbit Pluto for two Earth years before breaking away to visit at least one KBO [Kuiper Belt object] and one other KBO dwarf planet. 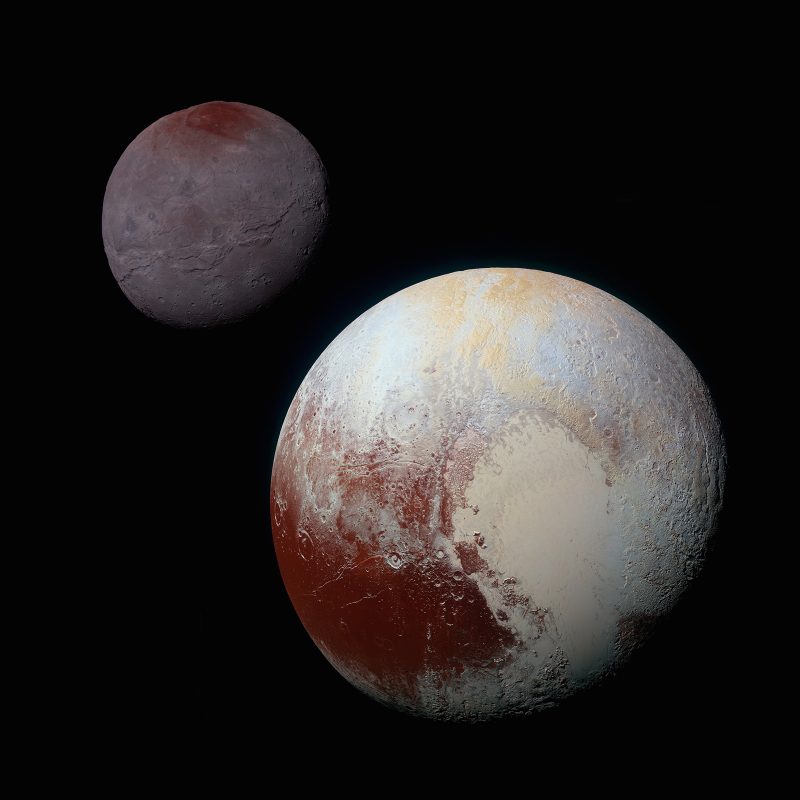 Pluto and its largest moon Charon, as seen by New Horizons on July 14, 2015. Image via NASA/JHUAPL/SwRI.

The study will develop the spacecraft and payload design requirements, as well as make preliminary cost and risk assessments for new technologies that will be required.

As Alan Stern, principal investigator of the New Horizons mission, also noted, an orbiter could orbit Pluto for a period of time, and then take off again to go deeper into the Kuiper Belt:

In an SwRI-funded study that preceded this new NASA-funded study, we developed a Pluto system orbital tour, showing the mission was possible with planned capability launch vehicles and existing electric propulsion systems. We also showed it is possible to use gravity assists from Pluto’s largest moon, Charon, to escape Pluto orbit and to go back into the Kuiper Belt for the exploration of more KBOs like MU69 and at least once more dwarf planet for comparison to Pluto.

Previously, NASA and the planetary science community thought the next step in Kuiper Belt exploration would be to choose between ‘going deep’ in the study of Pluto and its moons or ‘going broad’ by examining smaller Kuiper Belt objects and another dwarf planet for comparison to Pluto. The planetary science community debated which was the right next step. Our studies show you can do both in a single mission: it’s a game changer. 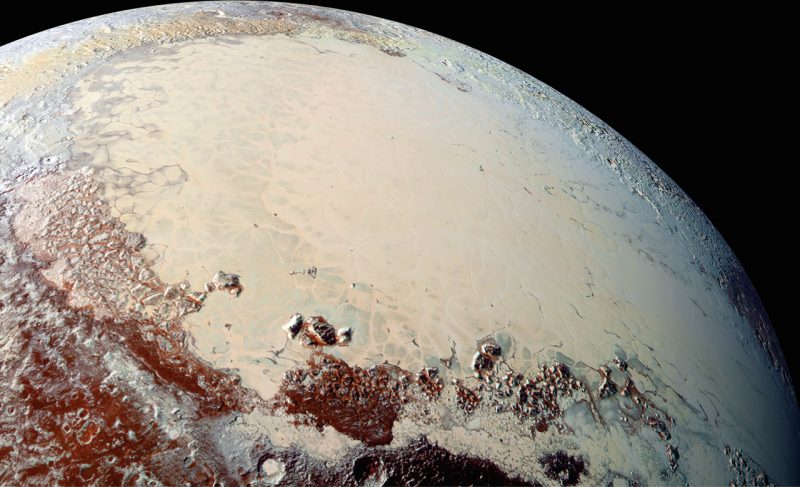 Sputnik Planitia is a vast plain of nitrogen ice on Pluto, surrounded by mountains of water ice. Image via Stern et al./NASA/JHUAPL/SwRI/Science. 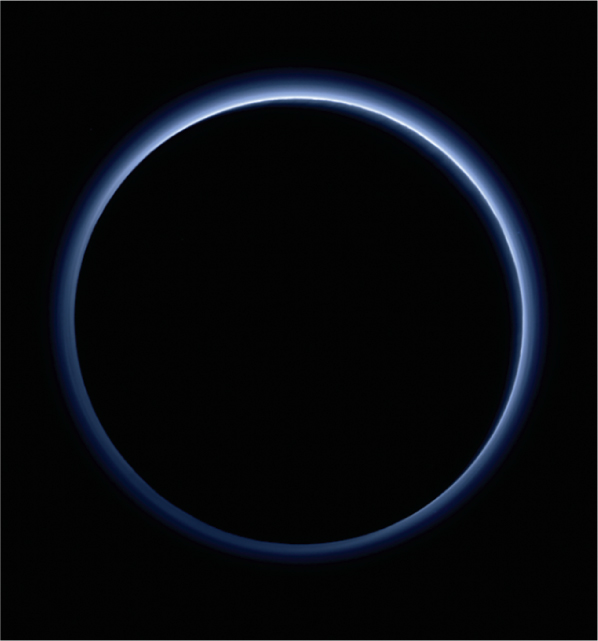 Stunning image of Pluto backlit by the sun, with its bluish hazy nitrogen atmosphere, as seen by New Horizons. Image via NASA/JHUAPL/SwRI/Science. 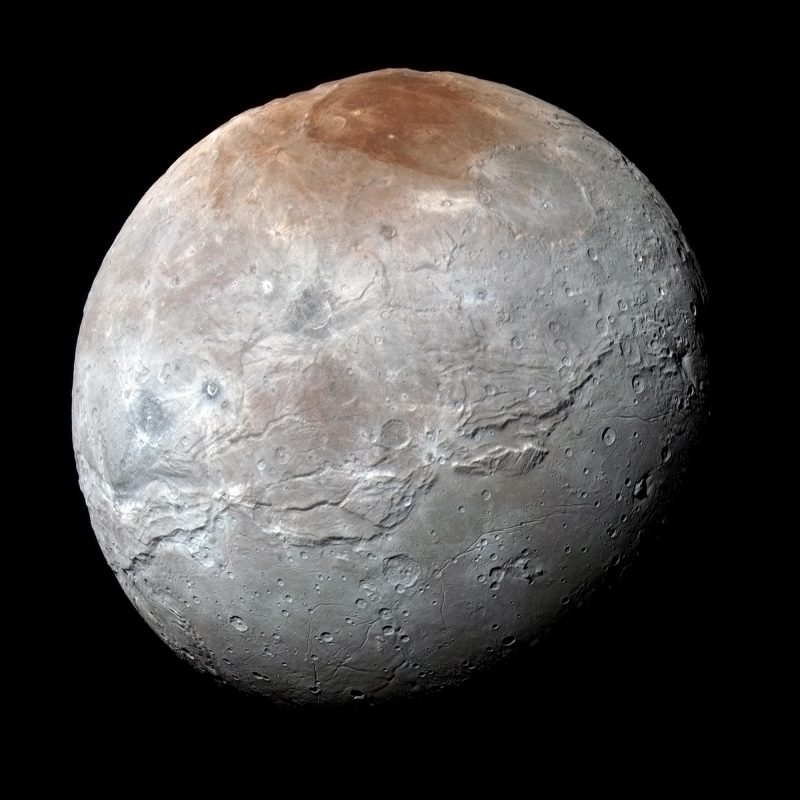 An orbiter would have some great advantages over the previous flyby mission. As well as having much more time, it could carry more instruments to study Pluto and its moons in detail. An orbiter would be able to help answer many of the questions that New Horizons left behind. According to Tiffany Finley at SwRI:

This tour is far from optimized, yet it is capable of making five or more flybys of each of Pluto’s four small moons, while examining Pluto’s polar and equatorial regions using plane changes. The plan also allows for an extensive up-close encounter with Charon before dipping into Pluto’s atmosphere for sampling before the craft uses Charon one last time to escape into the Kuiper Belt for new assignments.

The Pluto orbiter could use the same xenon ion propulsion system that the Dawn spacecraft used to go to Ceres and Vesta. Stern said:

Who would have thought that a single mission using already available electric propulsion engines could do all this? Now that our team has shown that the planetary science community doesn’t have to choose between a Pluto orbiter or flybys of other bodies in the Kuiper Belt, but can have both, I call this combined mission the ‘gold standard’ for future Pluto and Kuiper Belt exploration.

A Pluto orbiter would, however, need a much better communications system. It took New Horizons 16 months to transfer all of the data collected back to Earth, and the spacecraft only had 16 GBs of data storage. 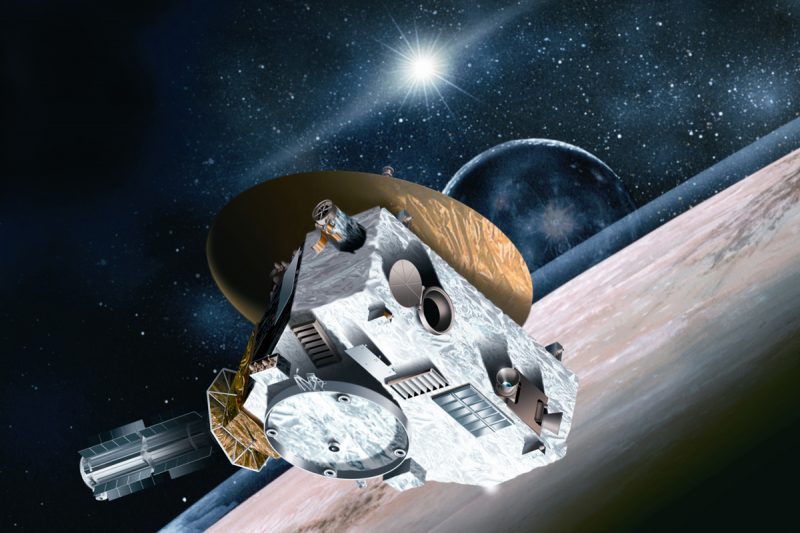 Artist’s concept of New Horizons during its flyby of Pluto on July 14, 2015. The new orbiter would be able to stay much longer and have more instruments to study Pluto and its moons in detail. Image via NASA/UFC Today. 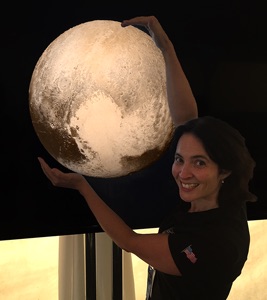 Carly Howett at SwRI, who is leading the new study to send an orbiter to Pluto. Image via SwRI.

When New Horizons reached Pluto and its moons, it found exotic worlds full of surprises.

Rather than just a cold, frozen and inert body, Pluto was revealed to be surprisingly geologically active, with vast plains and glaciers of nitrogen ice, possible ice volcanoes, tall mountains of solid water ice capped with methane snow and unusual tall “spikes” of ice that resemble penitentes on Earth. Its very thin atmosphere is hazy with possible small clouds. There is even evidence that Pluto – of all places – may still still have a liquid water ocean deep beneath its outer crust. How cool is that? New Horizons only had a brief look at Pluto, but it was enough to revolutionize our understanding of this little, distant world and its moons.

Pluto’s largest moon, Charon, has large canyons, an odd isolated mountain sitting all by itself in a depression (another possible ice volcano), and a reddish northern polar cap.

New Horizons later went on to visit 2014 MU69, aka Ultima Thule, a much smaller Kuiper Belt Object (KBO) far beyond Pluto. Pluto is the largest known object in the Kuiper Belt, a giant ring of asteroids orbiting the sun out past Neptune, and similar to the main asteroid belt between Mars and Jupiter.

The New Horizons mission was phenomenal even though it was just a brief flyby. Who knows what an actual orbiter around Pluto might find?

Bottom line: After the highly successful New Horizons mission, NASA is now considering sending an orbiter to Pluto, with SwRI being awarded funding to study the exciting proposal.